Video games have come a long way since Pong™. When the concept of gaming was first introduced in the 1950s, it was considered a technological oddity. Since then, we’ve seen an evolution of mind-blowing games and consoles played and beloved by millions of users.

Now gaming is set to take its next leap forward with Google Stadia — the company’s first entry into this market. Looking to revolutionize the medium, Stadia is the first gaming system to be entirely cloud-based, which means no bulky console taking up space on your media cabinet. Designed with simplicity in mind, it greatly streamlines the process of gaming by reducing loading times, and includes both single and multi-player options. It’s also priced lower than most gaming systems by several hundred dollars on average when compared with current consoles.

Some of Google Stadia’s best features include support for 4K HD video and 5.1-channel surround sound. It’s worth noting, however, that these only come standard with Stadia Pro, the premium version (and currently the only version available), which has a recommended optimal online speed of 35Mbps. The entry-level version, Stadia Base, is set to launch some time in 2020. It will offer up to 1080 pixel resolution, a frame rate of 60 FPS (frames per second) and stereo sound. The recommended minimum online speed for Stadia Base is 10Mbps (megabits per second), which gives you screen resolution of 720p at 60 FPS.

To try out the system for ourselves, we purchased the Google Stadia Founder’s Edition. This comes with four free games and a three-month subscription to Stadia Pro, which offers discounts on most Stadia titles. Out of the box, it’s effectively game-play-ready, minus one thing — a surround sound system. If you’re using TV speakers for sound, you’ll be missing out on the 5.1-channel output capability of Stadia. There are plenty of solutions out there, but if you don’t have one already in place and are looking to get started, you might consider the Yamaha MusicCast Bar Bundle. This includes a Yamaha MusicCast BAR 400 sound bar and two MusicCast 20 speakers; the latter give you wireless rear surround sound without the need to run speaker wire through walls or under the floor.

To enjoy a surround sound system with Stadia, there are a few steps you’ll need to follow. Let’s take a closer look at what’s involved.

Each Stadia bundle comes with a Google Chromecast Ultra™ device, an official Stadia controller (which connects to the Chromecast Ultra using a supplied USB-C cable), a charging cable, and a power supply with an Ethernet port for a faster internet connection. Also included is Chromecast registration information and controller connection instructions, along with information about how to buy games and how to start playing each game.

The setup process requires a Google Pixel™, Android™ or iOS smartphone. Start by downloading both the Google Home™ app and Google Stadia app. (They’re available in the Google Play™ Store as well as the Apple App Store®.) 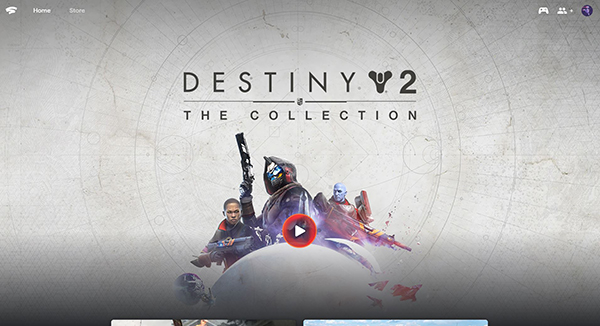 To sign up with Stadia, you’ll need an access code (this is sent by Google to the email address you used to purchase the system). You can currently only play games on your phone if you’re using selected Google Pixel models such as the Pixel 2, Pixel 3, Pixel 3a and Pixel 4, but Google has said that Stadia gameplay will be available on iOS and Android phones at a later date. Playing on a smartphone requires plugging the Stadia controller into the phone via a USB-C cable (you’ll have to buy one separately since you can’t use the one included with the bundle). To play on a PC, you’ll have to open Stadia through the Google Chrome™ browser, and you’ll also need a USB-C cable, but you can use the one supplied in the bundle. If you prefer to use a controller from a different console, Google Stadia is compatible with Xbox® One, Xbox 360, Switch™ Pro and DualShock™ 4 controllers as well.

Adding 5.1-channel surround sound to your Stadia gaming experience is fairly straightforward — all you have to do is plug your Chromecast Ultra device into a TV that has HDMI® eARC (enhanced Audio Return Channel), which will then feed the audio to a connected AV receiver. Alternatively, you can go through an AV receiver first using an HDMI cable, but you may need to enable 4K HDMI pass-through mode on the receiver to enable 4K gameplay if you have a 4K TV. For games to stream in 5.1-channel surround sound through Stadia, you’ll need to have an internet speed of at least 20 Mbps, which includes support for 1080p at a frame rate of 60 FPS.

To confirm you’re playing with 5.1-channel surround sound, open the Stadia menu on your Chromecast Ultra and select the Connection panel. Look for the 5.1 icon. If it’s there, you’re in business. As long as you have a sufficiently fast internet connection, all of Stadia’s top features, including 4K Ultra HDR video and 5.1-channel surround sound, should work with most games.

Since the Founder’s Edition is considered by many to be a Beta version, there may still be some things Google is working to improve. Luckily, we were testing the system with a Yamaha AVENTAGE RX-A1080 AV receiver, which comes equipped with Surround:AI, a unique proprietary artificial intelligence system. Since the games that came with our Founder’s edition purchase (including Destiny 2 and Tomb Raider: Definitive Edition) have 5.1-channel surround soundtracks, Surround:AI was able to decode it and distribute audio to the rear channels during gameplay, delivering the kind of immersive sound and sound effects one would expect. If you don’t have an AV receiver that is equipped with Surround:AI and can’t get 5.1-channel surround to work with Stadia, you may want to consult Google Stadia’s official troubleshooting guide online here.

If you’re looking for something with a lower price point but similar features, consider using a sound bar like the Yamaha YAS-209, which comes with a wireless subwoofer. Not only can a product like this add lifelike realism to your gaming experience, it can also expand the playing space as well with modern features like DTS® Virtual:X™ virtual 3D surround sound, which creates the sensation of height to create spacious 3D sound without the need for in-ceiling or upward-firing speakers.

If you’ve done a search for Google Stadia, you’ll inevitably find some critical reviews. While we didn’t encounter most of the issues being debated online, they are worth covering here so you can make the most of your Stadia experience.

First off, each controller will need to be paired separately to your Chromecast device using the Stadia app. If you’re having trouble connecting, try common troubleshooting tips like starting over the controller setup process once or twice, restarting the Chromecast device or resetting your Wi-Fi router.

Players with data caps on their internet service could also run into this problem since each game uses an enormous amount of data to run over a long period of time. To speed up your gameplay and avoid latency problems (which result in a delayed response to a gameplay action), keep your router within range of all gameplay devices but maintain a distance of at least two feet from the router. Turn off any video or music that’s streaming on the same network as well.

Also, if you’re playing on a 4K TV, it’s not recommended to play for more than two or three hours at a time (based on some user reports online). The Chromecast Ultra device has been known to overheat when streaming 4K content, which results in the system shutting down in the middle of gameplay as a safety feature. If you do play for long periods, be mindful of this.

As you dive into Google Stadia with a surround sound setup, remember that this system is still in its infancy stages and will likely continue to improve over time. But as long as you have quality equipment in place, your gaming experience should be comparable with other consoles and the best forms of media content available today. Time to start playing!

For more information on how to use a home theater system for gaming, check out the following blog articles:

How to Shop for a Surround Sound System

Click here for more information about Yamaha speakers and subwoofers.

The Most Awarded Music Instrument Brand in Drum Corps
Editor’s Corner: The Key Is Key