It doesn’t seem all that long ago that Steinberg released Cubase 10, with its many new tools and capabilities. Now Cubase 10.5 has arrived. This latest version brings with it an abundant haul of innovative features for music production and film scoring. Some of the additions are only for Cubase Pro, but many are for Cubase Artist and the soon-to-be-released Cubase Elements 10.5 as well.

Let’s dive right in and take a look at what’s new:

– Spectral Comparison EQ allows you to compare the frequency content of different tracks and adjust their EQ as needed. It gives you a unique view of your music, helping you clean up your mixes more accurately by creating frequency “holes” for each instrument. (Cubase Pro only.) 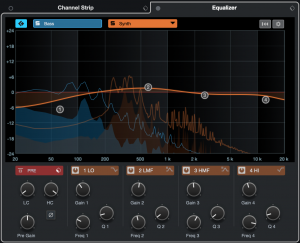 – Import Tracks from Projects. Now you can take a track or tracks from one Project and import them seamlessly into another Project. This not only allows you to import individual tracks, but also Group, FX and Folder tracks. An Auto Map feature ensures that, if you import a track with the same name as one in your Project, Cubase 10.5 will automatically align them. (Cubase Pro only.) 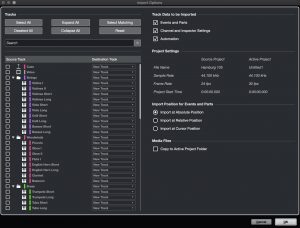 Cubase 10.5 Pro allows you to import tracks from other Projects.

– Video Expert rendering makes scoring-to-picture easier than ever before. You’ve long been able to load videos into a Cubase project and create a musical or audio score that syncs to the picture. But with Cubase 10.5, you can also render an MP4 video file — or even just a selected range of the video — with timecode, which combines your audio (at 16-bit 44.1 kHz or 48 kHz quality) with the video. (Cubase Pro, Artist only.) 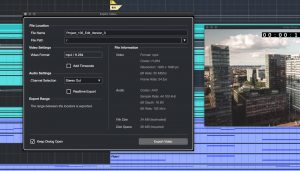 – Normalize by LUFS. Loudness Unit Full Scale (LUFs for short) has become an important measurement of loudness in the pro audio world. Cubase 10.5 Pro users can now normalize audio by LUFS in addition to other units of measurement. (Cubase Pro only.)

– Padshop 2 is a new version of the granular and spectral synthesizer plug-in that has been included with Cubase for many years. It now offers a whopping 570 presets and 570 pre-produced samples; in addition, it lets you import and redesign your own samples. (Cubase Pro, Artist only.) 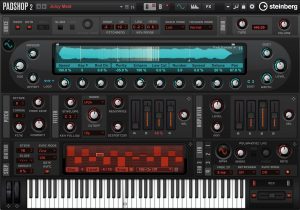 – Colorized mixer channels. In previous versions of Cubase, when you colorized a mixer channel, the color you selected was displayed on a small strip at the bottom of the channel. Now you can apply the color to the entire channel strip, making it easier to differentiate channels when you’re looking at a large session. (Cubase Pro, Artist only.) 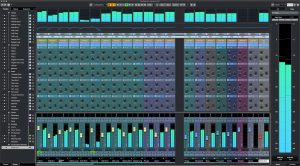 Now you can assign colors to mixer channels.

– Combined Select Tools mode allows you to use selection tools for objects and ranges simultaneously — something that had to be done separately in the past. You’ll be able to work faster and easier when editing in the Project window. (All versions.) 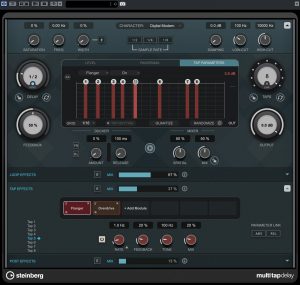 – Retrospective MIDI Record is a returning feature (and a pretty mind-blowing one at that!) in which Cubase not only remembers MIDI parts you played with the transport stopped or during playback but can then import them into your track. This is enhanced in Cubase 10.5, which allows you place the resurrected parts in stacked-cycle or continuous configurations across individual tracks — there can even be different retrospective recordings per track. (All versions.)

– Score Editor improvements. For those who like to work in standard notation, Cubase 10.5 brings numerous additions and refinements to the Score Editor. For example, there’s a revamp of the Note Ruler and a new Graphic Snap feature that makes it easy to position rests and repeat markers in your score. (Cubase Pro only.)

– Improved Safe Start mode. When you have glitches that you suspect come from non-Steinberg plug-ins, it’s comforting to know that you can use Cubase’s Safe Start Mode, which lets you start up without loading any third-party plug-ins. Steinberg has improved this feature in 10.5, making it even easier for you to troubleshoot your system. (All versions.)

– New plug-ins for Cubase Elements. Steinberg will be beefing up the plug-in lineup in Cubase Elements 10.5 with the addition of three handy ones: Stereo Delay, De-esser, and the reverb processor Roomworks.