From their workshop/showroom located in Central Florida, husband and wife Justin and Jina Elliott perform what can only be called piano alchemy — an almost magical process of transforming Yamaha pianos into whatever their clients can imagine. Their company, J. Elliott and Co., is dedicated to perfecting the sound and optimizing the feel of the pianos they customize, while matching the look of each instrument to the environment and personal taste of the owner.

The art of customizing pianos is a niche, to be sure, and it’s one that J. Elliott and Co. have created for themselves. It often involves coming up with new colors or veneers to help the instrument better fit into the décor of a room or stand out spectacularly on a concert stage or film set, but also sometimes includes redesigning parts like the legs, music stands and benches. Justin and Jina’s star-studded client list includes The Piano Guys/Disney, David Foster, Andrea Bocelli, and most famously, Prince, for whom they created a custom purple piano. 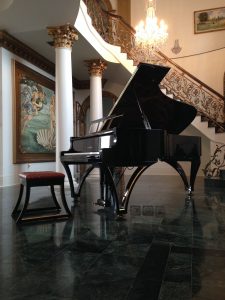 Justin got interested in piano as a thirteen-year old, when his parents bought an old baby grand piano. He quickly became fascinated by how it worked, and even tried to fix aspects of the instrument after asking a litany of questions of the piano tuner that would visit. This led to an introduction to well-known piano technician Susan Graham, who mentored the youth and eventually got him accepted into a rigorous Yamaha training program, which he graduated at the ripe age of 17 — the youngest person to go through the company’s comprehensive courses at the time. During those classes he learned skills such as basic piano regulation, hammer replacement, voicing and concert tuning, as well as Disklavier maintenance and calibration.

During the ensuing years, Elliott began to dream of new design ideas, drawing sketches, and refining his ideas until, in 2001, he produced his first curved leg. Some years later, this became part of Justin’s first custom piano — a modified Yamaha C7 that he called the Royal Ebony. Much to his surprise, tests revealed that the curved design of the legs had a positive effect on the sound of the instrument too!

Let’s take a look at some of J. Elliott’s most interesting designs through the years. 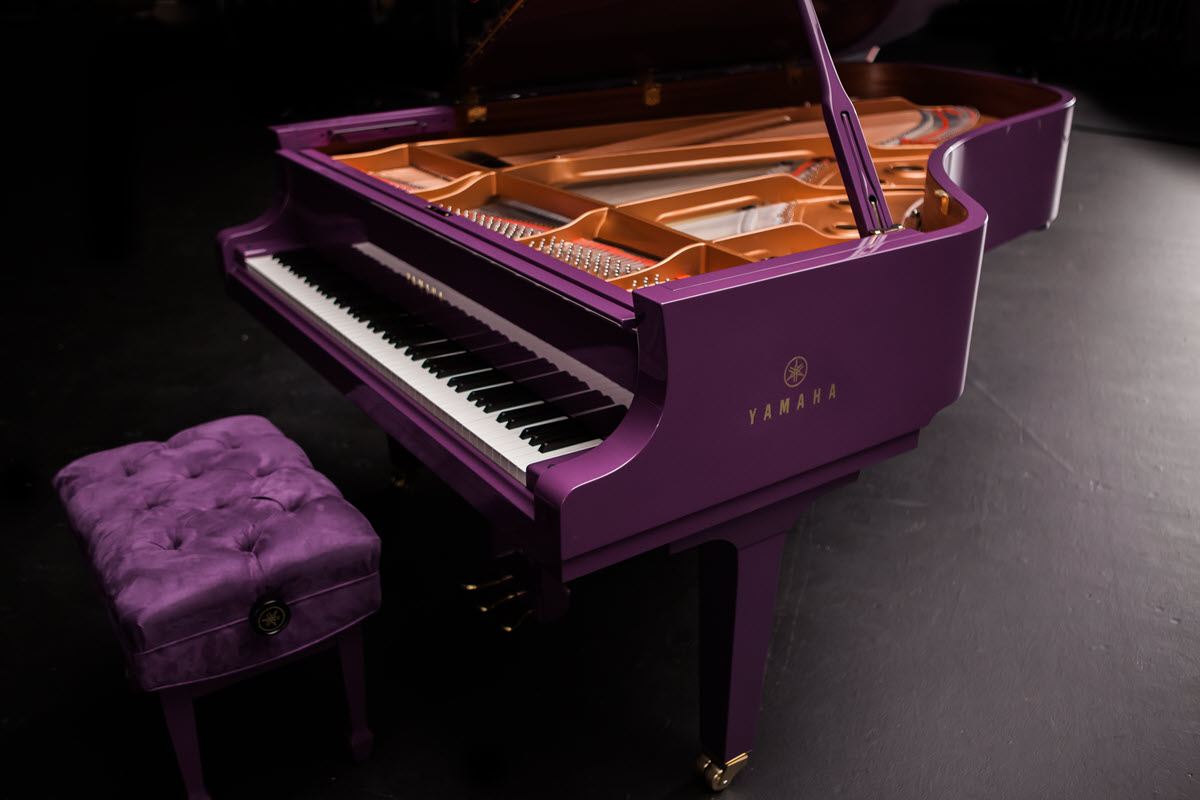 In 2015, representatives for Prince reached out to Chris Gero, founder of Yamaha Entertainment Group of America, about making a purple piano for Prince’s upcoming Piano & A Microphone solo tour. “It was so exciting to get that call,” says Justin. “It was kept very quiet; only a few people knew about it and were part of the process. He had chosen a Yamaha C7XSH model and wanted it to be painted a very specific color purple. I was sent a tiny piece of suede from one of his couches to match, and we went back and forth with him a number of times until he was satisfied. I had to use a lot of different gloss additives for the paint to make it really pop under stage lights.” The color, in fact, went on to become an official Pantone color: Love Symbol #2. 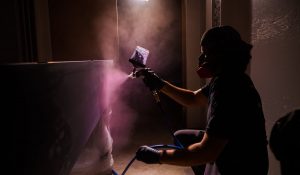 “There was a lot of dialog between Prince, Yamaha and myself,” Justin recalls. “For example, he already loved the piano, but he had some specific requests for the touch and response of the keys — he had great touch and control.”

After about a week after receiving the piano, Prince tweeted: “BOOM (FROM LOTUSFLOWER) ON THIS NEWLY ARRIVED PURPLE PRESENT FROM YAMAHA … ‘RESOUNDING!’”

“On April 16, 2016,” said Chris Gero in an article in the Orange County Register, “Prince invited a small crowd to a music party at Paisley Park … The piano was covered with a purple cloth. He had canceled recent shows in Atlanta, and rumors were flying that he was very sick. ‘Wait a few days before you waste any prayers,’ Prince told the crowd. Then Prince dramatically pulled the cloth off the purple piano. He played chopsticks first, then a few minutes of classical music without singing.”

“It’s the last instrument Prince ever played in public,” adds Justin, “which is a deep honor for all of us involved. I’ve been told by so many people who were around him that the piano brought him so much joy.” 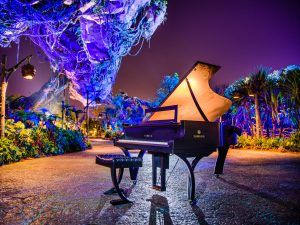 “This piano was a commission from the Piano Guys for a video they were shooting on the Avatar set at Disneyworld in Florida, so Disney was also very involved,” says Justin. “I had to come up with a pretty neutral design that didn’t compete with the space around it, but I wanted to give it some special lines and look, even though we had a very short time to do it. So we started from one of my existing designs that I call the Grand Rossa [see below], which has really striking leg and bench lines. I changed it to satin black, to fit in as a neutral tone, and I removed a couple of pieces here and there to make the lines a little cleaner. We went back and forth a bunch with ideas, especially about the finishing sheen to put on the piano.” 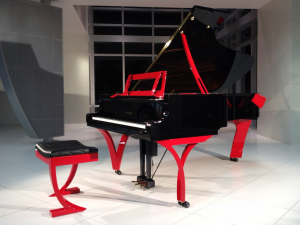 “The Grand Rossa came from a request from a Ferrari enthusiast,” says Justin. “He wanted a Disklavier piano for his garage/man-cave, which would be sharing space with his car collection. So I did a lot of research on Ferraris, and the 1957 Testa Rossa had a lot of good lines and inlets that I incorporated into my design. Look at the tail leg that is at the far end of the piano, and how the design element sweeps across the side of the piano. A lot of people say it looks like it’s just floating. That came directly from the back quarter of the car’s design. I wanted to show the curve of the piano on the back end, and when you are adding massive red highlights to a solid black piano, it really defines it.” 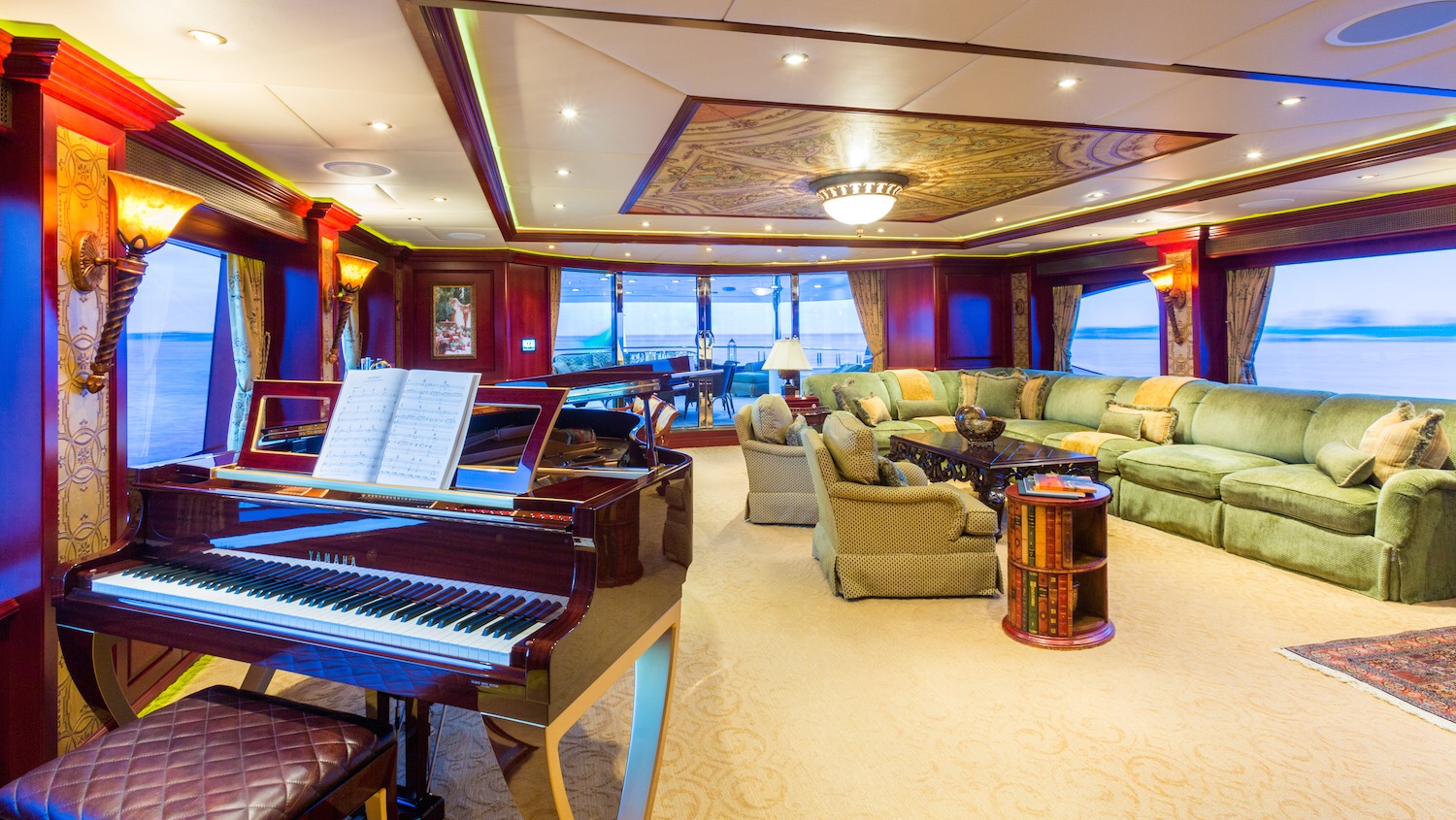 The legs for this piano were designed to match its environment — the hull of a luxury yacht. “It’s mahogany to match the ship’s interior with gold lines everywhere,” explains Justin. “We went through a lot of veneer to get as close a match as possible. It’s not just about color, but it’s the grain in each piece and based on the angle you view the piano from. Since the piano is in open air, and out to sea a lot, they had a custom heavy-duty, marine-grade fire-retardant cover made that goes all the way to the ground, so they can pack it up safely when they’re underway, or if they’re leaving doors open for an extended period of time.”

All photographs courtesy of J. Elliott and Co.