Music Direction in the Digital Age

The concept of the TV talk show with a house band has been around since the 1950s, but technology has enabled the bands of today to do things never before imagined. Leading the way in these forward-thinking methods is Grammy-winning Yamaha Artist Jason Halbert, music director for The Kelly Clarkson Show.

Halbert is a keyboardist who honed his chops on the road, working for acts such as Lady Gaga, Billy Ray Cyrus, Reba McEntire, Clay Aiken, Justin Guarini and most importantly, Kelly Clarkson. His touring duties have taught him all aspects of the business: not just playing and leading a band, but related skills such as synthesizer programming and creative use of computer software.

A Gateway to Success

It was a chance backstage meeting with then-American Idol judge Randy Jackson while Halbert was on tour with Nick Carter of the Backstreet Boys that proved to be a gateway to success. Nine months later, Randy called out of the blue and offered Jason the job of putting together and leading the band for the winner (Kelly) and runner-up (Justin Guarini) of Idol’s first year competition. “That one call really changed my life,” recalls Halbert. “I’ve been with Kelly for every show since that first tour: it’s been quite a journey.”

Jackson became an important mentor to Jason. “Randy taught me the power of staying in your lane and serving the music and the artist,” Halbert recalls. “He taught me to find the joy in picking the right musicians, finding the right parts for the song and for the artist, and not holding your own musical tastes as so precious.”

After years of touring, recording, songwriting and production, Jason found himself with a fresh challenge: assembling a band for the TV talk show that Clarkson launched in 2019. Being a new and untested show, the production had to start small, so Halbert was limited to using just a four-piece ensemble — keys, guitar, bass and drums — but his extensive technology chops aided him in putting together backing tracks to augment the sound when needed.

As Halbert notes, the demands of preparing and delivering a TV show are daunting. “When you’re touring, you have four to six weeks to put a two-hour show together, and then you go out and play that for a year or more,” he says. “Television is a whole different medium because of the workflow and time constraints. It’s all about time management, fast learning, quick improvisations and knowing a huge variety of genres and styles. On tour, whatever happens on any given night is a momentary thing. On TV, your performance lasts forever, so you want to deliver the best quality within those really tough time limitations.”

The pressure is even more intense when doing a TV program that airs daily, as Clarkson’s does. “We’re doing 180 shows a season, we’re taping six shows a week — two a day — and I get one four- to six-hour rehearsal with the band every Monday,” Halbert explains. “During that session we have to learn six new songs for Kelly to perform, plus 12 bumpers [short clips of music used to transition in and out of commercial breaks – Ed.] per episode, so you’re looking at 80 pieces of music per week.”

Creating so much music with so little rehearsal requires a great deal of organization and adaptability. The process starts with Jason writing the bumpers — usually just eight bars going into the break and four bars coming out — but he strives to make each one musically meaningful. He mocks them up using computer software and sends them out for the band to listen to. The on-set audio system allows them to quickly preview each cue in their in-ear monitors right before they need to play it, as a quick refresher, and to establish the tempo. This also allows Jason to rapidly shift gears if there’s a change in mood during the talk segments and he needs to call up a more appropriate cue.

For the songs that Kelly performs, Halbert works with the show’s vocal director beforehand to pick the right key for her and work up an arrangement, at which time he also puts together a quick recording with guide vocals. The band members learn their parts, go over them at the weekly rehearsal, and then, just before taping, they get together with Clarkson for a quick run-through. “This works for us because we’ve been together for 18 years now, [so] at this point I know what [Kelly] likes,” Jason explains. “There have only been a handful of times where she listens to my arrangement and says, ‘You’ve cut out my favorite section!’”

A Change in Workflow

Of course, the events of the past year caused a significant change in the workflow. After taking a short hiatus, the show decided to come back with everyone working remotely from home. The amount of weekly prep and music remained the same, but now the band had to record their parts individually, using their smartphones to capture their performances. Kelly Clarkson too would be performing from her home in Montana, recording into a smartphone as she monitored the band’s backing track via earbuds. “It amazes me the quality of sound and performance we got from Kelly that way,” Halbert says. “We learned to do a little bit of processing to get rid of noise and some of the room sound.… It worked surprisingly well.”

Thankfully, that only lasted two months, and then Jason and the musicians returned to the TV studio, where they all had enough space to perform while socially distanced from one another. Kelly remained at home, but at least now the band could play live together, which gave a new level of energy to their (and Kelly’s) performances. At some point, the producers came up with the idea of having screens placed in the seats so the band could have a live-but-virtual audience again. When Halbert saw how well that worked, he asked if the same approach could be taken to add some extra players when needed: horns, strings, even background vocalists. The producers quickly agreed, and so another level of pre-production fell on Jason’s shoulders; now, not only would he have to arrange the tunes for the expanded lineup but the extra players would have to record their parts at home (both sound and visuals), and then the band would be play live along with those pre-recorded parts for a fuller and more visually appealing presentation. This innovative approach reached a peak for the show’s 2020 Christmas specials, where the band was supplemented by as many as 11 additional players.

Jason’s main show rig includes a classic tonewheel organ and a Yamaha MONTAGE synthesizer, as well as a Clavinova piano. “I have a MONTAGE in my office where I do all my arranging / pre-production work,” he says. “I use it for literally everything except organ, and I love the Live Set feature: I use it to run my whole show setup.”

“Not only does the MONTAGE have great [presets],” he adds, “but I’ve been taking advantage of their sound-sharing site (Soundmondo) for when we are doing ’80s and ’90s tunes. It takes me no time to go there, type in the song name, and bam! — there’s a perfect recreation of the sound. All the bread-and-butter keyboard sounds I need are so perfectly dialed in that I’m just pulling up presets. I’d love to be that guy that tells you I am crafting these amazing custom sounds, but I’m not, and I don’t need to be.” 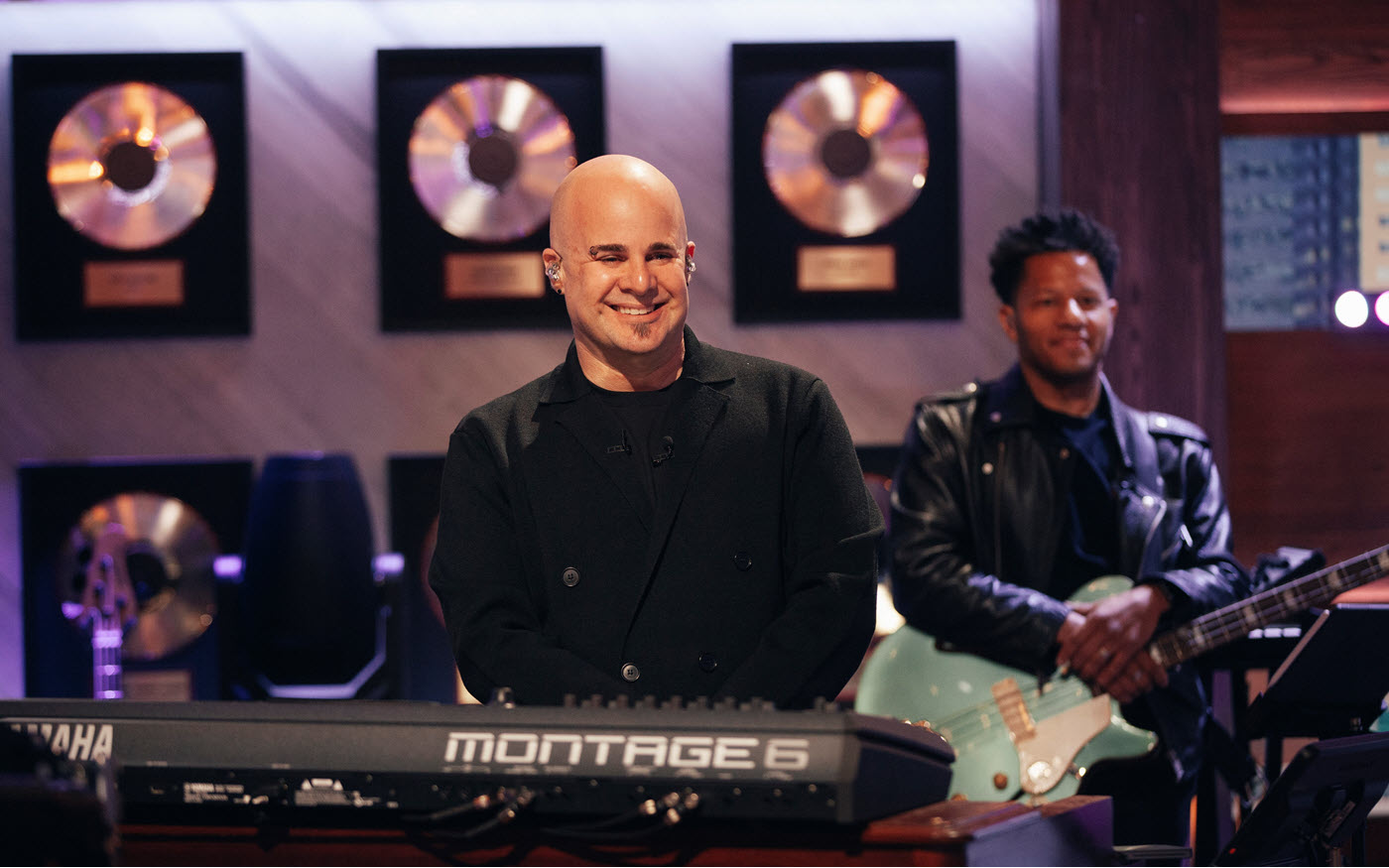 Playing for the Screens

Looking ahead, Jason says this: “We’ve hit a good stride, and things are running smoothly. Of course we want to get back to having a live audience and the energy that brings, but we’re happy to be playing for the screens until then.” And so too are the millions of people who watch The Kelly Clarkson Show.