Reflections on Black History in Music

Three Yamaha artists on their musical influences and hopes for the music industry.

In commemoration of Black History Month, I recently had the opportunity to speak with celebrated Yamaha artists Dan Rouse, Lara Downes and Terri Lyne Carrington about the legacy of Black music via their personal musical influences. They also offered their hopes for the music industry going forward — to not only recognize the past, but build toward a more equitable future.

Looking to The Past

In a career spanning forty years, acclaimed jazz drummer, composer, activist and educator Terri Lyne Carrington has earned the rare distinction of playing alongside some of the most influential jazz musicians, including Dizzy Gillespie and Herbie Hancock. Carrington was formally mentored by jazz greats Jack DeJohnette and Wayne Shorter, but hesitates to offer up just one or two names as influences. “It’s all a continuum,” she says. “It’s about building on the things and the people that came before you, and it encompasses all of these other people, including people who weren’t famous.”

As a multifaceted artist, Carrington has looked to many individuals to inform her work as an educator as well as a gender justice activist. “When I started teaching 15 years ago, Roy Haynes was a big influence, because I realized how important he was in the modernization of jazz drumming,” she explains. In addition, her close friendship with Angela Davis and encountering the music of Sweet Honey In The Rock® as a teenager opened her up to the ways social justice could guide her own work. “[Sweet Honey In The Rock and its founder Bernice Johnson Reagon] were big influences on me because it was the first time I really connected with some of these subject matters that I hadn’t been thinking about before. The power of putting this type of subject matter in songs is so important and impactful.”

For musical director and keyboardist Dan Rouse, an early love of Stevie Wonder has been a constant source of inspiration. “Growing up in a very Christian Black home, we couldn’t really watch or listen to much other than gospel, but Stevie Wonder was one of the exceptions,” he remembers. Rouse’s love of Stevie Wonder has served to influence his approach to music when working with artists such as Patti LaBelle and the Village People. “He really shaped how I think as far as being new and fresh with my sound,” Rouse says. “I’m always trying to be creative and think outside the box.”

For centuries, the contributions of Black composers in Western classical music have been overlooked. Pianist Lara Downes recalls, “As a classically trained artist I literally had no role models or mentors or teachers in my actual, physical life who were of color. The only person that I had any contact with was Andre Watts, who was touring extensively.” This lack of representation galvanized Downes to do her own research and find ways to shine a light on unsung composers of color. “That’s the motivation I’ve had to seek out my connections with this lineage and legacy of Black composers, because it just felt so alienating and isolating to be making my musical way [with a canon that] didn’t reflect me at all.”

Discovering a piece by Florence Price around 15 years ago changed the course of Downes’ career. “I found one piece of hers and I started playing it a lot and experiencing a really intense response to it. It’s a piece that takes the spiritual ‘Sinner, Please Don’t Let This Harvest Pass’ and turns it into a very romantic piano showpiece. Years later, lots of her music was found in an abandoned house outside Chicago and I started going into those manuscripts. Just last year I put out an album of her piano works. The most meaningful thing to me is that she was [a Black woman] operating in this totally white male world, and yet the sound of her music remains authentic to herself.”

The works of the great musicians that influenced Carrington, Rouse and Downes have also shaped how they consider the legacy that they themselves will leave. For Carrington, it’s less about stature as one of the top drummers in the world and more about what she can offer in working toward a just society as both an artist and educator. “I feel like I’m just getting started. Once I embraced gender justice in music, everything else opened up. The universe supported me to dedicate myself to this work. That’s how I know I’m doing the right thing.”

Similarly, Downes hopes that her presence can offer support to future generations of classical artists. “[I want my legacy to be] just that I was here, so that the next generation of little brown and Black kids who might want to make a way in music don’t have to look hard to find someone who looks like them — that they don’t have to dig in archives and bang on doors, and can just live their lives and make their music in a space that acknowledges them and honors them — a space where they belong.”

For Rouse, daring creativity is the key to the legacy he hopes to leave behind. “I want to be remembered as someone who explored. There were times where we were looking at music and saying we got it all figured out, and then jazz comes [along], then rock. All these genres came about from someone taking the time to explore. In my years of playing, I feel like I’ve been getting closer to finding a sound that’s new and fresh, and that’s what really inspires me. I want to be known as someone who introduced something to the world.” 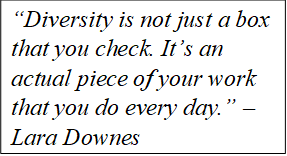 The global events of the past year have had significant impact upon the livelihoods of many artists and musicians around the world. For the fortunate musicians who have been able to maintain their artistic output — or even in some cases increase it — this moment has also been a time to reflect on how the industry can change for the better. Carrington hopes that these events have been a wake-up call for everyone, especially as it pertains to the values we want to uphold. “We have to look at how we’ve invested in or benefited from a racist and sexist culture. Everybody has to look at that, starting with themselves,” she says.

Downes is hopeful that in the near future, the world will include more care, justice and representation in a way that moves beyond cosmetic fixes and is anchored in real change. “I hope that we hold onto the lessons that we’ve learned about balance, respect, and redefining what we mean by audience and community,” she says. “I’ve seen artists be so innovative and courageous this year. The conversations that I’m having with institutions are about building long-term relationships and about really serving local communities. Diversity is not just a box that you check. It’s an actual piece of your work that you do every day.”

Want to learn more about the works of Black composers? Be sure to check out Rising Sun Music and follow their Spotify® playlist.