These are the woods that go into acoustic guitars.

The best acoustic guitars are made out of wood. This remains as much a truism in the 21st century as it was in the 18th, despite huge recent advances in the development of alternative guitar materials (particularly carbon-fiber). There are three reasons why:

Although what constitutes a great-sounding (and great-looking) guitar comes down to personal taste, there is general agreement on what the best tonewoods are for acoustic guitar making. In this article, we’ll take a look at four key wood families — spruce, rosewood, mahogany, and “exotics” like bear claw spruce, cocobolo and koa — and talk about how Yamaha makes use of each of these.

This evergreen, found in northern temperate regions of the globe, is literally top choice: the ideal wood for the soundboard, or top, of an acoustic guitar. Its look — light in color, even in grain — is appealing though somewhat plain; what sets it apart is its beautiful tonal properties. Acoustic guitars made with spruce are an excellent choice for a player with a softer touch as they respond well to that kind of touch — they don’t sound quite as good when played aggressively.

Sitka spruce, from Canada and Alaska, and Engleman spruce from British Columbia get especially high marks from the luthiers at Yamaha. Sitka is slightly harder than the average spruce, while Engleman is somewhat softer, but both are prized for their distinctively rich mid and low range. Ezo spruce from Hokkaido, Japan, is also highly regarded, but depleted resources have made it hard to obtain new supplies.

Named for its distinctive sweet smell, rosewood is hard but porous and a natural choice for the back and sides of an acoustic guitar. It has the double advantage of looking gorgeous (it comes in an astonishing range of browns and purples) and sounding rich, warm and loud. Rosewood provides great mid-range as well as deep bass and bright treble. It also offers rich overtones and a high “response rate” that makes for a sharp attack and a lot of resonance.

Unfortunately, its popularity has led to near-extinction in some parts of the world. Brazilian rosewood, a luthier’s favorite for generations, is now listed as an official endangered species, meaning that no new supplies can be made available for sale and international trade of any sort is heavily restricted. Yamaha uses its remaining stock of this wood very selectively; favored alternatives include Indian and Honduran rosewood, which tend to be more purplish with coarser grain markings.

This hardwood is the most commonly used wood for musical instruments because it’s durable, easy to work with and wonderfully resonant (though it doesn’t have the sonic brilliance of rosewood). Like rosewood, it’s employed principally for guitar backs and sides, as well as fingerboards and bridges, though all-mahogany models are not uncommon.

Mahogany produces a strong, earthy midrange tonality with subtle overtones, making for a sound that is often described as “non-abrasive.” Mahogany top guitars are great for playing blues and are also an excellent choice in situations where you are playing with other instruments, since they cut through so well.

The Cuban, Honduran, and Mexican varieties of mahogany are all classified as being “at risk but not presently threatened with extinction.” International trade of these is regulated accordingly, making them more expensive. In keeping with its aim to be environmentally responsible, Yamaha makes very little use of these woods; its luthiers currently instead favor mahogany from Africa.

The coupling of a spruce top with rosewood or mahogany back and sides is a tough combination to beat, because the results consistently sound so good. However, other options arguably have more visual appeal: North American flame maple, for instance, as well as figured ash, bubinga, and the following “exotics.”

Bear claw spruce may not look all that exotic at first glance, but what puts it in this category is its rarity. Basically, it’s spruce with stretch marks, caused by particularly slow and/or stressful tree growth conditions. Some players love these unusual patterns, while others find them visually distracting. The tone of bear claw, which has been used in limited-edition versions of A Series acoustic-electric guitars by Yamaha (such as the A3R BC and AC3R BC), is pretty much what you’d expect from spruce: clear and powerful.

Cocobolo, a dense hardwood from Central America, is stunning in its figuration and color range (from red to black). It also produces a deep sound, with a quick attack and lengthy sustain. Though not often used by Yamaha, it’s become a popular wood for acoustic guitar backs and sides.

Koa, another extremely dense wood, comes from Hawaii and therefore is never in huge supply. Its striking golden color and strong grain markings make it unique and equally good for guitar tops, backs and sides. Its sound is well-balanced but on the soft side — best suited to finger picking. For this reason, guitars made with Koa are geared more toward a living room than a large stage.

Koa is one of those woods that sounds better with time. A guitar with a Koa soundboard will start out life with a very bright sound. But as it ages (the more it is played) it will mellow out and become richer and warmer sounding, with more emphasis of midrange tones.

Yamaha has produced three Koa acoustic guitar models to date, all of them limited-edition: the CSF-100K parlor guitar, of which only 100 were made roughly 15 years ago; the original A Series A4K dreadnought and AC4K concert, introduced more than five years ago; and the new all-solid Hawaiian A4K and AC4K, which will be limited to 150 pieces in the U.S. market: 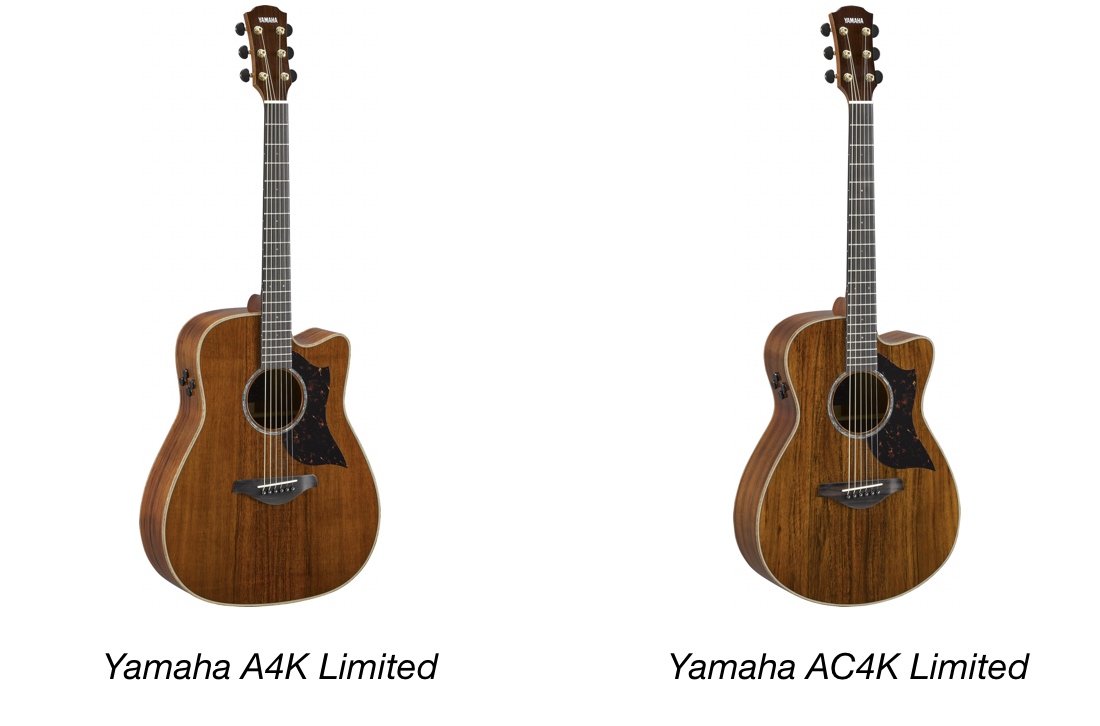 Of course, the wood itself — purchased from the world’s best suppliers — is only one element that distinguishes Yamaha acoustic guitars. For example, because Yamaha owns all of its production facilities, it can store wood in its own climate-controlled space without having to outsource the crucial drying phase. Kiln use is minimal; most wood for Yamaha guitars is instead subject to two different but related natural processes: aging, to cut down moisture content; and seasoning, to stabilize the wood. The end result is a guitar that sounds as beautiful as it looks.