Any lover of video games knows the thrill of unboxing a new game. But imagine the sense of disappointment that would follow if you were trying to enjoy your new game on a system not equipped to handle the latest advances in visual effects and surround sound technology. Whether that means you need a new audio system or that your TV lacks the required graphic capabilities to keep up with high-res rapidly refreshing content, it’s enough to bring out the sad face emoji in any text message.

In an era where technological advances are coming at us faster than Usain Bolt crossing a finish line, it can seem hopeless to keep up at times. That’s where HDMI 2.1 comes in. It’s the latest technology for improving the video speed and quality of your favorite movies, TV shows and video games, along with the dynamic support needed to effectively capture and convey future content.

Are you ready for HDMI 2.1? Here are the ways this exciting new technology will impact your home theater and gaming experience.

The Five Basic Elements of Video

Before we start talking about HDMI 2.1, let’s go over the five basic elements of video:

2. Frame Rate. Notated as frames per second (fps), frame rate is the speed at which video is captured and displayed. The faster the frame rate, the more images are displayed every second, and different frame rates provide different viewing experiences. 24 fps is the most commonly used frame rate for movies because it creates a cinematic look. Most major studios have the ability to shoot at higher frame rates but stick with 24 fps because that’s the quality most viewers are used to. However, newer video games will be supporting 60 and 120 fps modes. HDMI 2.1 provides solutions to issues like the “soap opera” effect (i.e., motion blur) that occur at these higher frame rates.

3. Color Depth. Also known as bit depth, this represents the number of bits used for each color component of a single pixel. When referring to a single pixel, it can be defined as bits per pixel (bpp). The higher the bpp, the more color variations are captured.

4. Color Space. This is an abstract mathematical model that describes the range of onscreen colors as numbers. As technology has advanced, wider ranges of colors are able to be displayed, and color space standards have evolved to support these capabilities. Color space types over the years have included Rec. 601 for SDTV, Rec. 709 for HDTV and Rec. 2020 for UHDTV, which is the latest standard.

5. Brightness Range. This is a core attribute that makes HDR (High Dynamic Range) video come alive. It is the range that allows video to be displayed with brighter whites and deeper blacks, as well as more variations of brightness in between.

The technology was first introduced as HDMI 1.0 and had a maximum bandwidth of 4.95 Gbps (short for Gigabits per second). Its bandwidth originally supported 1080p at 60Hz, along with 8-channel high-resolution audio at 192 kHz/24-bit resolution. Each succeeding update provided increased bandwidth and enhanced features, such as support for DVD audio (version 1.1), sRGB color support (version 1.2), a lip-syncing algorithm (version 1.3) and support for 2K and 4K resolution video, though at lower frame rates. HDMI 2.0 added support for 4K at 60 fps.

Each new version of HDMI has increased the amount of bandwidth.

Lots of acronyms, to be sure … but also lots of great advancements. Let’s take a look at each in turn.

– Variable Refresh Rate (VRR). Of particular interest to gamers and game developers, VRR is a new spin on the concept of refresh rate — it has the ability to vary the frame rate to match the output of the graphics processor (GPU) through the HDMI chain to the supporting monitor. The “variable” part of VRR refers to the way that graphics processors require different periods to render each frame. 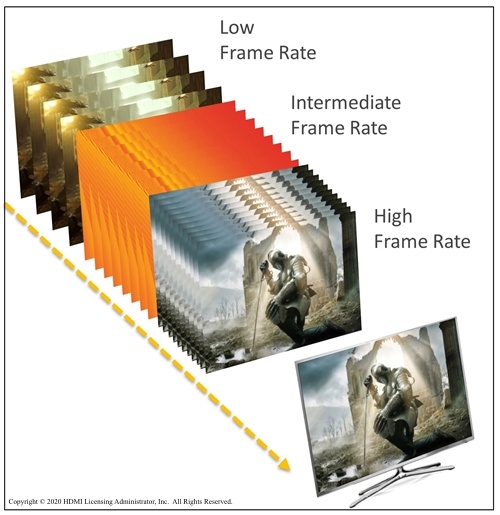 2. Reduces or eliminates judder — jittery images caused by upscaling from the film’s original 24 fps to the 60fps required by a 60Hz television and above.

3. Reduces or eliminates frame tearing, which occurs when the frame rate exceeds your monitor or television’s refresh rate.

– Auto Low Latency Mode (ALLM). Another important enhancement for gaming, this feature tells the display (or AVR) to turn off all of its video processing so that the delay (latency) to display gaming video is minimized. Most video processing features are used for things like adjusting picture settings, upscaling video resolution, or adjusting for interlaced or progressive scan display. Since the game video output is known, these video processing features can be shut off, thus eliminating that processing time. ALLM is sometimes referred to as game mode, though it was previously a manual process. It works by letting a game console send a signal to the display to automatically switch to ALLM. This mode may not be ideal for other types of viewing, however, since some processing features on a TV may stop working in order to reduce latency. That’s why, when the gaming console is shut off, the TV will revert to regular viewing mode. 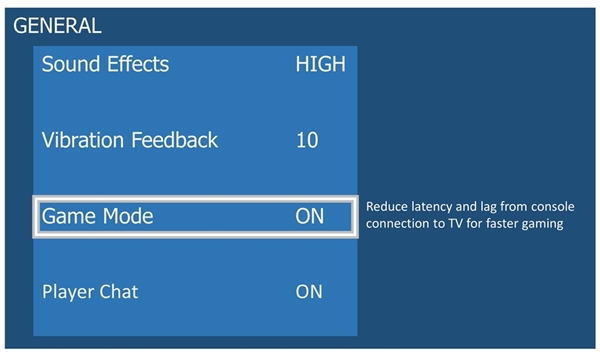 ALLM can be enabled through most TV settings menus.

– Quick Frame Transport (QFT). This feature reduces latency for smooth no-lag gaming and real-time interactive virtual reality. QFT transports each frame at a higher rate to decrease display latency, which is the amount of time between a frame being ready for transport in the GPU (Graphics Processing Unit) and that frame being displayed. This affects gaming performance factors such as the time between when a button is pressed and when the resulting action is seen on screen. The lower the latency, the better the responsiveness of the game.

– Quick Media Switching (QMS). QMS eliminates the delay that can result in blank screens before content is displayed. (This is less significant for games than it is for movies and video.) The VRR mechanism described above is used to eliminate the blackout period when all devices in the HDMI connection chain change video modes. So long as the resolution remains the same and only the frame rate changes, QMS will create a smooth frame rate transition. 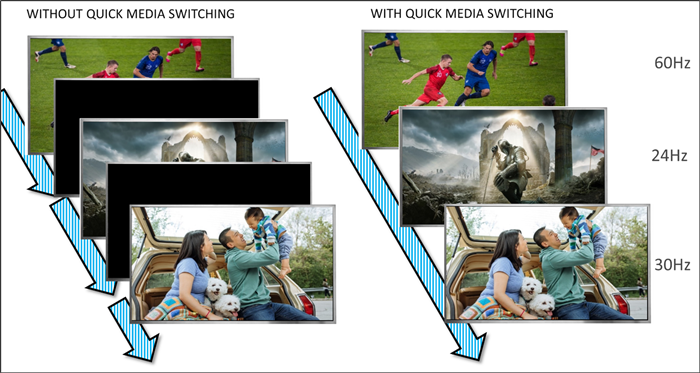 – Enhanced Audio Return Channel (eARC). This feature is already available in many AV receivers, including most current Yamaha models. If you’re unfamiliar with the term, ARC allows audio to be sent from your TV to your AV receiver or sound bar through the same HDMI cable that sends the signal from your AV receiver/sound bar to the TV. The latest version, called eARC, provides increased bandwidth and speed. This allows you to send up to 32 channels of high-quality audio to a sound bar or AV receiver, including eight-channel, 24-bit/192kHz high-resolution uncompressed data streams, enabling content from movies that have Dolby Atmos® or DTS:X™-encoded audio. Learn more about the benefits of eARC here.

– Dynamic HDR Support. Formats such as HDR10+ are also supported to ensure that every moment of a video is displayed at its ideal values for depth, detail, brightness, contrast and wider color gamuts.

HDR has progressed through the years to its current version.

When You’ll Need It

TV manufacturers are just starting to incorporate HDMI 2.1 connectivity in their latest models. But the real need for 2.1 will come when content arrives that requires the features described above. The next generation of gaming consoles, such as the Microsoft Xbox™ Series X, will support HDMI 2.1 gaming features like ALLM, VRR, QFT and QMS to display what the game designer originally intended. It’s likely that some AV receivers will soon provide HDMI 2.1 support too — stay tuned to this space.

Since the biggest benefit of HDMI 2.1 is in relationship to the latest features on gaming consoles and 8K content that are not yet available, it’s not a critical thing to have right this minute … but because it’s backwards compatible with current tech, it wouldn’t hurt to get a jump on things so that when you do need it, you already have it.

One last tip: When you decide to shop for an HDMI 2.1 cable, be sure to verify the cable’s capabilities before you buy, and opt for the shortest cable length required (ideally, under 10 feet). Cable length can have an impact on signal quality because it takes slightly longer for a signal to travel down its full length.

How to Recreate the Movie Theater Experience at Home

How to Connect Nintendo Switch™ to Your TV, Sound Bar or AV Receiver

Gaming in Dolby Atmos: An Interview with Josh Osiris

The History of AV Receivers

How to Use Google Voice Control with Yamaha MusicCast
Tattoo You: Permeating the Parlor With Sound