Students at Caledonia Community Schools can join some unique ensembles — a pipe and drum band in high school (in honor of the school’s mascot, the Fighting Scots) and a percussion ensemble that students from elementary to high school can join.

Strike up the percussion ensemble and bring on the bagpipes.

Extracurricular music at Caledonia (Michigan) Community Schools entertain audiences with a variety of sounds from steel drums and Japanese music to rock ballads. Concerts aren’t just in the school auditorium, either; a surprise bagpipe march might energize students who are walking the halls to their first class.

In honor of the Caledonia High School mascot, the Fighting Scots, the school has a thriving pipe and drum band, created by Kyle Wellfare, director of bands. In addition, students ranging from elementary through high school can participate in the percussion ensemble Strike, which is the brainchild of Don Raaymakers, music teacher for Kraft Meadows Middle School.

Extracurricular ensembles excel at Caledonia due to the collaborative and open-minded culture within the district. “For us, it’s not about the competitive side of [music],” Wellfare says. “We want to encourage students to explore and try things at a high level.”

Caledonia’s administration finds power in pursuing new ideas, including those within the music department. “During my 20 years at Caledonia High School, the administration has always been very supportive of the music program,” says Jim Crites, an assistant principal. “This includes lending support to the teachers as they explore creative and unique ensembles.”

Breathing Life into the Bagpipes

Back in 2011, Wellfare was teaching a music appreciation class unit on Scottish music. Wellfare suddenly remembered that he had a set of bagpipes stored in his office.

“I stumbled my way through explaining what the bagpipes are,” Wellfare says.

Then a student expressed interest in learning to play the bagpipes, considering the school’s mascot. After some networking with adult bagpipe performers in the community, Wellfare decided to make the pipe band a learning experience for everyone — including himself.

Wellfare enlisted the help of Dan Smith, a local piper and friend of Caledonia’s orchestra director, to teach him and his first pipe students. Smith, who has since passed away, introduced Wellfare to Dorothy Wilson, a performer for the Muskegon Regional Police Pipes and Drums, who became a volunteer instructor as well.

Each year, the Caledonia Pipes and Drums band comprises 15 to 20 performers. Some are students and others are teachers, administrators or members of the community.

The group meets Tuesdays and Thursdays, with Tuesdays devoted to teaching new pipers the basics. On Thursdays, experienced players are joined by percussionists, which include snare, tenor and bass drum players.

Bagpipes have a big learning curve. “The first step is you learn the tunes on a chanter, a glorified recorder,” Wellfare says. “If you don’t know songs by memory, playing the bagpipes is nearly impossible.”

According to Wilson, perseverance and motivation are key factors for keeping students engaged during these early stages. “You start out just going up and down the scale,” she says. “It gets boring at first. That’s the hard thing, playing the same tunes over and over again.”

Wilson recommends demonstrating harder tunes as inspiration. “You say, ‘If you keep on practicing, you can play these tunes!’” she says.

Once performers memorize their songs on a chanter, they can start using the pipes. “It’s a unique process,” Wellfare says.

Since its inception, the Caledonia Pipes and Drums band has become a ceremonial staple for school events, performing a procession at graduation every year, leading the football team between the field and locker room, and honoring athletes on senior nights. “It gives me goosebumps to see them perform at school events,” Crites says.

Growing Up with the Drums

While the Caledonia Pipes and Drums band is completing its first decade, the Strike Percussion Ensemble has existed for more than two. Founded in 1997 with six of his private students, Raaymakers registered Strike as a not-for-profit in 2000 and brought it to Caledonia in 2004 when he started teaching at Kraft Meadows. 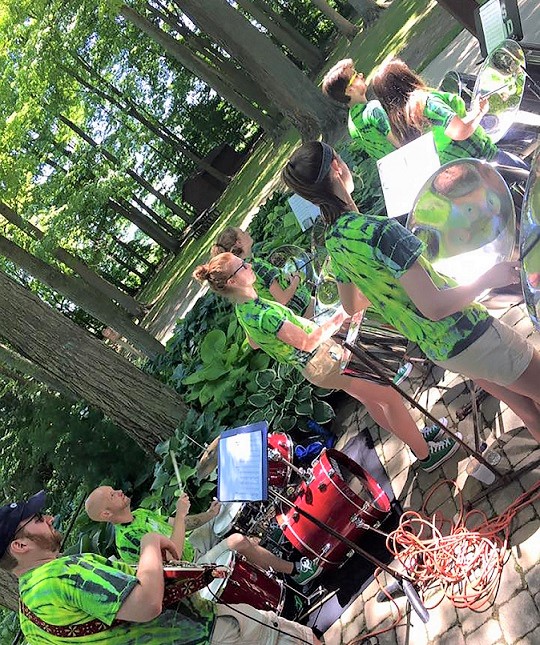 The Strike program has a continuum of levels: 4th and 5th graders can join Lil’ Strikers; 6th through 8th graders can participate in Mini-Strike; and high schoolers can perform in Strike. High schoolers in Strike must also be a part of Caledonia’s curricular band or orchestra.

Strike rehearses at the middle school but performs concerts at the high school in November, March and June. The June concerts feature college-level music by composers like David Maslanka, David Gillingham, Ivan Trevino and Christopher Rouse as well as steel drums, Japanese drums and popular music by bands like Blink-182 and Jimmy Eat World. The Lil’ Strikers make an appearance, joining Strike for the pop songs. Mini-Strike has its own concert in April.

Like the Pipes and Drums band, Strike has become popular with students as well as faculty. “I have attended a number of Strike events over the years,” says Crites who played percussion in his youth. “I have a special fondness for all things percussion.”

In 2018, when Dr. Dedrick Martin became the district’s new superintendent, Raaymakers tried to introduce Martin to Strike and was surprised by his response. “He said, ‘I know what Strike is; I have my June concert tickets!’” Raaymakers recalls.

In previous years, Raaymakers has assembled Travel Strike, which played in places like Disney World, New York City and Hawaii. Travel Strike was scheduled to perform at Disney World in 2020 but canceled the trip because of the COVID-19 pandemic. The group has also appeared at the Percussive Arts Society International Convention. 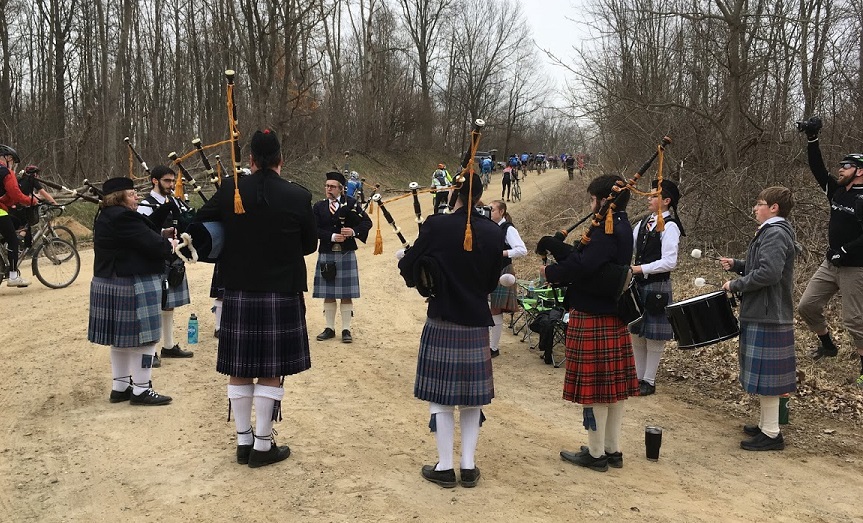 The Pipes and Drums band performs locally but with a wide breadth of paid and unpaid performance opportunities. The Barry-Roubaix bike race is one of the pipers’ biggest annual events. “We stand in the middle of nowhere, and hundreds of bikers ride by us,” Wellfare says. “I always joke that they’re riding fast to get to us or to get away from the sound.”

However, Wellfare says that one of his favorite gigs is the Armed Forces Thanksgiving Parade, which fosters connections within the pipe band community.

The supportive, family atmosphere in the pipe band community has been a force for growth. “If you’re part of a pipe band, you’re going to attract a lot of attention,” Wellfare says. “Other pipe bands take notice.”

Through connections, a partnership grew between Caledonia and the Muskegon’s police band. “They have been really supportive of us with equipment and giving our students extra performing opportunities around the state,” Wellfare says. “Some students were able to [participate] in competitions with that group.”

Wilson says that the support of administrators and family members make Caledonia a successful home for a variety of extracurricular ensembles.

“If the parents aren’t supporting it, it’s lost,” she says. “The kids love it because it’s something different.”

Photo by Christina Tell and Courtesy of Elisabeth Wellfare