While learning viola as a student, Tanner Otto enjoyed both improvisation and figuring out how to play tunes that he heard on the radio. Fast forward several years, and Otto has incorporated both aspects into the 5th- and 6th-grade beginning strings program at Edwin H. Greene Intermediate School, part of Sycamore Community Schools in Cincinnati, Ohio.

Otto also throws in a composing unit and a marching orchestra opportunity during the district Homecoming Parade. 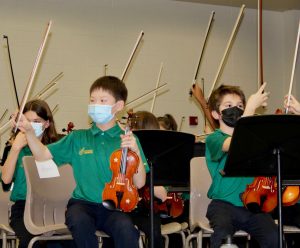 The result of these off-the-beaten-path lesson plans has been more student engagement, higher retention and overall program growth. “By adding in pop and recognizable music and adding technology, students have a positive experience in class and feel confident on their instruments,” Otto says.

Since Otto started his career at Sycamore in the fall of 2019, the retention rate in orchestra — even accounting for the loss of students moving out of the district — between 5th and 6th grade has increased from about 70% to 90%. Similarly, retention between 6th grade and the start of junior high in 7th grade is currently about 85% to 90%. Due to more students continuing with orchestra up the grades, a second orchestra section for 7th grade was added in 2021-2022, and the high school will add a third orchestra during the 2022-2023 school year.

Otto began compiling a pop tunes packet when he was a college senior studying music education at The Ohio State University. At the time, Otto’s teacher wanted the pieces to play with his own 5th-grade class. So, Otto began notating eight-measure snippets of the most identifiable melodies from popular songs.

By his first year at Sycamore, the packet had three pages of content, including a few pop songs, some television and movie themes like “Star Wars” and “Jurassic Park” as well as other recognizable bits like “William Tell Overture.”

Tanner introduces the songs to 5th graders in their second semester and gives out a packet of the songs at the start of 6th grade. Instead of using the pieces just for fun, Otto incorporates the songs into the curriculum by reinforcing skills or fingerings. Otto would even transpose melodies into a different key signature if needed. 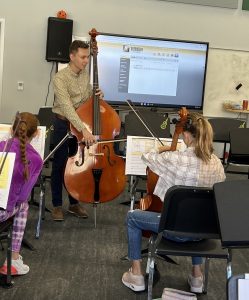 “‘I Love You’ from Barney is in a really easy D major, and we do it early on in 5th grade,” Otto says. “‘Say So’ by Doja Cat has really helped 5th graders with string crossings. It’s better than anything in the method book because it happens faster, and they know how it goes, so they’re willing to play it and learn it and go faster and faster.”

In 6th grade, Otto’s class plays the “Star Wars” theme in C major to reinforce that finger pattern. “‘Happy Birthday’ is great to teach the dotted rhythm, so students can see it on the page even though they know it by ear,” he says. “And ‘Havana’ by Camila Cabello is really good for teaching 8th-note rhythms. ‘The Star-Spangled Banner’ has a thousand things that can be taught from changing finger patterns to varying rhythms.”

When students could no longer attend school in March 2020 due to the COVID-19 pandemic, Otto focused even more on popular tunes. “As long as students were playing their instruments, they were keeping their skills up at home,” Otto says. “I was teaching through video and using these little songs each week,” he says.

Otto asks his students for ideas for additional tunes, so now the full packet is eight or nine pages long and growing each year. “I take suggestions from students in August when we start school, and I will fill the whiteboard with any suggestions that they have,” he says. “Then I’ll go through and narrow the list down to ones that are able to be added or worthwhile. … I try to hand out the packet by the third week of school.”

Typically, pop music cycles through faster, while movie themes tend to stick around longer. “You need to search out what pop songs would work well in a classroom and then see from there if you can fit them into what you’re teaching,” Otto says. “This past year, there have been good pop songs but not a ton of good popular music that would work well in orchestra class.”

In general, for 6th graders, Otto spends about 15% of class time on the tunes packet, 35% using the method book, and 50% focused on concert music.

Occasionally, students might play “Happy Birthday” for other teachers around the building. And at a concert, they might play a snippet of a pop tune to show parents the variety of what they’re learning. 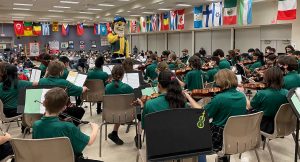 Improvising and composing also help students use their own imaginations to incorporate modern or rock music genres into the coursework. Otto builds up improvisation skills through a simple progression. At first, he asks students to play any rhythm they want on the D string on top of a pre-created backing track or groove. Then, Otto gives them a specific rhythm, and they can use any note. Then students can play any note and rhythm they want.

“In class, I like to do it as a warmup,” Otto says. “It’s a way of targeting the skills we’re working on and disguising it a little bit for the students. Now they’re working on that creative part of playing and figuring out what music they’re writing in their head as they’re playing their instrument.”

Students also work together with a partner and reflect on their playing. “In improv, there’s no wrong note, but certain notes can sound better than others,” Otto says. 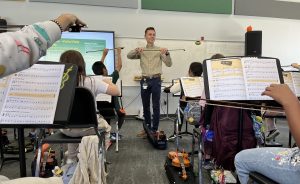 They also incorporate improv into concerts. “Sometimes there’s a solo section in a piece, or we can make one,” Otto says.

For example, the song “Pepperoni Pizza Rock” by Brian Balmages “is a famous beginning strings song that has a solo section in the middle,” Otto says. “I had 10 students do a four-measure improv solo in the concert.”

Doing improv allows diverse students to shine. “Different students take to improv while others take to playing songs out of a packet or playing sheet music,” he says. “It’s really cool to see.”

Otto also adds technology into the mix. Using BandLab online or Soundtrap for Chromebook, he starts by creating a track and then asking students to improvise over it. Students then create their own grooves and play their string instrument on top of it. “It’s improv and technology all at once,” Otto says.

Doing improv is a great lead-in to learning composition. Otto teaches composition using notation software. However, he doesn’t give students full reign. Instead, he guides them to write four-measure pieces that the class could play. Each finished piece gets projected onto a screen, and the class will sight-read through it. Otto might pick a key signature and tell them to use certain types of rhythms. He also asks them to start and end on a certain note.

“Giving them a lot of parameters helps,” he says. “Otherwise, things can get a little too crazy or they are too hard to play.”

Otto focuses on having students edit the work as well. “We pass our Chromebooks around, and students go through and check someone else’s work for errors. Then they have a conference with their friend. So, we do editing before the final submitted product.”

The composition unit is scheduled after a major concert or as part of Otto’s planned days out of the classroom. Before he left as a chaperone for the high school orchestra trip in the spring of 2022, he taught his students about composition and the software, so they could work on their projects when they had a substitute teacher.

Otto says that he would like to see technology incorporated into all 5th through 12th grade instrumental programs but that teachers should be familiar with the programs themselves. “I would play around in the software and figure it out and see what it’s capable of before I would introduce it to students,” Otto says. “Having knowledge of how it works and what’s there will help you when you get in front of your students. If you don’t quite know how the software works, it’s going to be hard to explain to students how to use it or help fix a problem when they run into an issue.”

Though he hasn’t incorporated students’ compositions into concerts, he does send them through email to share with parents.

Overall, thinking beyond the method book and concert music has helped students increase their enjoyment of orchestra. Otto has even presented his insights at the Ohio Music Education Association Conference and The Ohio State University String Teacher Workshop.

“The students look back on having fun and really appreciating their final product,” Otto says. “The technology part, as we head further into the 21st century, should play a bigger role in music education. Students are learning new skills or the same skills in a different way.”