Student initiative is pervasive throughout the Huntington Beach High School’s pop music program, which emphasizes students’ ability to forge their own musical path.

In the spring of 2021, 12 student pop bands at Huntington Beach High School in California faced a dilemma: They wanted to perform as they always have at the spring concert, but COVID restrictions only allowed no more than 50 students to be on stage at once, including performers and tech and media students.

A normal concert would have six bands on stage per night, performing three to four songs each. Program Director Danielle Collins suggested that students film their songs to play on-screen in the auditorium. However, the students wanted to perform live, and they proposed another idea. They would perform for four nights, with a maximum of 23 students on stage per night, which meant that each band would have to learn and perform nearly 20 songs.

Collins recalls telling them, “You’re crazy! You guys learn three songs per show, and now you want to learn 20?”

“They did it … and they killed it! Everybody got way better, and they took more ownership because of it,” she says.

Because the additional work was the students’ idea rather than a teacher-issued assignment, they were motivated to put in the work. Trying to reach a goal, which even their own teacher said was crazy, incentivized students to step outside their comfort zones. “If I would’ve asked them to do that, they probably wouldn’t have taken the responsibility,” Collins says.

This philosophy of student initiative is pervasive throughout the Huntington Beach High pop music program, which emphasizes a teen’s ability to forge their own musical path. “The students have their choice when they come here to find their niche,” Collins says. “If songwriting is their jam, they go in that direction, and we help develop that. If they solely want to be a performer, they go that way. If they want to run rehearsals, we start walking them down that leadership road.”

Pop music is one division in the school’s overarching Music, Media and Entertainment Technology (MMET) program. Collins oversees the program as well as the pop department, which offers real-world professional experiences through concerts, community gigs and more. 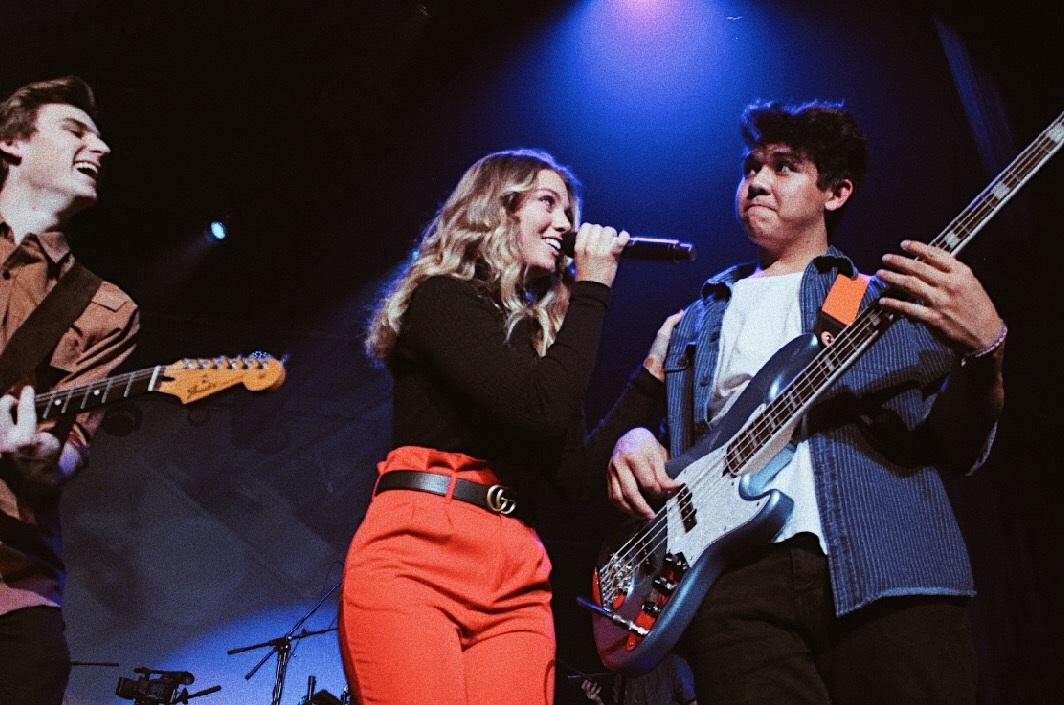 In the MMET pop music program, students join forces to form multiple bands, but the collaboration doesn’t stop there. Because of the amount of collaboration required to put on a pop music show, students get a full education not just in music performance, but also in teamwork.

Students can audition for the pop music program on their choice of voice, guitar, bass, keyboard or drums. However, a lot of pop music, rock ‘n’ roll and other genres require a blend of other instruments, including brass and woodwinds. That’s where collaboration comes in. “We have a full-time instrumental music director on campus,” Collins says. “If I need strings and horns for a show, we work with those guys.”

The MMET department also makes sure that students within each specialty work together. Currently there are about 130 pop music students who work together with the 35 media and tech students to put on, direct and film the three student-run concerts each academic year.

The second concert in February is called Playlist and consists of half original songs and half top-40 pop music. For this show, media students create music videos while pop music students work on original songs. “The students make the set list, vote on it and pick the order,” Collins says.

Because students have so much agency in the MMET department, instructors must be more flexible with their approach to pedagogy. “With a student-led program, there’s going to be a little more chaos,” Collins says. “Because of that, the scaffolding is different. It’s not going to be Bloom’s taxonomy, where students understand, then apply, then analyze and create. Creating happens immediately.”

Collins models this self-starting behavior by keeping an open line of communication with her students and encouraging them to share their ideas. “You have to be open to not having the answer,” she says. “I don’t have all the solutions. A majority of the really cool things I’ve participated in with my program are things my students thought of.”

While the program allows for a lot of creative freedom, a consistent structure keeps students on the right track. Broken down by grade, students see Collins either every Monday and Wednesday or every Tuesday and Thursday, but always at 3:00 p.m. sharp. Each class period begins with a 15-minute meeting to go over logistics, and then students break into rehearsals in separate music studios. Each student group has a 45-minute block scheduled in the studio to rehearse, and rehearsals last until 6:15 p.m.

Bringing a Song to Life 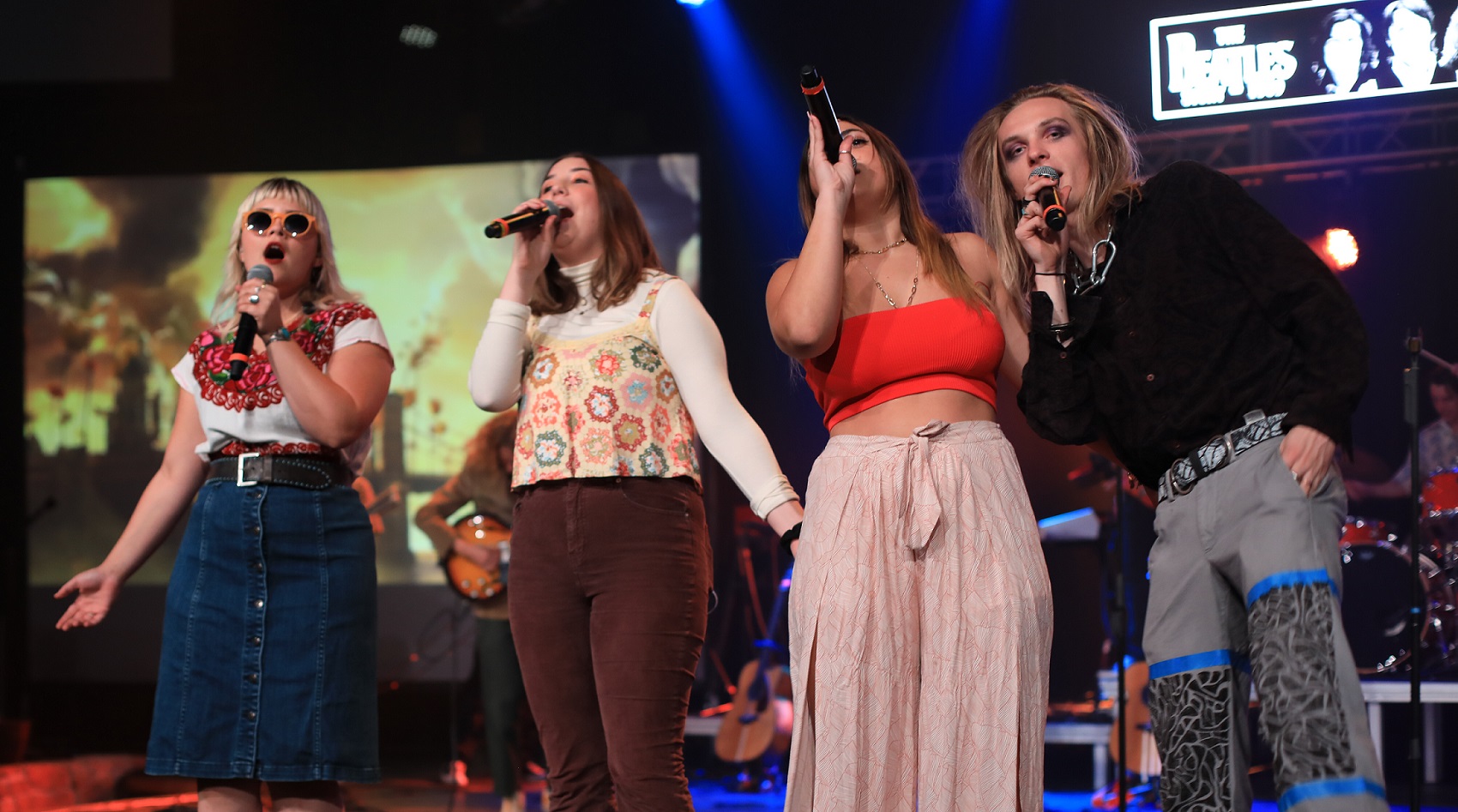 From the moment they receive a new song until the moment they step on stage at a concert, students have about six weeks to learn and perfect their music — for the first three weeks they focus on learning the songs, and the rest of the time is for rehearsing.

Learning a song is all about breaking it down. “They’ll start out on instruments and will chart all the songs,” Collins says.

To make chord and lyric charts, students can research their music at home, work out the notes on their pianos or guitars, or even find chord charts online that they then verify. “We’ll check the lyrics to make sure they’re school-appropriate, and we have the students change anything that isn’t,” Collins says.

Once the song is mapped out, it’s time to break out the technology. Students record their individual parts and then turn in their isolated recordings — called “stems” — to Collins as part of their assignment. Collins, along with the rest of the pop music staff, drops the student recordings into LogicPro to put all the parts together. The staff and students then listen to the consolidated recordings to find any errors.

Students then receive rehearsal tracks for each of their songs, which have a metronome click added to the audio. While practicing, students gradually wean themselves away from the rehearsal track, but if they run into any issues, they can always refer back to the track to get back in the right groove.

Throughout the learning process, students work on setting their own goals, which include due dates for memorizing chords and lyrics. “I have them calendar out when they want their checkpoints, and we build the checkpoints together,” Collins says.

During the rehearsal stage, students use in-ear monitors in place of the metronome tracks. Because many shows start off on a dark stage before a dramatic lighting shift, students practice their songs in the dark to get used to performing without being able to see. Tech rehearsals and dress rehearsals follow as students prepare to become rock stars onstage.

A program based on student initiative requires a strong foundation of trust between teacher and student. Students must feel comfortable enough to try and fail. That’s why Collins emphasizes the importance of failure as a learning tool.

To build that trust with her students, Collins is honest about her own strengths and weaknesses. “I admit what I do and don’t know about teaching pop music,” she says. “I was trained as a classical percussionist and marching drummer. I’ve never been in a pop music band, and my kids know that.”

By acknowledging some of her shortcomings, Collins has helped her students become comfortable with identifying their own places for growth. “We’ve tried really hard to build trust with the kids so they can be honest about failure,” she says.

She recalls a rehearsal with a sophomore vocalist. Collins asked the student how she felt about her performance, and she replied that she wasn’t really happy with it. Collins then asked if she knew what needed to be fixed. When the student confirmed that she knew, Collins simply said, “Take the time, and you’ll be fine.”

By making failure part of a routine conversation rather than a high-stakes evaluation, students can work on identifying their own weaknesses without pressure. “I try not to pass judgment … instead, I help guide them so they feel good about what they’re doing,” Collins says. “If they feel like they’re letting me down, they’re going to fail. They’re much harder on themselves than I could ever be.” 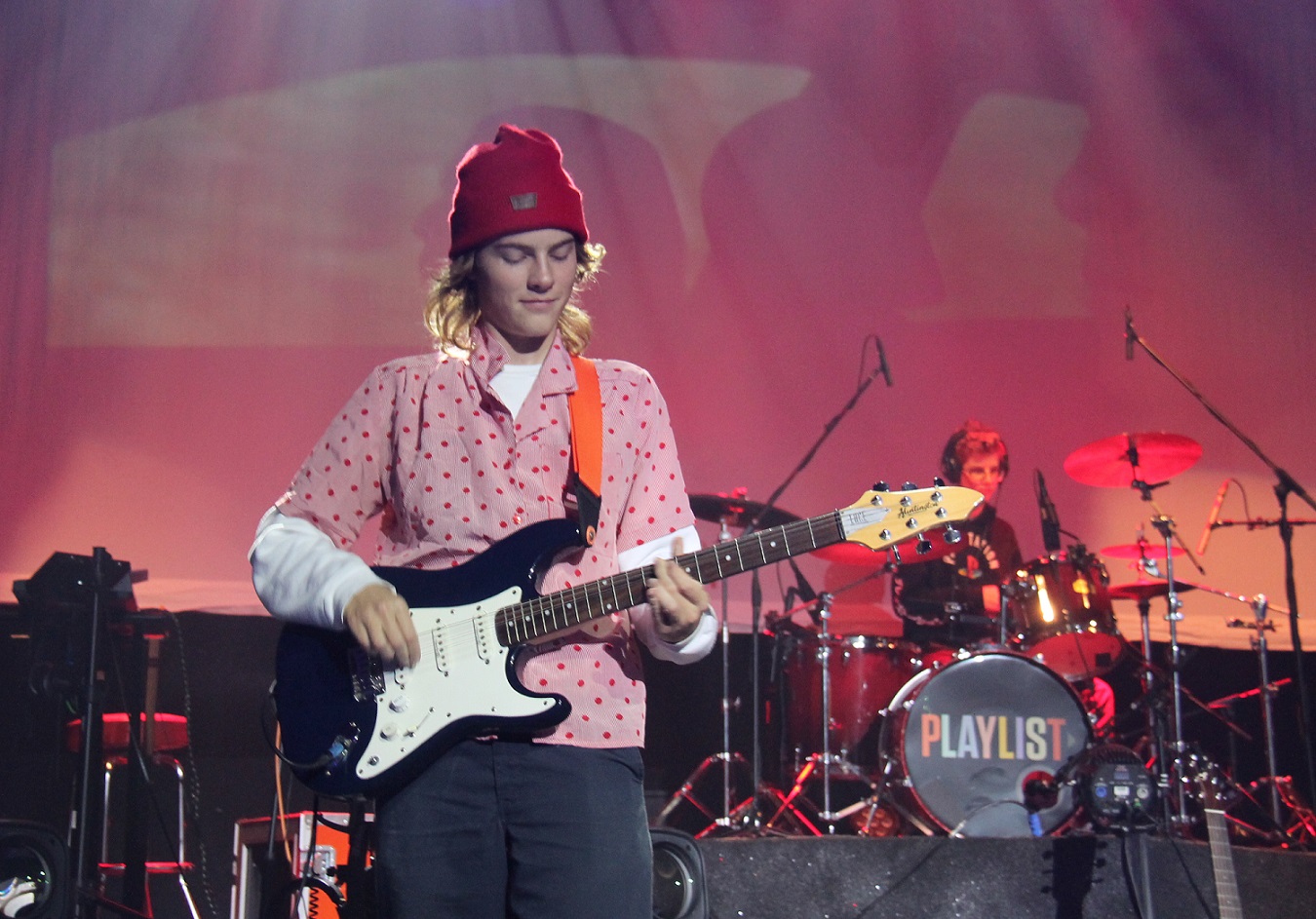 By fostering student self-sufficiency, the MMET pop program helps prepare students for music industry jobs. Whether a student is interested in performance or in the business side of music, MMET has resources to help them reach their post-graduation goals.

Classes are sequenced so that, on average, most upperclassmen have opportunities to perform gigs throughout the community. While freshmen and sophomores take songwriting and recording classes, juniors and seniors take classes like Advanced Professional Music, which teaches about performance, producing and management. Underclassmen record a holiday album every year, while upperclassmen spend the season performing holiday songs around the community.

Students learn multiple facets of putting on a show, not just performance. “I have students who are more interested in the business end, so I have them help me with the admin side of my job,” Collins says. “[Students] learn how to set up and tear down for a gig. They learn audio basics and how to troubleshoot their gear, and they learn advanced microphone techniques.”

Additionally, the MMET program has an offsite performance coordinator, who has arranged for multiple standing gigs for students, including a weekly paying restaurant gig. “The kids are performing, programming the set list, casting it, managing the pay, the gear, the schedule,” Collins says.

For schools that are interested in starting a pop music program, Collins recommends a few resources. She mainly emphasizes the importance of learning tracks, or tracks with the students’ individual parts isolated. For example, the pop music department’s vocal director will often take a new song and sing over the original record at a higher volume to isolate an individual’s part. These learning tracks are then deposited into a Google Drive folder that the entire department has access to.

Even if a school doesn’t have the number of staff that the MMET program has, Collins says creating these resources is still manageable. “Our vocal director did it [when she was] a student,” she says.

She recommends finding some strong students who can build tracks with isolated parts and click tracks. “Give them some learning resources like recordings,” she says. “Preparing the resources for the kids to learn these songs is the biggest steppingstone for other directors trying to do pop music.”