Case Study: The Power of a Transformative Teacher

At a Florida high school, Dr. Tiffany Cox finds ways to provide access to music for young musicians, no matter the challenge.

At Lake Worth Community High School in Florida, Dr. Tiffany Cox finds a way to provide access to music for young musicians, no matter the challenge.

For example, she convinced students to stay in band for their senior year by offering them personalized college counseling. In a similar vein, she created a mentoring program to give middle school students private instrument lessons. In just three years, Cox increased her high school band program from nine students to 95. Lake Worth is a large Title I school, and Cox notes that the majority of the 2,500 students live at poverty levels. Many of their parents did not attend college. Older teens are expected to work to help support their families.

“In a school where the band program has been failing for a long time, and the football program had been through rocky patches as well, … the school spirit has been lacking in general,” Cox says.

Taking over as director of bands in April 2017 after the previous director died, Cox recruited students in the hallways; she played short passages on her trombone during class changeovers. She also asked her drumline members to play. “I literally stopped kids in the hallway and asked, ‘What instrument do you play?’ And 90% of the time, they’ve played an instrument and had quit.”

At band camp, she emphasized fun — with lots of food and even water balloon fights — and encouraged students to share their experiences and photos on social media. “I wanted the entire [student] community to see what we were doing,” Cox says. “We’re building a community.”

During COVID-19, Cox kept students engaged by performing at weekly volleyball games in addition to the two allowed football games. Capped at 30 students per game, she rotated students through performances. She also focused on mental health, creating virtual socials as well as a mindfulness in music program.

To accomplish all of her goals, Cox relies on her own resourcefulness and consistently applies for grants through various programs. Cox received bell covers and face masks for her musicians through the Give a Note Foundation. Through the Education Foundation of Palm Beach County, she received funds to buy yoga mats to do meditation in the band room.

In total, during the past four years, Cox and the band program have received $130,000 in monetary and in-kind donations. These include funds and items through DonorsChoose, the Palm Beach Symphony, the Symphonic Band of the Palm Beaches, Lake Worth High School Alumni Foundation, Nat King Cole Generation Hope, and Give a Note for a timpani, xylophones, marimbas, a whole drumline, concert tubas, electronic keyboards, iPads and microphones.

“It’s a lot of reaching out to people in the community and applying for whatever is available, [whether] we get it or not,” Cox says. “It’s really hard to raise money the traditional way. We struggle selling cookie dough or wrapping paper. … Our communities don’t have disposable income. Instead of bleeding our community dry, we reach outside of the community to look for grant funding.”

When Cox noticed a high staff turnover, poor retention and low skill levels in the middle school band program from her five feeder schools, Cox recruited her students involved with the Tri-M Music Honor Society to mentor the younger kids. Beginning in spring 2018 with five mentors going to one middle school, the program has expanded to involve 35 high school students helping five middle schools. With the high school day ending at 2:45 p.m., the students would go to the middle school band classes occurring during the last bell of the day until 4:00 p.m. Older musicians would be grouped with younger ones as buddies. The high schoolers would give private lessons, do pullout sections, or sit in rehearsals and provide support.

“As a band director, you’re looking at the whole sound, and sometimes it’s hard to get in to see what each person is doing wrong,” Cox says. “[The mentor program] was a good and motivating thing.”

Sometimes high schoolers also help by learning music and sitting among the middle schoolers during their concerts.

Cox herself amended her own schedule over the years to have a planning period in the middle of the day to help the high school students with the mentorship program as well as a planning period at the end of the day to be able to swing by any of the lower schools. “My schedule is purposefully set up for recruiting,” Cox says. “Anytime that a middle school director [asks] if I can help with trombone, I can go over there.” 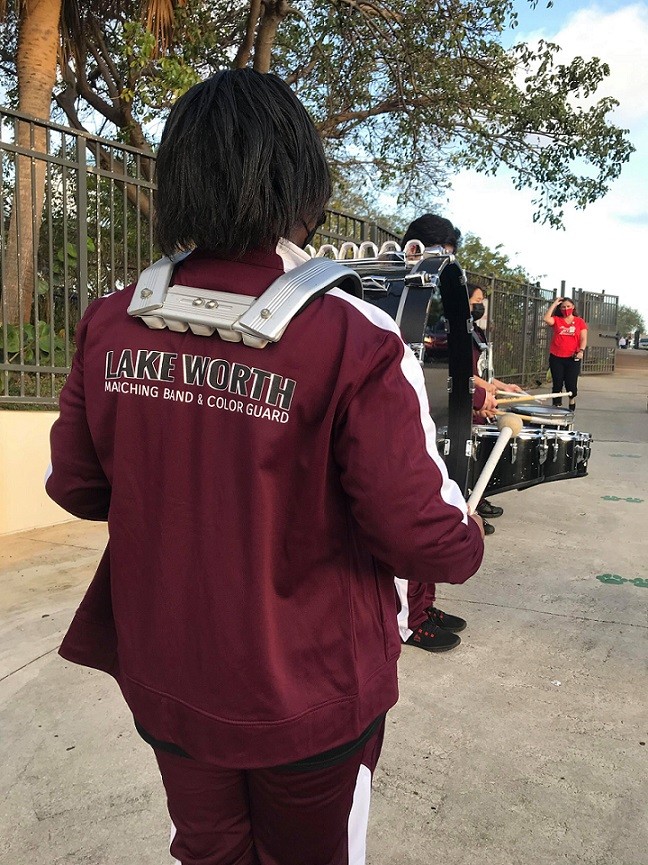 In addition, with her background teaching general elementary music prior to becoming director at Lake Worth, Cox regularly goes to the elementary schools. Because the closest elementary school is within walking distance, Cox brings her high school musicians to perform there several times a year. The drumline plays on the first day of school as buses arrive; a pep band performs during the elementary school’s Halloween parade; and band students also host a standardized testing pep rally.

This past year, the Tri-M Music Honor Society did a youth literacy initiative. For one particular book, the drumline played along to Cox reading “Chicka Chicka Boom Boom,” and the video was sent to the elementary schools and aired during morning announcements. “[The high school band students] coordinated [the program] with the principals,” she says. “They’re incredible kids.”

Since 2017, Cox and the high school choir director have organized a holiday extravaganza winter concert with their high school programs, three middle schools, and three elementary schools. (Lake Worth doesn’t have an orchestra program, but students involved in orchestra can attend another nearby high school in the district.) Each ensemble performs various pieces, and then all students join in a band/choir finale. The city funds a professional recording of the concert. In the 2019-2020 school year, more than 500 kids participated. “It’s an opportunity to learn about each other and support each other and an opportunity to recruit,” Cox says.

Cox helps her high school musicians not only with musical skills but also with life skills. High school students learn and get feedback from Florida Atlantic University students that Cox involves. “We’re working on recruitment and the feeder chain from elementary all the way to collegiate level.” 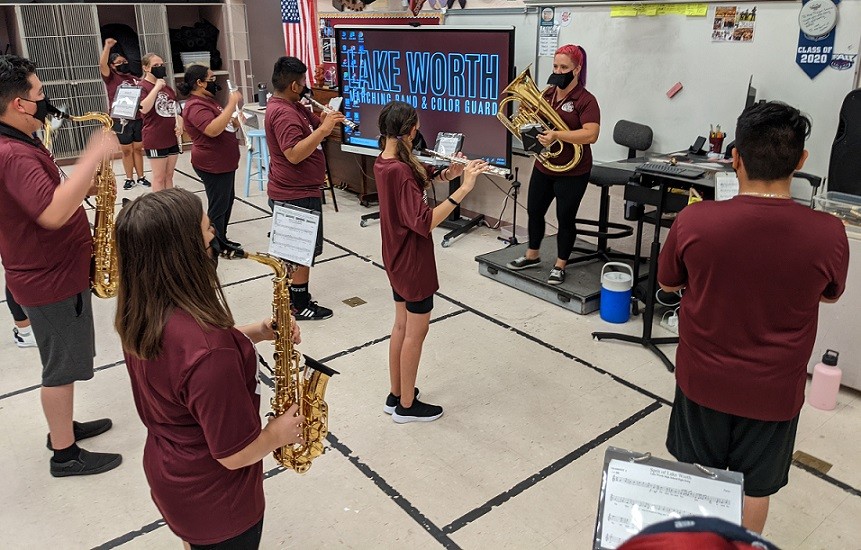 After a few years at Lake Worth, Cox had noticed that students were joining high school band as freshmen, sophomores and juniors, and then quitting. “It was a cultural norm for kids to go to work and support the family,” Cox says. “It’s been a challenge to teach the kids that band is a four-year thing.”

Therefore, starting with the class of 2020, Cox did her own private mentoring with students. She would sit down with seniors to go through their portfolio to plan for college. They worked on resumes, personal statements, financial aid and college scholarship applications. She would also bring in parents to work on college paperwork and discuss financial planning, inviting local bank staff to open up checking and savings accounts. Cox also connected seniors with community members who would adopt them to buy items for their college dorms.

So far, the program seems successful in helping students achieve their goals. A prior drum major received a full scholarship to attend the University of Florida to study wildlife conservation and ecology. While college planning is available through the general counseling staff, the counselors are inundated with work, Cox says, so she decided to provide this extra support on her own.

“My thing is with the kids, whatever your goal is, whatever your dream is, we can make it happen for you,” Cox says. “You just need to put in the time, effort and energy.”

For all of her efforts to transform the lives of her students and the Lake Worth band program, Cox has not only been named a 2021 Yamaha 40 Under 40 music educator, but she has also been recognized as a quarterfinalist for the 2021 GRAMMY Music Educator Award, received the 2020-2021 Spirit Award through the National Life Group LifeChanger of the Year program, and also was one of three winners of the Randolph A. Frank Prize for the Performing Arts through the Palm Beach Symphony, in addition to other recognition.

“A lot of people think that we have it really rough [at Lake Worth] because we’re in a low-income neighborhood,” Cox says. “What they don’t see are the interactions [including a recent potluck celebration] that come together in our band room to make a family. There’s a lot of misinformation about teaching at a Title I school, [but] I love it. There’s nowhere in the world that I’d rather be than where I am right now. [The students] are so inspiring. They work to make me, this program and the school better. … I’m just very fortunate to be where I am.”