In its first few years, the Las Vegas High School Mariachi Program released a CD and performed for many dignitaries including President Joe Biden and Vice President Kamala Harris.

The Las Vegas High School (LVHS) Mariachi Program was founded for a community that embodies what it means to “shine bright” and “be a joya,” which is Spanish for jewel.

As the founding director, I was able to create a five-year implementation plan that allowed for maximum student success. The plan included annual goals as well as action items. Systems were meticulously designed to ensure the school’s first new music program in more than 50 years would impact as many students as it could reach. 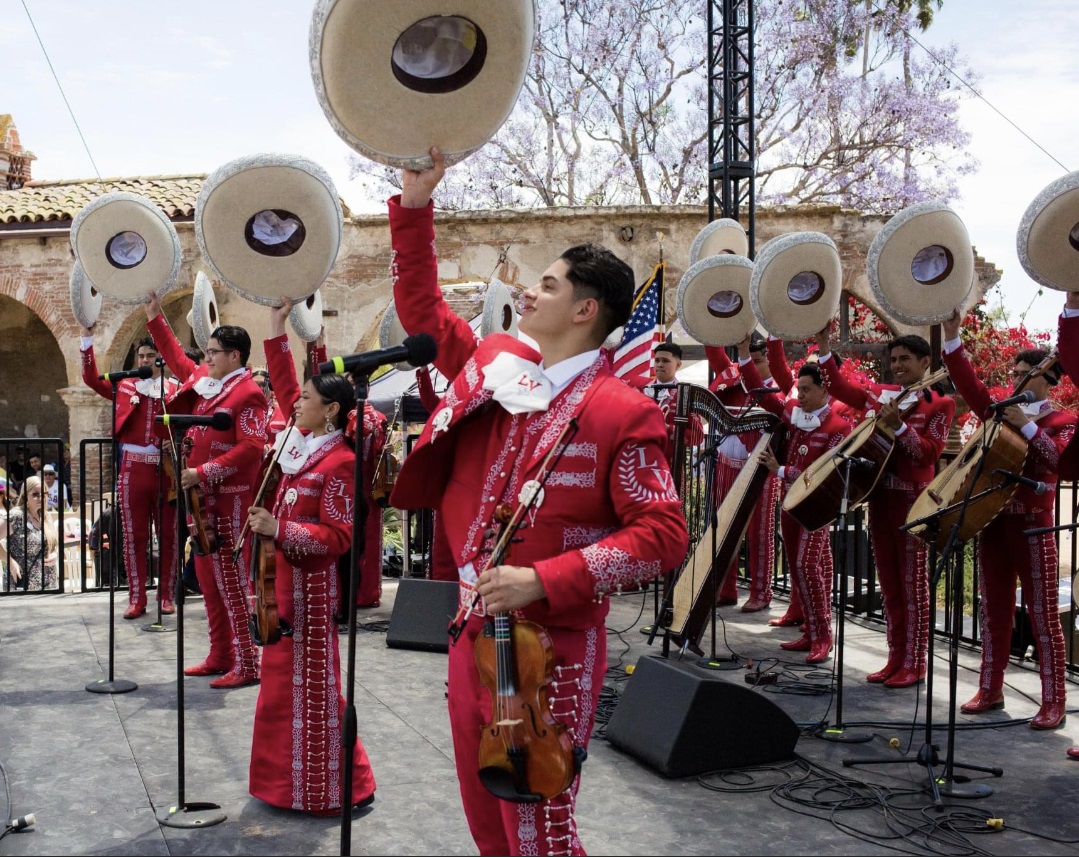 First, we wrote a mission statement and vision that were adopted by staff and students. Every decision made for the group goes back to these philosophies, which helped us during the early stages of creating our massive mariachi program.

Here is our vision: The Las Vegas High School Mariachi Program seeks to be a performance-oriented program that is engaged in both local and national concerts, invitationals, and competitions.

Once we had our mission statement and vision, the work began. Our first task was naming our performing group. Our name comes from our century-old alma mater:

Nestling near the golden foothills, ‘neath the western sky.

Rests the Jewel of the Desert, dear Las Vegas High

Sing her praises ever louder, echoing back and back

“Jewel of the desert” resonated with us, so after input from students, staff and our community, Mariachi Joya was born.

Our first year was mostly about introducing mariachi music to students and giving them performance opportunities, even as beginners. Instruments were ordered an 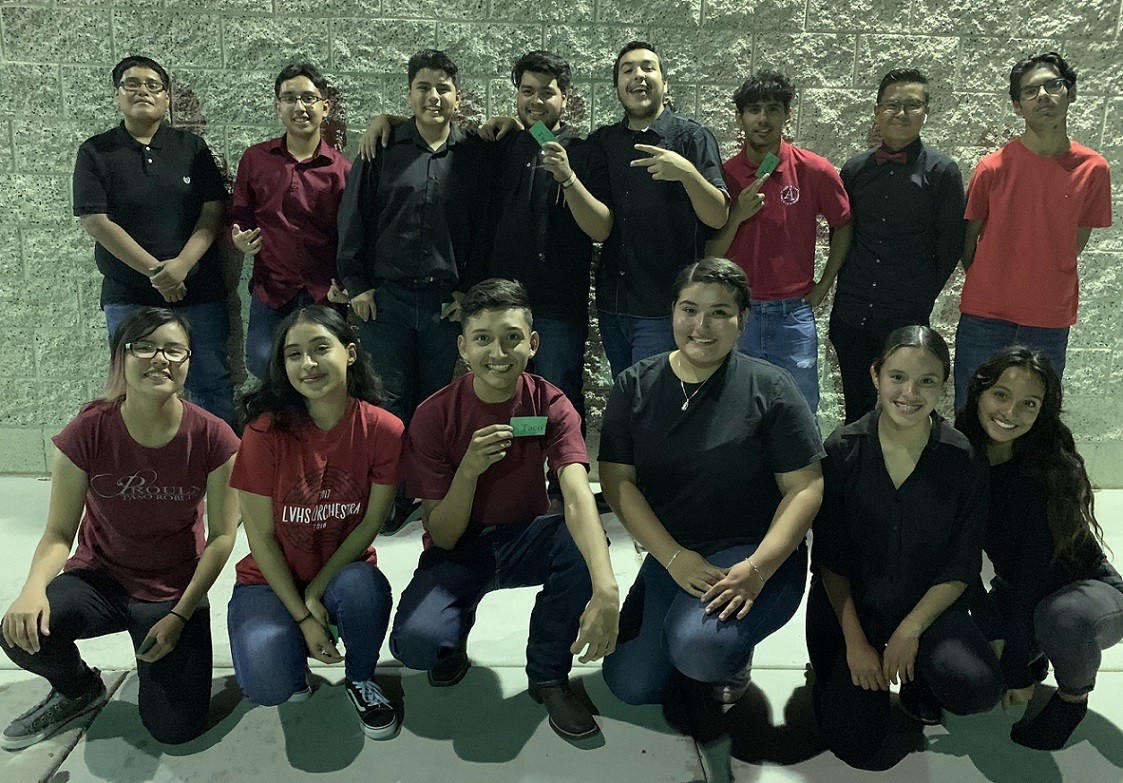 d arrived in October 2018, and our first performance was at a local middle school hosting a big Halloween event. At this time, we didn’t even have T-shirts to serve as uniforms, so we dressed in school spirit wear to go along with the Halloween theme. Beginners performing in their first month learning new instruments was not a popular idea. I had some pushback from a few stakeholders, but I knew it was the right thing to do. Our fledgling program needed to get some excitement and buy-in from students, parents and community members. Although t

here were about 100 students enrolled in the program, we selected the top 25 to perform for the first performance of Mariachi Joya. The performance was a huge success, and the students were so happy with their work.

The rest of the year was

mainly spent on developing the basics on our instruments and preparing for the end-of-the-year concerts. The students were in a fairly good place by second semester, so we decided to attend our District’s Advanced Mariachi Festival for a rating. Mariachi Joya worked so hard in the months leading up to the festival performance and received a rating of “Excellent” from the judges! It was an overwhelming success for us as the district’s newest music program. 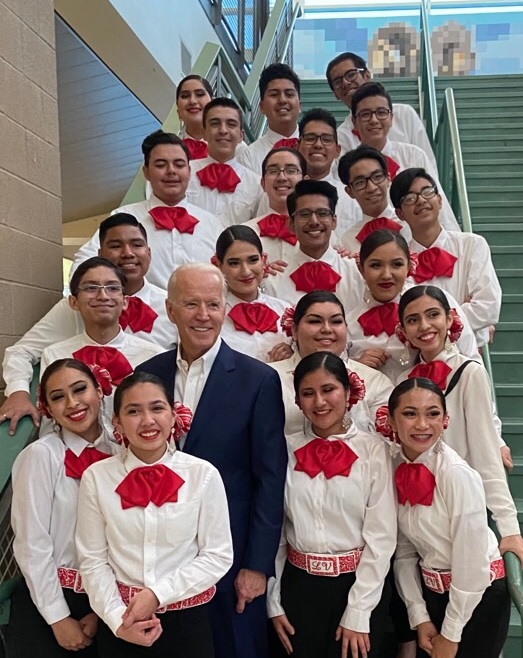 By our second year, we had a true mariachi group formed within the program. Joya became an audition-only ensemble with weekly after-school rehearsals. We had some strategic marketing goals set and wanted to get out into the community as much as possible. An original theme song called “Tema Mariachi Joya” was written for us by Michael Sital, a renowned mariachi arranger from Victoria, Texas.

We started the year off with a bang, premiering this new Tema at the Las Vegas Flamingo Library Mariachi Spectacular. It was an amazing experience to open the show.

Throughout Year Two, we continued to grow and rehearse. We planned to attend a national competition in May, so it was time to really dig into some musical details and aim for excellence. (Of course, this competition was canceled due to the pandemic.)

During our preparation, we were asked to perform for then-candidate Joe Biden at one of his campaign stops in Las Vegas. Even though we were only given a week’s notice, we jumped at this opportunity. President Biden spent a lot of time after the event to speak with the students and really get some insight on what their public education was like. This performance was one of our last ones before COVID-19 shut us down for over a year.

Our plans for Year Three drastically changed because for a full 18 months, we were not able to rehearse or build on our momentum. Students were upset, attendance was at an all-time low and music-making came to a halt. Something had to be done, so we decided to produce a record. Microphones were dropped off at students’ homes and recording began in September 2020. We released our original song, “Tema Mariachi Joya,” the following month in October, and we pushed the record out to everyone who missed playing and hearing music.

News traveled fast, and a few months after the announcement of the record we were asked by the Biden Inaugural Committee to represent Nevada at the 2021 inauguration of Joe Biden and Kamala Harris. We had a mere 10 days to put together this performance for the most historical event of our lifetime. It was a true honor and having met President Biden the prior year made it that much more special. 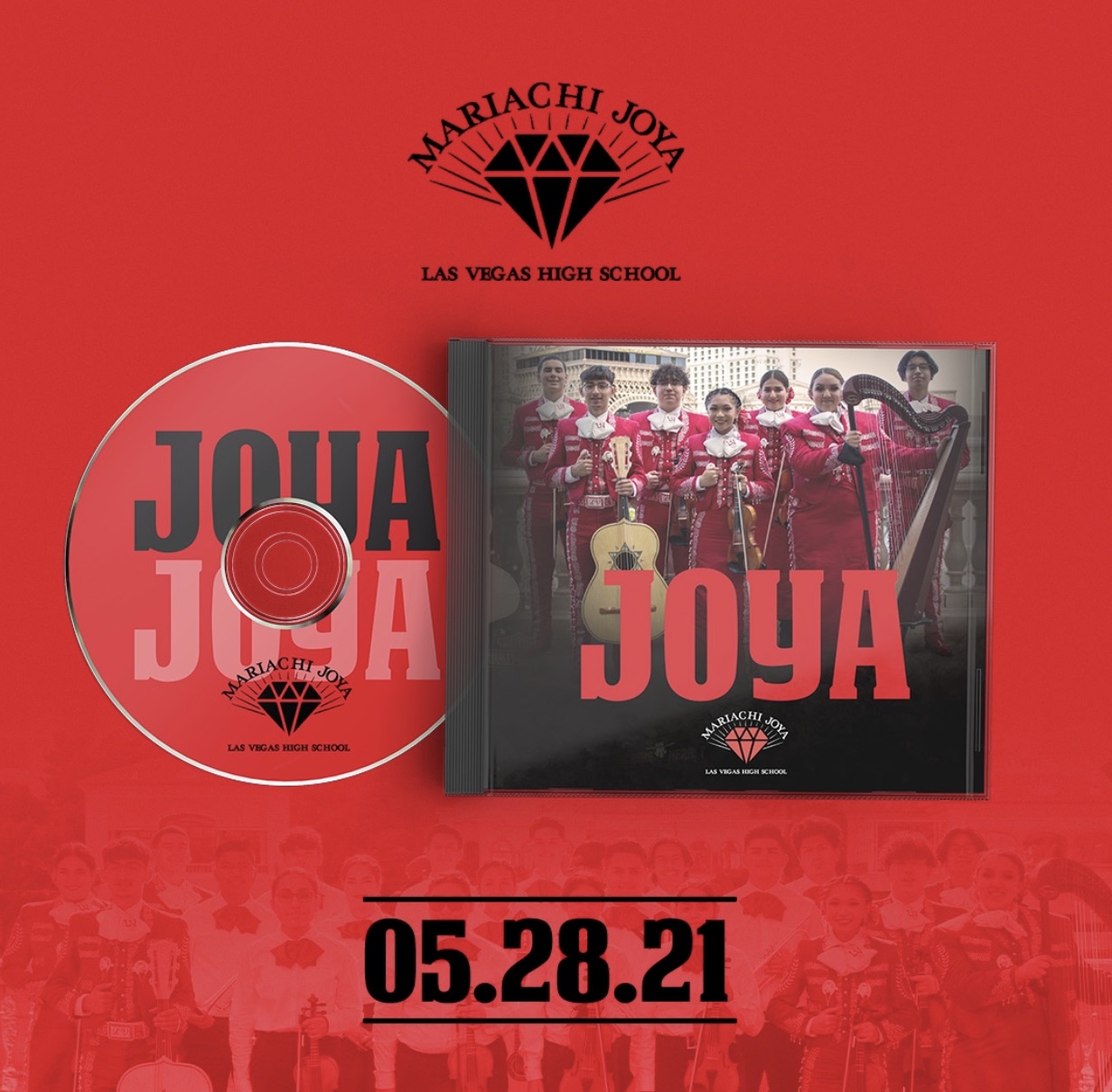 We ended the year with the highly anticipated release of our debut album, “JOYA.” We had a sold-out album release party and consequently released three music videos of our favorite songs. Things continued to look up for our mariachi program, and we started in-person rehearsals again in preparation for something huge.

We announced “JOYA — The Tour,” and our first stop was Las Vegas City Hall and later that week we performed for Vice President Harris at the White House’s “America’s Back Together” tour. Joya began performing at some of our nation’s most iconic venues, including San Antonio’s City Hall, The Mexican Cultural Institute in Washington, D.C., Las Vegas’s esteemed Smith Center for the Performing Arts, and Placita Olvera (the birthplace of Los Angeles). Mariachi Joya joined many other professional mariachi groups on their national tours and performed with or opened for ELLAS, Mariachi Sol de Mexico, Mariachi Nuevo Tecalitlan, Aida Cuevas, Mariachi Divas, Mariachi Los Camperos and Mariachi Vargas de Tecalitlan.

Through this tour Mariachi Joya was recognized by The Recording Academy, The GRAMMY® Museum and Billboard Magazine. We also received a certificate of Gubernatorial Recognition by Nevada Governor Steve Sisolak and made international news as far as Guatemala. A culmination of all of our hard work was when we were named “The Nation’s Premier Mariachi Ensemble” by SBO Magazine.

Growth of Mariachi in Las Vegas

Through its first few years, the LVHS Mariachi Program has made a great impact on its students and the local community. The program’s graduation rate is 100%, and mariachi students have regular grade checks to ensure academic success. The program grew to over 240 students who are also involved in the other performing arts at LVHS like band, choir, orchestra, dance and theater.

As the high school mariachi director, I helped establish feeder programs at both of our neighboring middle schools. There are more than 600 combined middle school students taking mariachi at those schools now. 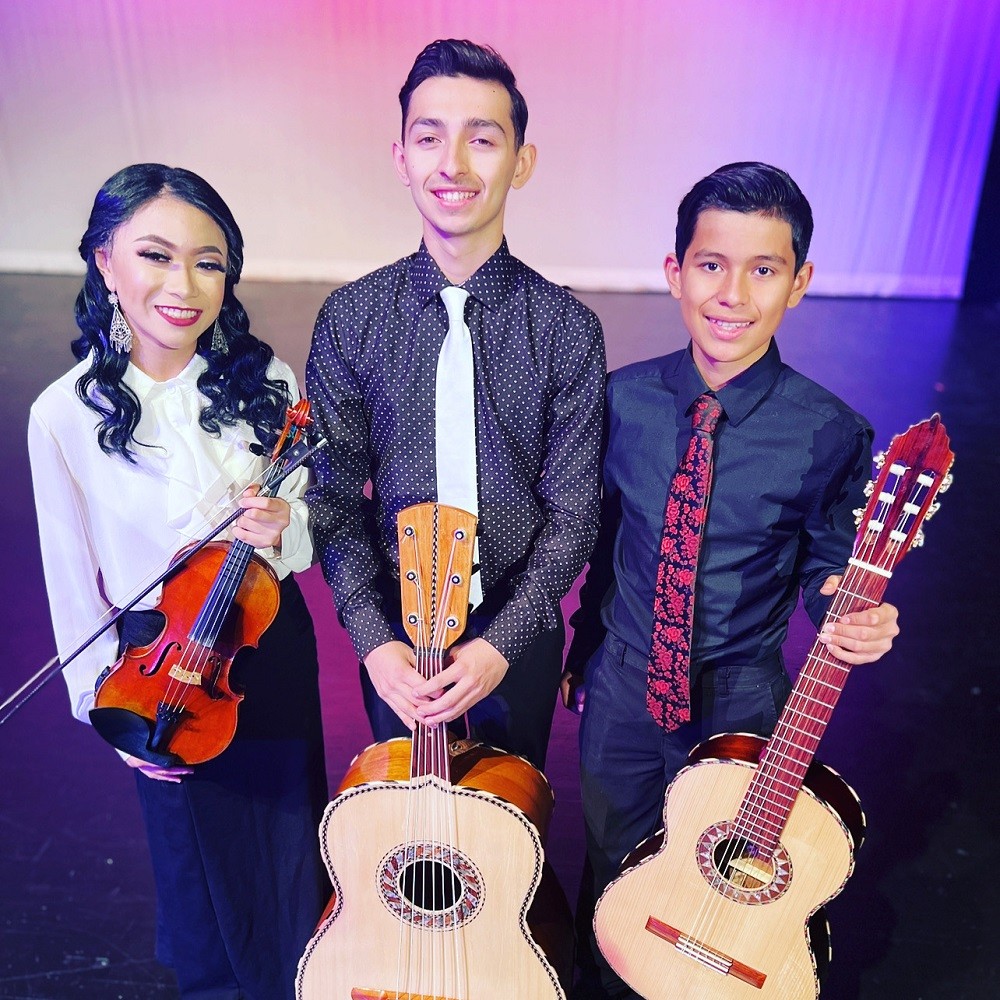 Although most of the students won’t become full-time mariachis after graduation, we also have a 100% career and college placement rate for the 2022 graduating class. With a few students taking over family businesses, the rest went off to colleges and vocational schools. It is my hope that they take with them the lessons they learned through our shared experience with Mariachi Joya.

LVHS now has six auditioned mariachi groups: Grupo Vegas focuses on other kinds of trio Latin music, Mariachi Joya and Mariachi Cristal are audition-only competition groups that perform across the state and country, Mariachi Brillante and Mariachi Resplandor are larger performing ensembles that perform at multiple LVHS concerts, and Trio Vegas is made up of the top three mariachi students in the program.

Mariachi students continue to bring pride and excitement to our school that bears our city’s name. We used to say “be a joya” as a sign off, but now with so many amazing groups, we say “shine bright.”