Requiring all 6th-grade students to try band for a few weeks increased enrollment and created a positive ripple effect for future retention.

Before Director of Bands Douglas Schaffer, a 2021 Yamaha 40 Under 40 music educator,  joined the district in 2019, only 24% of 6th graders signed up for band at Ralls County Elementary. Though they were required to participate in fine arts, many students favored art or general music. (Choir becomes an option in 7th grade, and the district does not have orchestra ensembles.)

After a mandatory exploratory fine arts program was launched at the start of 6th grade, band enrollment rose to more than 60% and almost 80% of those students remained in band when they transitioned to Mark Twain Junior High. Schaffer sent home this letter to parents to explain the exploratory course.

“Elementary art translates into middle school art, but elementary music does not necessarily translate to playing an instrument,” Schaffer says. “When most kids are coming into 6th grade, and they’re looking at picking their elective, they have this big mental block about band. … One of the things I heard [from students was], ‘I don’t know how to play an instrument.’ … [Because of] those preconceived notions, I wasn’t getting them in the door. I had to show them that they can actually have success on an instrument.”

With an average of 60 students in each grade at Mark Twain Junior High, the 6th grade students separate into four groups and rotate between band, art, general music and gym during the third hour of each school day. After 2½ weeks, students decide which fine arts class to keep.

“I demonstrate the instruments [flute, clarinet, trumpet, trombone and percussion] for them and get the mouthpiece in their hands,” Schaffer says. “I’m able to get them to test and try out those instruments. … It’s actually showing the kids that they can make a sound on the instrument.”

At the start of 2019, Schaffer rotated and sprayed down four or five mouthpieces per instrument for each class. With COVID-19 safety guidelines in the fall of 2020, the school used CARES Act funding to purchase 20 Wind Instrument Try-Out Kits that include a simulated flute headjoint, woodwind mouthpiece with synthetic reed, and brass mouthpiece with two cup sizes. Made of plastic and rubber, the fake mouthpieces and reeds could be washed in the dishwasher each day.

“That made people a lot more comfortable than sanitizer spray,” Schaffer says. “These will have some longevity. We’ll be able to keep them for years to come and use them often.”

Students’ ability to try the instruments before they commit accounts for 90% of the exploratory program’s success, Schaffer believes. The other 10% happens through relationship building. “They need to be convinced that they want to commit the next year … and potentially the next seven years [with me],” he says.

This chart shows the growth in 6th grade band students.

Schaffer believes that the exploratory program could be implemented at any school, increasing or decreasing its duration depending on the number of total students in the grade.

Though an instrument fair could accomplish similar goals — and the district will be hosting one this spring — Schaffer says that some students would slip through the cracks. With an instrument petting zoo or fair, “you only get the [kids] who want to go,” he says. “You don’t catch every student. The advantage of the exploratory class is that I get to put a horn in the face of every 6th grader in the school district.” 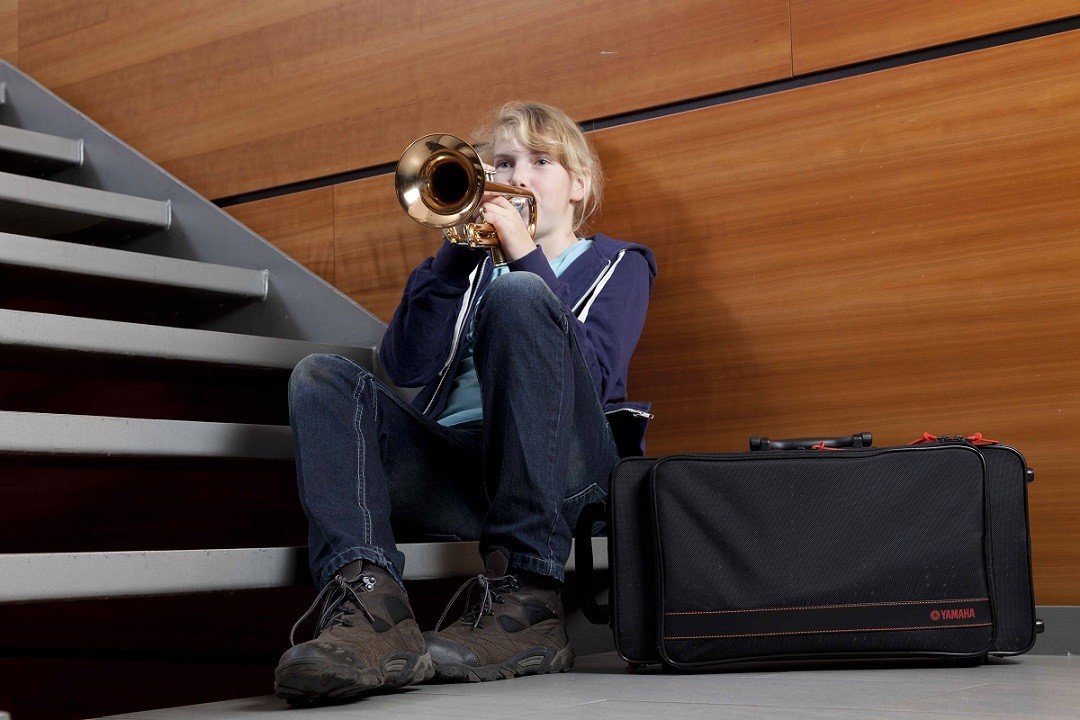 Schaffer and the art teacher now start the recruiting process by visiting 5th grade classes together. “[The art teacher] takes a couple examples of artwork, and I do a quick breakdown on [the process of band].”

In addition to showing 5th grade students the instruments, Schaffer makes sure to play a fun song from Disney or Pixar. Schaffer will also take some musicians from the high school band for a concert.

“I’m going to have three or four points of contact with these kids before I even try recruiting them with the exploratory class,” he says. “I have 18 little brothers or sisters in this 5th grade class right now. … That’s one of the awesome things about building a program in a small school [district]. Eventually it does become a self-fueling machine where kids just want to do it.”

Though more students are now choosing band instead of art, the exploratory program has benefited both groups. “The art teacher and I understand that it’s a symbiotic relationship,” Schaffer says. “If he has an art class of 40 or 50 kids, he’s doing a whole lot of generalized stuff. If he has a smaller class, he can build better artists and keep them in his program for a longer period of time. Our art program is rocking.”

As for his own bursting classroom, Schaffer welcomes the larger class sizes. “Band teachers are a different breed,” he says. “For me, it’s never an issue having more kids in the room. … We just stay busy every second of every day. I don’t give them a chance to make bad decisions.” 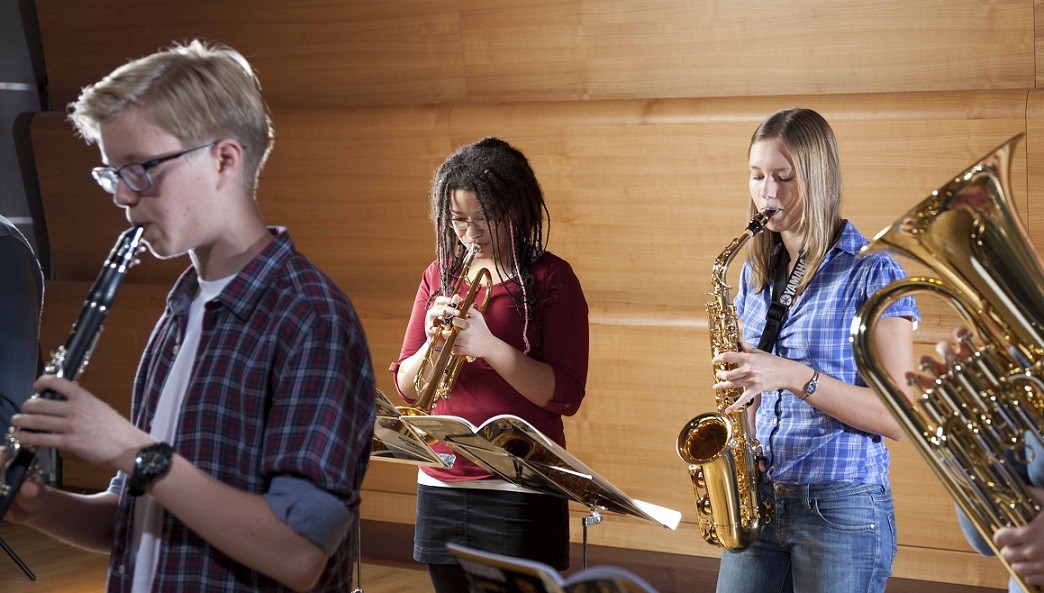 In his first couple of years at his previous position at Laquey (Missouri) School District, he noticed that he didn’t retain anyone between 8th and 9th grade. After speaking to a student, Schaffer realized that the high school commitment felt overwhelming in comparison to the junior high schedule.

“It clicked,” he says. “We were trying to go from two concerts and maybe one concert festival in middle school to five football games, four marching competitions, two or three concert festivals, [and possibly] jazz band in the high school. Well, that is a really big jump.”

At Laquey and then at Mark Twain, Schaffer started a junior high parade band. Mark Twain 7th and 8th graders participate in three marching events — two of which are combined with high school activities.

In 2020 when most band competitions were being canceled, Schaffer even created his own local festival, the Mark Twain Invitational, featuring parade, field, indoor guard and indoor percussion categories. Both Mark Twain’s junior high and senior high participated. “It was a great day for us last year, pandemic and thunderstorm notwithstanding,” Schaffer says.

As a result of these various initiatives, Schaffer has an impressive retention rate — about 75% to 80% between 6th and 7th grade, 92% to 97% between 7th and 8th grade, and 100% for high school. While at Laquey, Schaffer had increased total band enrollment from 30 to 135 in 6th through 12th grade within four years.

Getting buy-in for program expansion or funding has never felt difficult for Schaffer. “What did [I] do to convince admin to do this? I just asked,” he says. “I didn’t have anything written up. I didn’t have any proof.”

“I’ve been lucky to have admins who want to grow the program, who want to see children have opportunities,” Schaffer says. “They want to see students succeed. They’ve been very open to stuff that [might] look unorthodox in other years [or in other places].”

Schaffer, who mentors young directors, says that instructors need to get more comfortable seeking out support. Administrators will typically not approach teachers to find out what they need, he adds. “You are your program’s biggest advocate,” he says. “You need to go to the office to ask. [Don’t be] afraid to go to your admin with unconventional ideas. [They] are going to be approachable because they understand that they hired you to be the expert in your room.”