When Vincent Vicchiariello began his transition to Director of Bands at Nutley High School in New Jersey in 2018, the program boomed. “We had our biggest [group] of 95 students in our marching band,” he says. “We were busting at the seams.”

As the band department increased in size, so did logistical challenges including where to store equipment and when and where to rehearse. Clear communication and support from the community led to interesting solutions.

Vicchiariello compares band directors to mathematicians or firefighters. “Every band director is the same — we’re problem-solvers,” says Vicchiariello, who has been a teacher with the school district for more than 11 years since earning his music education degree in 2009. “We’re always finding a way to make something happen.”

Part of the band’s growth occurred with the formation of an indoor percussion ensemble in 2016. The group had its first competitive season in the winter of 2017 and now has about 30 participants. Starting then and in the years since, the band has steadily acquired pit equipment, including three marimbas, four vibraphones, a drum set cart, a synth cart, speakers — “all that good stuff,” Vicchiariello says.

Much of the front ensemble opportunities have been incorporated into both the winter and fall marching groups. “We consider ourselves to be a decent-sized program, but our percussion section was [previously] just … battery on the field [and] a small front ensemble,” Vicchiariello recalls. “We’ve really grown our front ensemble to be something that is comparable to what is behind it on the field.”

While accumulating the equipment, Nutley experienced storage constraints. “Percussion instruments take up a lot of room,” says Vicchiariello, who is a percussionist himself and graduated from Nutley in 2005. “One thing that I still battle on a daily basis is facilities storage,” he says. “Where do we put everything?”

Just 15 miles outside of New York City, Nutley High School sits in the center of town with no room for development. “The problem here is that there’s no space to build anything else,” Vicchiariello says. “We can’t toss on an addition to the high school to expand the music wing because there’s no land to build on — everything is so tight.”

Having just a small closet shared with the theater department and the rehearsal room itself, the band began by putting large equipment on the stage. But when the auditorium was used for theater performances, that solution wouldn’t be viable. 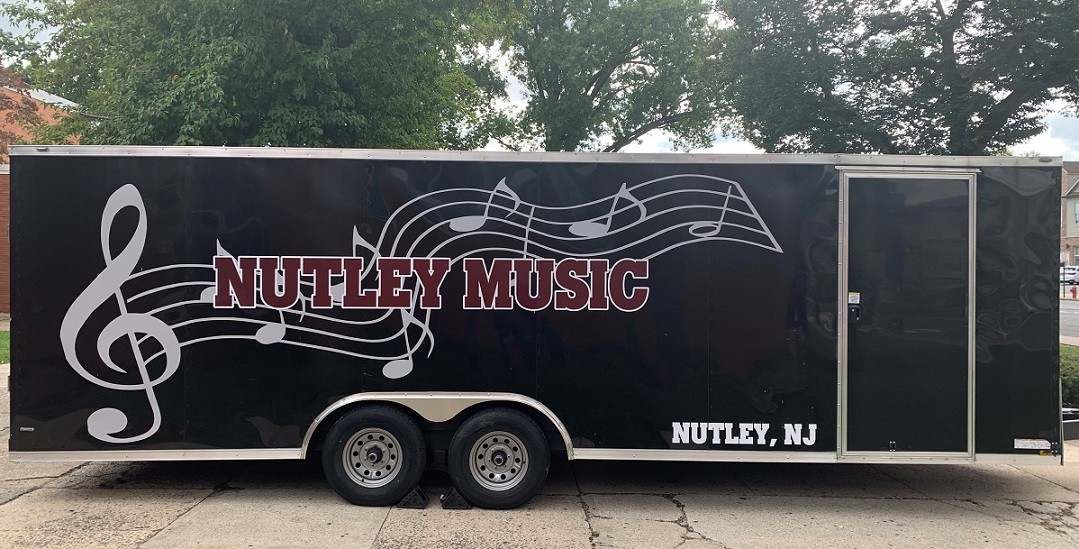 Vicchiariello and the school district solved its storage problems in a variety of ways. Most importantly, the board of education purchased an enclosed trailer exclusively for the band’s use in March 2018. Previously, the district had transported the band’s equipment to competitions, games, and other events in several multi-use box trucks. As the board looked at buying a new box truck, it incorporated the purchase of the trailer. Vicchiariello coordinated with the director of grounds to research the size and internal features as well as bid out the project. A student’s uncle paid for the custom exterior paint.

In addition to travel, the trailer is used as a storage facility for marimbas, vibraphones, xylophones, any stands or racks, as well as other items that are made of metal or plastic. “Whatever is going in there doesn’t need to be temperature controlled,” Vicchiariello says. “We are constantly in and out of there, and we do check up on it if there are any leaks or if anything gets too hot. Nothing is in there with wood or drumheads.” 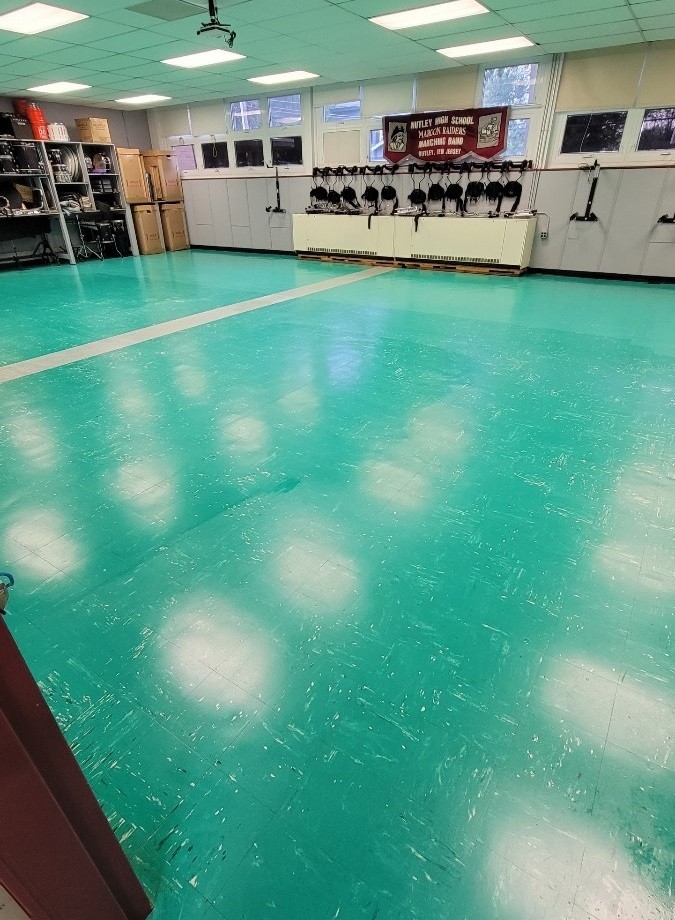 In addition, Vicchiariello built shelves and a rack in the back of the band room to house battery equipment and harnesses, respectively. Unfortunately or fortunately, the band received new marching band uniforms in 2018 as well, so the shelves now hold boxes of extra uniforms instead. “It’s like the ever-turning carousel that doesn’t want to stop,” Vicchiariello says.

As a temporary solution, the band is taking advantage of an unused general music and computer classroom to house battery equipment, low-brass instruments and uniform racks. In the future, the band and choir hope to jointly create a uniform storage system in the choir office.

Vicchiariello also organizes the storage closet to donate, sell, repurpose or pass along old equipment. “I did a lot of work with clearing out most of the old and sorting through things and making piles to see how we can use the space to the best of our ability,” he says. “Everyone who knows me says that I’m a great organizer whether it’s an Excel sheet or the way that I keep my area.”

Most of the time at Nutley, when teachers decommission an item, the school system decides what to do with it. Large instruments like a bass drum or marimba were handed down to the middle school, for example.

As a self-proclaimed “neat freak,” Vicchiariello will clean out his storage spaces on a rolling basis, “If I have time, I’ll go and do it,” he says. “I did it in the fall. I find myself doing a lot of it during the summer. When I’m here for a marching band rehearsal, I’ll come in early.”

In addition to being an organizer himself, he teaches his students to be the same way. “It’s become part of the culture,” Vicchiariello says. “It’s like raising our own kids. … We don’t just take a cover off an instrument and roll it into a ball. We fold it and hang it over the instrument. When you take your instrument out of your locker, you don’t leave the case on the floor. The case goes back into your locker. We’re constantly brainstorming ideas on how to make the small things we have [feel] bigger and how to maximize the space.”

In and Out of “The Swamp” 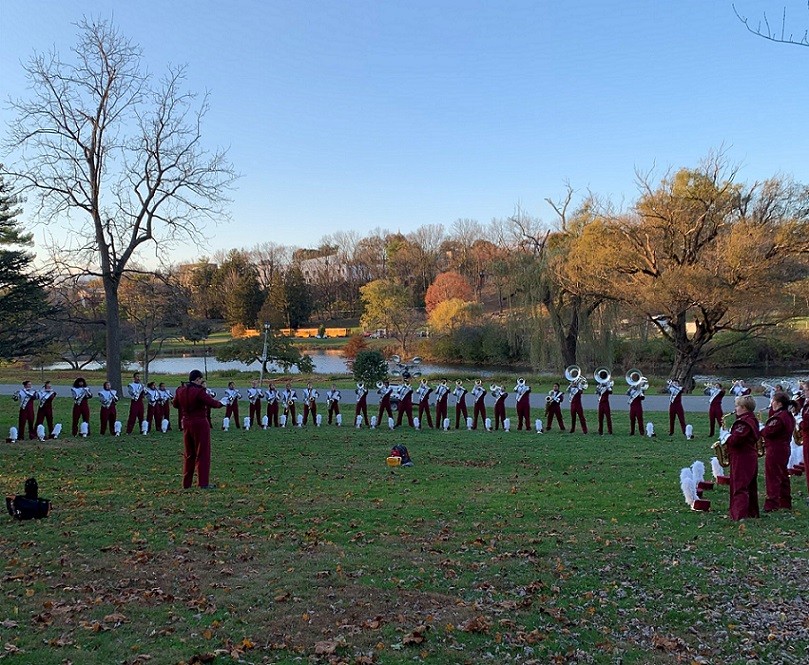 In the same vein, Vicchiariello solved challenges that the marching band faced with rehearsal space. With only one multipurpose field used for football, baseball, soccer, lacrosse and marching band at the high school, the band’s rehearsal schedules conflicted with sports practices and games. Therefore, the band members often walked to Yanticaw Park, directly behind the school and affectionately called “The Swamp,” when they couldn’t use the main field. During the last competitive season in 2019, the space didn’t have enough room for 95 students or even an area for the front ensemble. “We would have to do split practices and were only able to practice certain parts of our show,” Vicchiariello says.

To be able to rehearse the full show, the band changed its twice-a-week practices to the evenings after football practices and soccer games. Since the stadium has no lights, the band would use a portable generator to see, Vicchiariello says.

As if the prior facility conflicts weren’t enough, the school returfed its field in the summer of 2020, restricting its use, and groups couldn’t use indoor bathrooms due to COVID-19. So, the band held a modified band camp at Owens Park on the other side of town. “Owens field had a full bathroom and a very big open space,” Vicchiariello says.

In the end, Vicchiariello credits the community for coming together. “Every road or every connection leads back to Nutley,” as he has certainly experienced. “We have a community, an administration and teachers who support what we do. And our parents are the best in the business.”