Case Study: The Depth and Breadth of Music-Making at Orange Grove Elementary

After almost 20 years of no music classes, Orange Grove Elementary is coming back strong with a thriving program.

Performing everything from Tchaikovsky to Christina Perri, students at Orange Grove Elementary School in Anaheim, California, have a variety of opportunities to stretch their musical skills.

They use a diverse set of instruments, starting with vocals and then progressing to hand drums, ukulele and even melodicas before hitting an extensive rotation of traditional band parts. In addition to school concerts, various grades have made high-profile public appearances, ranging from the National Association of Music Merchants (NAMM) Show to the city’s Dias De La Muertos (Day of the Dead) festival.

With the expectation of teaching the same students for seven or eight years from transitional kindergarten (pre-K) to 6th grade, EJ Villanueva knows that he must provide unique experiences that go beyond traditional elementary music.

“Because I have the ability to teach every single student every single year throughout their entire journey, I use that as an opportunity to explore different facets of music,” Villanueva says. “That can range from learning how to sing, dance and respond to music, … [to] learning how to compose, beatbox, rap, play in a rock or pop band, … everything. I’m ultimately a believer in creating lifelong music lovers and appreciators.”

The depth and breadth of Orange Grove’s music program seems even more phenomenal since Villanueva only started teaching there in 2018, the school has a 92% low-income population and the entire Anaheim Elementary School District had been silent — with no music classes — for approximately 20 years, shortly before Villanueva’s arrival.

“The music program in our district is very young,” Villanueva says. “Before that, the Anaheim Elementary School District was ‘music dry.’ Right now, we’re on the other side of the pendulum.”

For his efforts to strengthen Orange Grove’s music program, Villanueva has been named as a quarterfinalist for the 2022 Music Educator Award, presented by the Recording Academy and GRAMMY Museum. 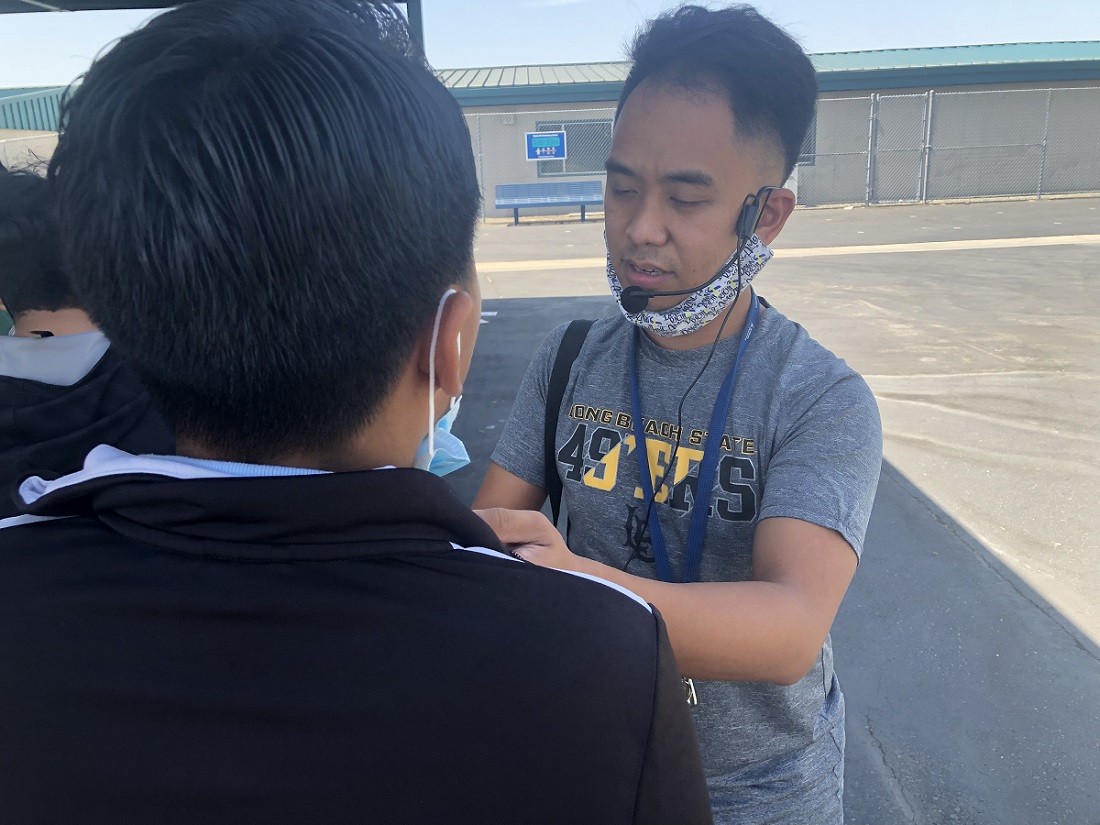 Villanueva, who graduated with dual bachelor’s degrees in music education and jazz studies from California State University, Long Beach in 2016, and a master’s degree in arts and cultural management from the University of Denver in 2021, began his teaching career working with 4th through 6th graders in the after-school music program at Franklin Elementary School in the same school district.

At the time, many of the 24 Anaheim elementary schools had after-school music, originally through a partnership with the Pacific Symphony, and slightly more than half taught music during the school day. Music had only started to trickle back into the district in 2014. “[In 2018], there was a big hiring frenzy … and the beginnings of the full-on music program that was imagined [for the district],” Villanueva says.

In order to grow the program, the school district as a whole has received various grants and donations from the NAMM Foundation, The Disneyland Resort, Save The Music Foundation, Little Kids Rock and Yamaha Corporation of America. According to Villanueva, these partnerships were in large part due to the efforts of the Anaheim Creativity Council, which was formed in 2015.

While Villanueva wasn’t the first music teacher during the revival at Orange Grove, he took the program to another level by providing hands-on engagement. “It’s all about participation [and] engagement. … If the kids are not enjoying it, then they are not going to be as open to the learning process. You’ve got to reel them in and drop little nuggets of knowledge here and there,” he says. Villanueva teaches all 600 students at Orange Grove. Each grade is divided into several classes that meet for 30 minutes per week for TK and 1st grade, 45 minutes for 2nd through 4th grades, and 90 minutes for 5th and 6th grades. During the 2020-2021 academic year when the entire school was virtual until April, he met with 6th graders twice per week.

The youngest students start by singing, dancing and doing hand percussion. They learn fundamentals such as rhythm and solfege, as well as polar opposites like fast and slow, soft and loud. In 1st and 2nd grades, Villanueva introduces ukulele, piano, drum set and melodica. At first, Villanueva teaches through audiation using call-and-response methods. He prioritizes students playing instruments through guided notes and labels before integrating skills in reading music as they grow and develop. In 3rd grade, students learn recorder, and in 4th grade, he focuses on modern band and some guitar. 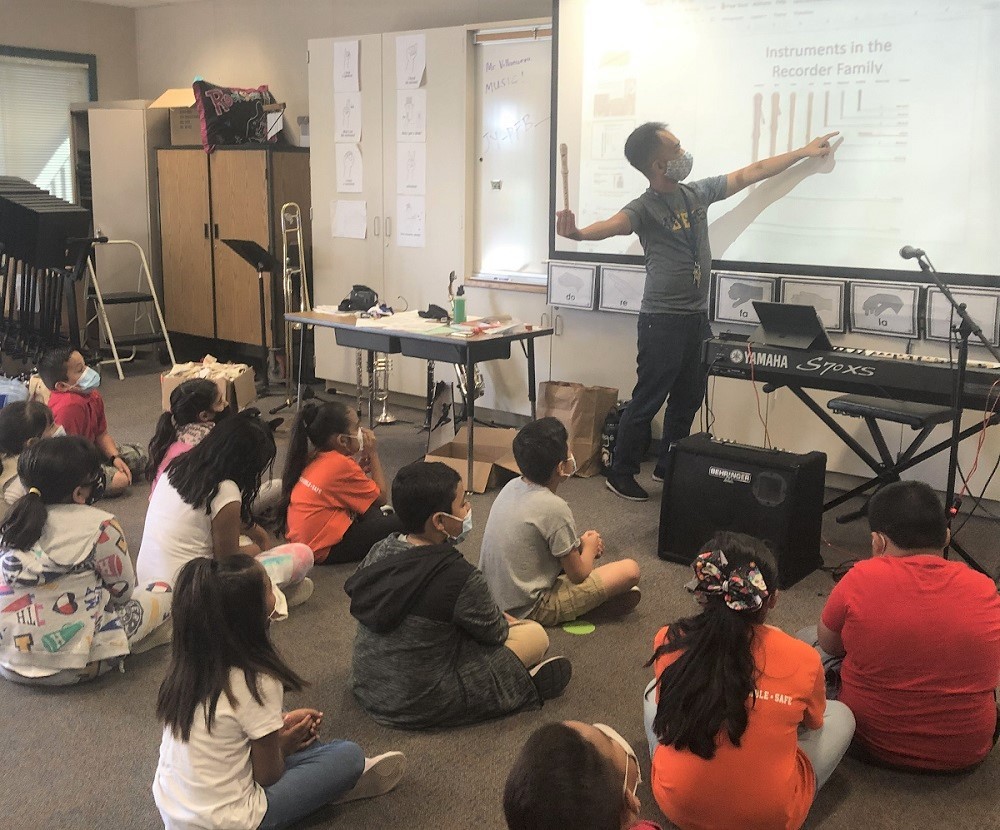 Villanueva specifically wanted melodicas, a combination wind instrument and keyboard, for younger grades. “I got the idea of incorporating melodicas after seeing some videos of children in Japan,” he says. “Plus, it’s louder than electronic keyboards, so for performance purposes, it’s great to project. It’s also a good segue into 5th grade and 6th grade when students have to learn to use their air. Not only are they developing keyboard skills, but they’re also learning breathing skills.”

Villanueva received funding for melodicas and keyboards through DonorsChoose, Anaheim Elementary Education Association and Little Kids Rock. After seeing his success, teachers at two other schools in the district also have melodicas through other donations.

“The teachers [in the district] have a lot of independence,” Villanueva says. “But we do have the universal agreement that music should be accessible to everyone.”

As part of the music progression, students in 5th grade engage in the exploratory wheel and  learn voice/tech, violin, ukulele, guitar, bucket drums and piano in six-week increments. These courses were chosen for the 2021-2022 school year because they are COVID safe. Prior to the pandemic, students learned traditional band instruments. The district rotates the instruments through the various schools.

By 6th grade, students are split into three bands of about 27 each, depending on their classroom assignments, and everyone focuses on a primary instrument. While the school doesn’t have orchestra or choir, Villanueva does incorporate singing in the ensembles.

All grades perform in the all-school winter and spring concerts with field trip opportunities sprinkled in. 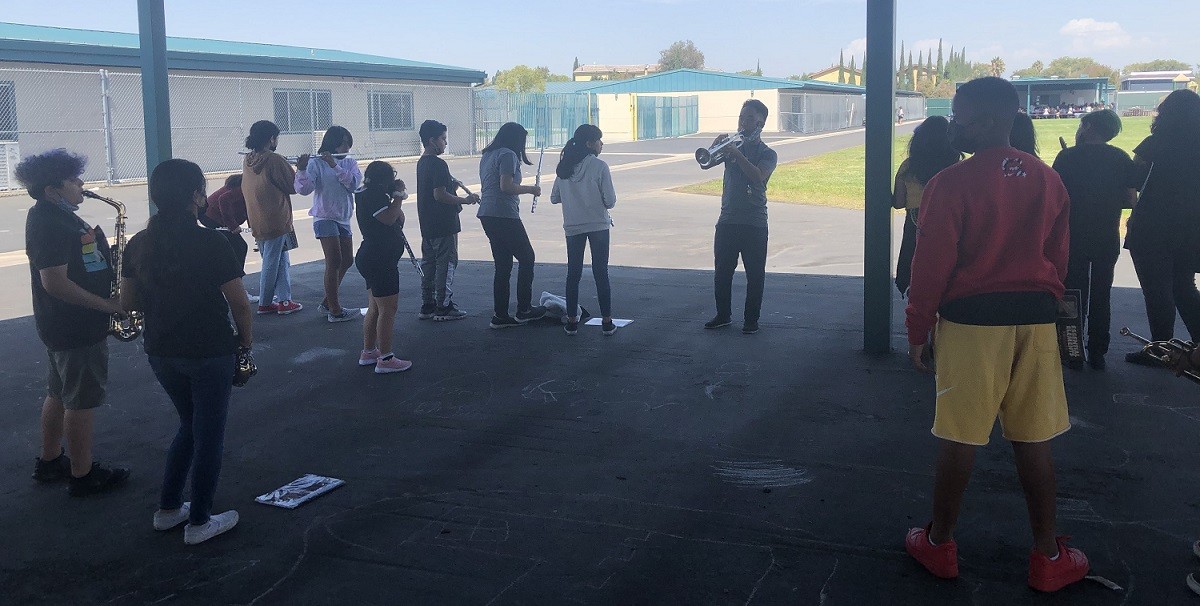 In past years, Orange Grove students participated in the Class Act program through Pacific Symphony, which introduces elementary students to symphonic music. The program focuses on one composer each year — Pyotr Ilyich Tchaikovsky was studied in 2018-2019 and John Williams in 2019-2020. The symphony also assigns a professional musician to work with the students. “After they get their lessons from the professional musician, it’s up to each grade level to come up with some sort of demonstration of their knowledge,” Villanueva says. “That could range from a performance or a dance [to a presentation]. We generally make it a performance demonstration.”

Students showcase what they learned at an assembly, and 2nd through 6th graders end the unit by taking a field trip to Segerstrom Center for the Arts to hear the symphony.

“In my first year of teaching, I had no idea where each student was [musically],” Villanueva says. “In the beginning, we would start off with learning ‘Hot Cross Buns.’ But then as I became comfortable in my position, I started to be a little more adventurous. For example, we studied Tchaikovsky, so I had my 3rd graders at the time play the ‘Sleeping Beauty Waltz’ on recorder, melodica and piano. That was a little bit ambitious, but I’m glad that we did it. … Given enough effort and dedication, [even] these 3rd graders can pull off something that would typically be reserved for a middle school or a high school student.”

The young musicians also perform in community events — some that have become traditions while others vary every year. Villanueva has taken kindergarteners to perform for Dias De La Muertos, 2nd graders to participate in The NAMM Show and 6th graders to the Meet on Beach event in Buena Park.

Villanueva had planned to take 5th graders to a country-western event that didn’t end up occurring. The 6th graders also march in the annual city Halloween and Martin Luther King Jr. parades, and teachers can send a variety of groups to the district’s Music, Art and Creativity Festival.

“There are a couple of districtwide things, but for the most part, it’s up to each individual teacher to decide whether they want to do the field trip,” Villanueva says. 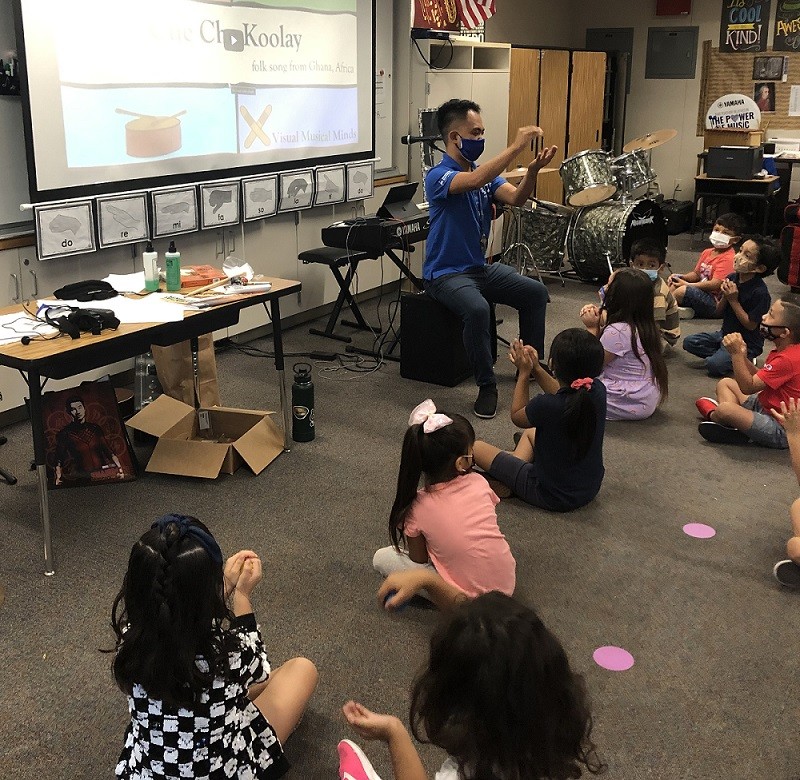 Villanueva brings more and more new ideas to his classes because he is constantly learning through his recent master’s program as well as during freelance gigs, professional development classes such as Little Kids Rock educational events, and side work with the Dragon Kim Foundation.

“Because I have a lot of background with modern band …, we do a lot of popular music [like] Bruno Mars,” says Villanueva, who writes the elementary arrangements himself. “That’s one of the big things that I love about teaching elementary — it’s also a way for me to learn things for myself. I didn’t grow up deeply into hip hop until I was much older. … That’s been a fun journey teaching kids one thing and being able to apply that in my professional life as a musician.”

Like many other music educators, Villanueva says that he struggled with finding a rhythm for engaging students in a virtual setting during the pandemic. He decided to use the opportunity to teach musical composition — how to create drumbeats, melodies and lyrics. He also dove into societal issues, including how African and Mexican cultures influence the music world today.

At the final concert each year, Villanueva lets students in each grade pitch their ideas for the songs to perform. “I believe in students’ choice toward the end of the school year,” he says. “I set some ground rules. It has to be achievable, no curse words and no suggestive themes.”

In 2019, 6th graders played “Thousand Years” by Christina Perri. In the future, Villanueva says that he would like to incorporate more guitar and more songwriting in the upper grades as well as have the entire school perform a song together.

Overall, Villanueva helps students form a connection to the music. “I make sure that things that are performed are culturally relevant and achievable,” he says.