Case Study: In this Rural Town, Band is Family

In Pierz, Minnesota, the high school band director promotes a family atmosphere to grow and sustain his music program.

Every fall, band director Joel Pohland starts fielding the same question — “When is jazz night?” — from excited members of his community in Pierz, Minnesota. Even though jazz night, which takes place in April, may be at least six months away, it’s still on everyone’s mind.

Now going into its fifth year, jazz night started as a two-hour concert featuring performances by the jazz band from Pierz Healy High School, where Pohland is the band director. Profits from ticket sales benefit the school’s music department, and the event has become one of Pohland’s favorite fundraisers.

In 2020, jazz night was canceled because of the pandemic, so the community was more than thrilled about the return of the performance in 2021. Indoor events were still considered unsafe, so Pohland took jazz night outdoors. This decision became one of the event’s strongest assets. Attendees brought lawn chairs and coolers to the event, and at the end of the night, audience members requested that Pohland hold the event outside the following year as well.

Pohland latched onto that idea and decided to expand upon it. “The 2022 jazz night was held at our golf course, and a local community group provided food,” he says. “Our FFA (Future Farmers of America) team sold ice cream to raise money. Now jazz night has turned into a community event.”

The students have fallen in love with the event, too. “I have students who will buy a suit just for jazz night. They get all dressed up, and they’re super pumped,” Pohland says. “It’s turned into way more than I could ever have imagined.”

Pierz Healy High enrolls less than 600 students, but the music program boasts a concert band, symphonic band, two jazz bands, a musical pit band and a pep band. Through fostering an environment of trust and innovation, Pohland creates a big musical impact in this small town.

Music in the Family

One of the keys to building a successful music program in a rural area is to create a tight-knit community and foster familial bonds among teachers and students. For Pohland, this family connection was second nature, as music has long been a part of this family.

Pohland’s father and brother are also band directors. After graduating from Loras College in Dubuque, Iowa, where his father teaches (and where Pohland met his wife, Kaitlin), Pohland sought advice from his own family as he ventured into the world of band directing.

“We all talk once or twice a week,” he says. “We run music by each other and talk about what’s working or what’s not working. The problems I go through, my brother, who’s the band director at New Prague High School, has been through because he’s taught for longer than I have.”

Often, these regular conversations lead to improved experiences for all three directors. “[When] we come across something new, we share it, so when [another one of us] inevitably runs into it, we have some background on it,” Pohland says. “We talk about a new piece of music, a new travel experience, a new festival that we’re planning on participating in, playing the national anthem at a Minnesota Twins game and much more.”

Having open, honest conversations isn’t only beneficial with his own family. Pohland has also found that building personal connections with students helps the program gain a sense of camaraderie. He says that one of the keys to building a trusting relationship with students includes “sharing my stories — sharing why I’m passionate, why I’m energetic about music.”

This may include discussions of off-topic hobbies and interests because the key is to show genuine interest in one another as people. “I love to golf, I love to run, I love to travel, so I share those things with my students,” Pohland says. “Building connections goes beyond just music connections.”

Major life events have also strengthened Pohland’s bond with his students. “My wife and I just adopted a child,” he says. “I shared that entire journey with my students because it was important to me. My students became invested in our story, and they felt like they were part of it.”

While these topics are not related to music class, they go a long way toward building rapport with students. “If you can find ways to connect with students about their personal lives, it’s so much easier to go, ‘Hey, now I need this for us in band. I need us to really step up,’” Pohland says.

As a result, students are often eager to help and more likely to take initiative with tasks like setting up before concerts. The program also has a stronger impact on students’ lives. “If you want it to feel like a family, you have to run it like a family,” Pohland says. “I found that it really works here because we live in a small community, and we have a lot of family connections.”

Building a musical family is a natural step for the students at Pierz Healy, many of whom are literally related. For example, one of the school’s jazz bands has 23 students, with 17 of them related to another student in some way, whether as a sibling or a cousin.

These family connections make for fun photos at school concerts. “We do a mass band concert [with] 300 students performing,” Pohland says. “It was so cool because afterward you see 5th graders to our seniors come together for these giant family pictures.”

While a close-knit musical family may sound like a dream come true, maintaining a music program in a small, rural town comes with its own unique challenges. Some students may struggle to make it to every rehearsal when they have other commitments at home like working on their parents’ farm. Other students may struggle to get to rehearsal on time when driving to school takes 30 minutes or when Minnesota weather rears its destructive head.

Solving these problems requires careful scheduling, coordination and communication. For example, due to other conflicting school activities, Pohland holds jazz band rehearsals at 7 a.m. before school starts. “I have students who live 30 minutes away. They’re leaving their house at 6:15,” Pohland says. “On a night when there’s weather, I have to think about [making] sure students are safe.”

To ensure safety, Pohland offers an open line of communication to his students. He asks that students send him a message if they’re planning to be late and emphasizes that it’s more important to drive safely than to arrive to rehearsal on time.

He also regularly converses with coaches, teachers and leaders of other activities to ensure students get to participate in everything. “We’re limited in numbers. The student body wants to be a part of everything, which is so cool,” Pohland says. “I love that our football captains, the members of the speech team, our drama department, all those kids are in music. It’s something I take a lot of pride in.”

Having overachieving students is definitely a point of pride, but it’s also often a source of scheduling conflicts. “The biggest thing is flexibility and communication,” Pohland says. “We have students who are athletes, and sometimes they’ll shoot me a message the night before saying, ‘Hey, I forgot we have a morning practice. I won’t be at jazz band.’ If I need something, I’ll say, ‘We need to have this jazz rehearsal, can you let your coach know?’”

Pohland often works with coaches directly to coordinate schedules that alternate each side’s give-and-take. “Communication usually fixes everything,” he says.

Reaching Out in a Rural Community 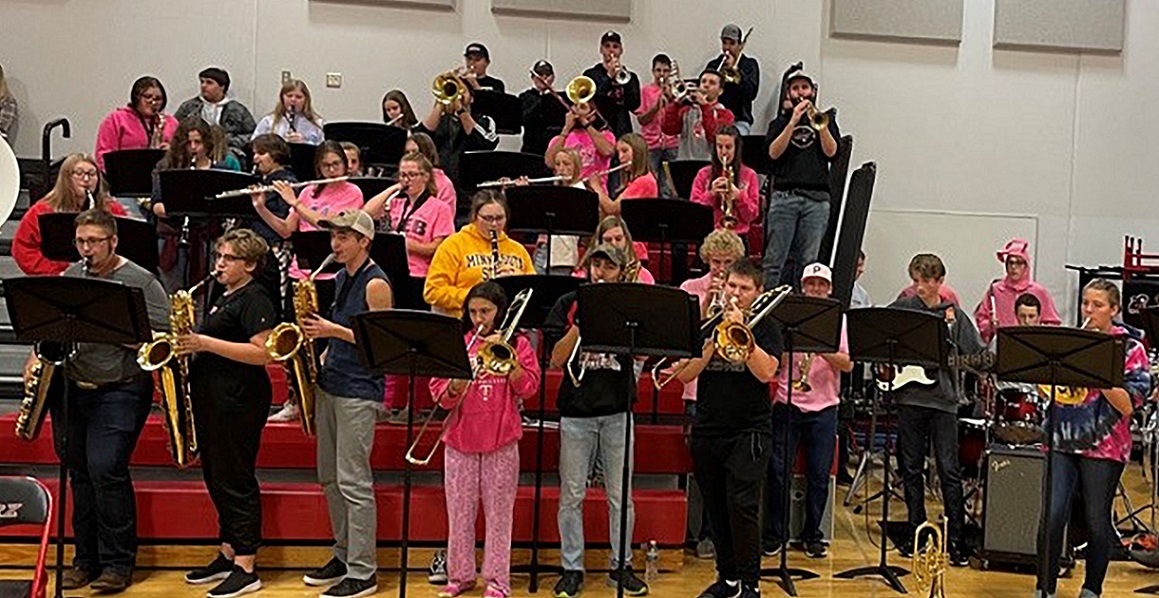 Communication goes hand in hand with community outreach. One of the benefits of building a music program in a small community is the ability to get students directly involved with community performances.

In Pierz, the pep band is a community staple. While many people think pep bands are just for football and basketball seasons, Pohland has expanded the Pierz Healy pep band’s reach by having them perform for an array of sporting events, including football, volleyball, tennis, cross country, and both boys’ and girls’ basketball. “We have students who are really enthusiastic about pep band,” Pohland says. “I love pep band. I love being at games. That comes back to building relationships.”

While directing the pep band, Pohland loves when he sees some of his band students competing as athletes on the field or court. “I can say, ‘Nice job at your game last night,’ and they’re excited that I was there.”

Pohland also loves organizing community performances around the holiday season. Every year, the school’s jazz band plays holiday music for residents at local nursing homes. “It’s so heartwarming,” Pohland says. “The students feel amazing, and we get to perform for people who might not have a visitor. This music brings joy to their hearts.”

Viewing music as a universal source for joy and human connection is at the heart of Pierz Healy’s success. By using his town’s small size to his advantage, Pohland has taken his young musicians from merely an ensemble to something much stronger: a family.