A band program in a border town in Texas performs — and excels — in the same league as larger competitive ensembles.

In a sprawling state like Texas, it might be easy to overlook the small town of Roma that sits along the Rio Grande on the U.S.-Mexico border.  But that would be a mistake because the Roma Independent School District has cultivated a unique and successful music program thanks in large part to Dena Laurel, who came to Roma High School as an assistant band director in 1997 and then moved up to become director of bands in 2008.

Although the majority of Roma High School families struggle financially, the 220 students in the band thrive on hard work, organizational ingenuity and community support.

In concert band, Roma has had even greater success. At the Texas Music Educators Association Honor Band competition, the high school band placed seventh in 2018, and Roma Middle School placed second in 2016. 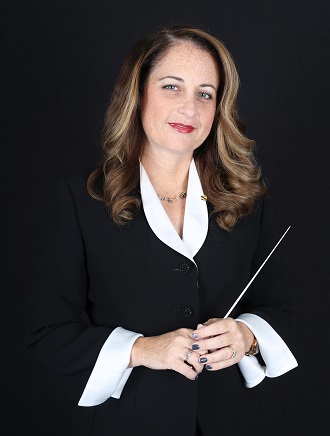 A focus on instrumental technique with more personalized instruction helps the Roma band program defy expectation. With the next closest city and colleges about an hour or more away, private lessons are simply not an option, even if the students could afford it. That’s why Roma’s band department turns its extremely rural location into its biggest asset.

Between the high school and two middle schools, Roma has a team of 12 band instructors, each specializing in one instrument. Though they each have a primary campus, they drive to all three schools every day to teach their specific students.

“When I was teaching French horn, it was almost [like] a college setting, like I was running a studio,” Laurel says.

In middle school, students focus almost completely on working with their teachers by section, with the band as a whole coming together only when preparing for a competition or performance.

“I think it’s one of the best programs in Texas because it provides a teacher for each instrument, which is not very common,” says Orlando Medrano, a Roma alumnus who returned to the program as a tech and is now a professional musician. “The students gain more knowledge and become more competent in playing.”

Beyond the technical advantages, having the same teacher for six years results in lifelong mentorship. “We have a really special bond with the students, and we get to watch them grow,” says Corey Graves, Roma Middle School head director and district euphonium teacher.

Currently, nearly 50 percent of the incoming sixth graders join the band program each year. Laurel and her team focus on recruitment with high-energy classroom visits and band performances for fifth graders. “We have all the teachers leave some time in the schedule for recruitment,” Laurel says. “There are so many music programs here that if we didn’t, [all the students would] gravitate to the mariachi or Mexican Banda programs just because they’ve grown up in that culture. They don’t really know what a concert band is or [what it] does.” 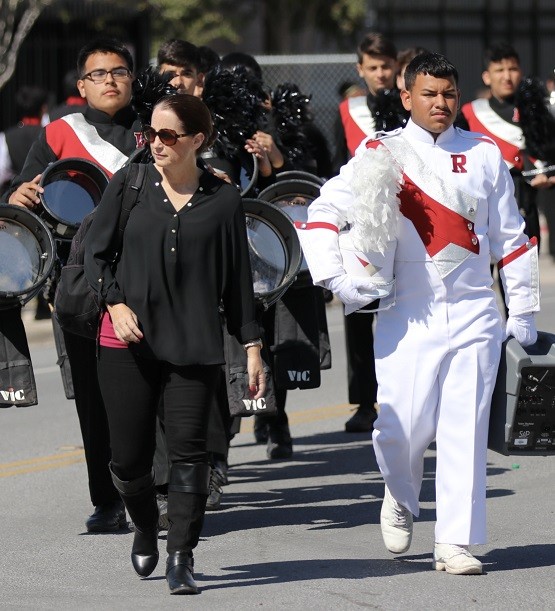 The lack of funds can sometimes be discouraging, but Laurel and her team constantly reinforce a “never-give-up” outlook that brings the community together. Whether with chocolate bars, catalogs or football game concessions, the students and parents constantly fundraise because band fees would be impossible to collect.

“I have parents and band moms who come in after school and make tons of spaghetti because they know that after practice, there’s not going to be any food at home for the kids,” Laurel says. “Though all the families are poor, those that have a little more money give as much as they can.”

When competing in UIL or BOA, Roma comes into contact with bands of very different sizes and situations, some with electronics, props or new instruments. “The amount of money on the field [at these competitions] is extremely intimidating, but I always tell everyone it doesn’t matter — it’s about playing better and marching cleaner,” Laurel says.

As a student, Medrano says that he and his bandmates viewed the exposure to other programs as motivation. “It’s something that we looked forward to seeing every time we went to a competition because although we couldn’t afford all those things, we worked just as hard as them,” Medrano says. “We matched their level of musicianship and did the best we could on the marching field even though we didn’t have what they could provide. A lot of times those bands would have higher scores than us, but it never phased us, and we just worked even harder.”

According to Medrano and Graves, Laurel’s willingness to delegate and ask for help is one of her greatest strengths. “She is an outstanding leader; she has a big program that requires a high level of commitment and organization,” Graves says. “She delegates responsibilities to those who are really great at what they do, and that’s what helps the program.”

Laurel’s dedication is noted and ap­preciated by more than those associated with the band program. In 2018, she was recognized as the district’s Secondary Teacher of the Year.

Roma often brings in clinicians or outside help to work with the band. “[Laurel] brought a lot of people who were experts in the field of marching band or music-making and was never afraid to let other people teach her band,” Medrano says. “She … understands when something needs to be done that she can’t do. That’s something that I learned from her.”

Because Laurel studied music per­formance and not education in college, she says that asking for help and guidance was a saving grace in her early years as a band director, and she continues to consult others. “Don’t be afraid to reach out,” she says. “The worst thing that can happen is that they say, ‘no.’ [But] they’re usually excited to help and excited for your program to do well because that’s another great program that they’re affiliated with.”