The jazz program at Southeast Missouri State University has experienced tremendous growth and expansion thanks to the innovative vision of Dr. Joseph Jefferson.

In February 2023, the annual Clark Terry Jazz Festival at Southeast Missouri State University (SEMO) will present something new at its Friday night gala concert: A repertoire of works exclusively by women.

Each year, the festival features something different. Past years have included performances by Andre Hayward (trombone), Mike Tomaro (composer, arranger and saxophonist), Craig Fraedrich (composer, trumpeter), the U.S. Army Blues, Dr. Alton Merrell (jazz pianist) and more. One constant for the Clark Terry Festival is that no two years are alike. 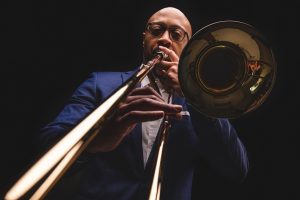 In the midst of COVID lockdowns, the festival embraced one of its biggest changes yet: Going virtual for a year. But under the leadership of Dr. Joseph Jefferson, director of jazz studies and associate professor of trombone and euphonium, SEMO was up for the challenge.

Jefferson arranged five virtual clinics centering on topics like transcription, improvisation and jazz drumming. Guest performers couldn’t travel to Missouri for an in-person show, so Jefferson arranged for a group of guest musicians from New Orleans to perform while students hosted a watch party to view the performance. Attendees from schools in the area could access all these virtual resources. Kevin Hampton, SEMO’s music chair, called Jefferson’s solutions to the pandemic “incredibly creative.”

During his five years teaching at SEMO, Jefferson’s innovative approach has led to explosive growth in the jazz program. Embracing change is such an integral part of his teaching experience that it has become core to his educational philosophy. “I implore that students are open to new things in their world. They need to understand that the only thing that remains the same is change,” he says. “Change is always happening. We should want to lean into change as much as we possibly can so we can be the best educators and the best humans.” When Jefferson began teaching at SEMO in the fall of 2017, he inherited a small jazz program, with just six students in the non-audition Jazz Lab group and 11 in the audition-based Jazz Studio ensemble. He has since expanded those groups, which now boasts 26 students in the Jazz Lab and 20 in the Jazz Studio. “To see the growth of students has been pretty remarkable,” Jefferson says.

The secret to attracting new students? Jefferson’s energy, enthusiasm and unbridled passion for the art of jazz. “You have to have a certain energy about you to get students engaged,” Jefferson says. “My students can see that I’m very active with them. I leave school worn out every day. I put so much into my teaching.”

With the growth of the program came an increase in performance opportunities. SEMO’s jazz students were used to three yearly performances — a fall concert, their gala concert performance at the Clark Terry Festival, and a spring concert. Since Jefferson began leading the jazz program, students now have additional performances, including a big band holiday jukebox show and Celebrate the Arts, which is in collaboration with the music department and the Jeanine Larson Dobbins Conservatory of Theater and Dance.

Give ‘Em Stuff, Not Fluff

When describing his energy as an educator, Jefferson says, “I think it’s important to ‘give ’em the stuff.’ They need the real-deal stuff. They don’t need me to give them fluff.” 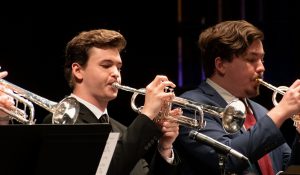 According to Jefferson, the “real-deal stuff” means a well-rounded approach to a jazz education and intentional programming. It’s not just learning about the music itself, it’s important to understand the context surrounding that music. “Students need to understand the historical context, what was happening in the world when this music was written and why it was written,” he explains.

Part of this well-rounded education includes organizing performances that feature different genres and composer demographics. This coming spring, Jefferson is hosting a blues concert “to showcase the importance of the blues, gospel and the spiritual aspect that are essential to this artform.”

Jefferson also employs this approach when organizing the Clark Terry Festival. “Each year, I try to strategically bring in an artist from a different instrument type,” he says. He adds, “I don’t want the audience leaving only knowing one aspect of this rich artform.”

The Festival’s Humble Beginnings and Growth

As part of his endeavor to teach a diverse range of perspectives in music, Jefferson has put together a gala concert featuring compositions and arrangements by women for the 2023 Clark Terry Festival. The show will also feature saxophonist Sharel Cassity as a performer. But this year’s women-focused gala concert is just one aspect of what makes SEMO’s annual jazz festival special.

The Clark Terry Festival was started in 1998 by music fraternity Phi Mu Alpha Sinfonia, of which Jefferson is a member. Clark Terry, the legendary jazz trumpeter, was the guest artist at that first concert. Over the years and throughout various guest artists, the name stuck.

Much like the jazz programs at SEMO, Jefferson has worked hard to grow the size and scope of the festival during the past five years. “During my first year, we might have had 16 or 17 bands [participating],” Jefferson says. “With a new person coming in, you have to test the waters and get adjusted.”

Since Jefferson’s first year, the festival has nearly doubled in size; the largest festival was in 2020 with 32 participating bands. “That’s remarkable for this area,” Jefferson says. “We’re pulling from schools not only in Missouri, but Illinois and Kentucky.”

The Clark Terry Festival serves as a personal development opportunity for local high school band directors through clinics and workshops. Additionally, the festival is a recruitment tool for SEMO to introduce prospective students to the jazz program and the music department. “We believe if we get students on our campus, they’ll fall in love with it. It’s absolutely gorgeous,” Jefferson says. “Students get here and fall in love with the opportunity to create and perform. They’re surrounded by amazing music faculty who are excited about wanting to help them improve and grow.”

According to Jefferson, even though the Clark Terry Festival began 25 years ago, due to various roadblocks, the festival has taken place 23 times so far. One recent obstacle was the COVID-19 pandemic, which shut down schools around the country. While the festival was virtual in 2021 and cancelled in 2022 because of COVID, Jefferson found innovative ways to provide participating schools, as well as his own students, with enriching jazz resources. 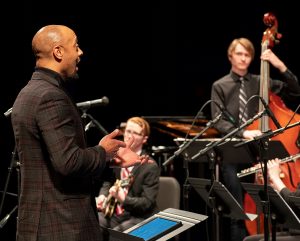 For example, Jefferson organized a live virtual performance from New Orleans featuring musicians like Ashlin Parker, TJ Norris, Amina Scott, Gerald Watkins and John Michael Bradford. While the musicians performed in the studio, students watched online. “It was great,” Jefferson says. “We did a watch party in our big space. We also shared access to that performance free of charge with high school band directors and community members so people could see that we were still trying to stay connected.”

While adapting music education during COVID was difficult, Jefferson felt ready for the task because he had already been using virtual programs like Skype and FaceTime. When the pandemic began, he learned Zoom as well.

Keeping a group of music students engaged online was a challenge, but Jefferson utilized one of his favorite resources: his connections with other musicians to put on clinics. “I reached out to a lot of my friends,” Jefferson says. “Vincent Gardner, a fraternity brother of mine and lead trombonist for Jazz at Lincoln Center, gave a masterclass on improvisation, listening, style, performing in a big band setting and other general jazz topics.”

In addition to putting on a variety of masterclasses, such as “Understanding the Blues,” “How to Play a Jazz Ballad” and “Finding Players You Like Who Play Your Instrument,” Jefferson gave his students assignments that translated well to the online learning format, including transcription and listening exercises. He hosted weekly check-ins with his students, and throughout the process, kept a “this-too-shall-pass” attitude.

Jefferson’s adaptability during the COVID lockdown was indicative of his overall philosophy of staying open to change and new opportunities. Even under normal circumstances, Jefferson still tries to think outside the box to enrich students. “I try to provide numerous opportunities where they are getting information from people outside of this area. We have a lot of students who come from smaller areas of Missouri and around the country,” he says. “I’ve been around so many different people in so many different places. It’s important for my students to have diverse learning experiences as well.”

One such opportunity came last spring, when Jefferson and the Jazz Studio was invited to participate in a Jazz Educational Residency at Jazz St. Louis. Students attended a concert and also performed for drummer extraordinaire Bryan Carter, who gave them critiques as well as a masterclass. “It was a really great experience,” Jefferson says.

Jefferson saw his efforts rewarded this past January when he received the Jazz Education Network’s 2022 Ellis Marsalis Jr. Jazz Educator of the Year Award. The award, named for jazz pianist and educator Ellis Marsalis Jr., is presented to a collegiate jazz educator annually at the Jazz Education Network Conference. “When I found out I won, I was absolutely blown away,” Jefferson says. “I remember the first day I walked on campus [at Southeast Missouri State] and the first band I had. Transitions are often difficult. To gain supporters who understand the purpose I’m trying to put behind [my program] was … a monumental thing.”

In the months since receiving this award, Jefferson has stayed motivated to continue improving as an educator and performer. “It encourages me to continue to grow,” he says. “I tell my students, ‘We must be lifelong learners.’ We must be adaptable. If we don’t, we’re doing a disservice to the art and to ourselves.”

Southeast Missouri State University’s Holland College of Arts and Media is one of 10 distinguished colleges and universities selected to be part of the inaugural Yamaha Institution of Excellence program, which recognizes extraordinary commitment to innovation in the study of music. The Yamaha Institutions of Excellence were chosen for their dedication to providing unique and challenging experiences to music students through diversity of thought and curriculum. They are also recognized for exposing students to a wider variety of voices and opportunities and preparing them for the modern world of music.