At Teasley Middle School in Canton, Georgia, a new band director rallied his community to win Yamaha instruments for an expanding band program.

Mobilized by band director Sean Furilla, the community of Canton, Georgia, came together in a widespread show of support for the Marie Archer Teasley Middle School band.

Parents, staff and community members worked together to win five brass and woodwind instruments from Yamaha worth $20,000.

“There’s still a buzz around our community,” Furilla says. “[It] created support for our music program that continues to grow. Yamaha not only donated instruments, but it charged our community with an awareness of how supporting music education can change the lives of students and families.”

The prize came at an especially crucial time for the Teasley band. Furilla became director in 2012 with 150 band students. Many of their instruments had been in use since 1986 — the year the school opened.

Furilla grew the program to 250 students in 2013. Then in September 2014, the school moved to a new campus, adding sixth graders. Band enrollment increased to almost 500 students. “It is a good problem to have!” said Dr. Susan Zinkil, Teasley’s principal, in a district press release. “We are so proud of how far our band program has come.” 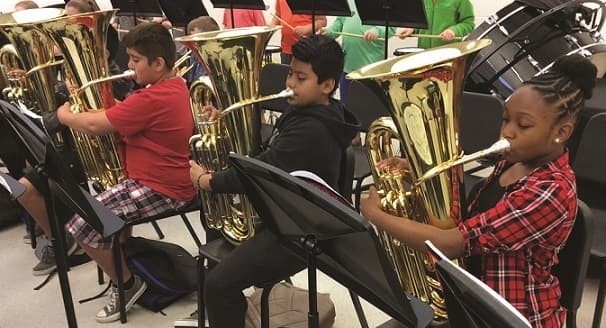 Teasley is a Title I school with 53 percent of its 1,400 students on free and reduced lunch. Many students and families in the band program rely on borrowing school-owned horns.

Because of Furilla’s mission to include everyone regardless of financial constraints, students sometimes need to take turns playing instruments in class with some just blowing through their mouthpiece and mimicking the fingerings.

The new Yamaha horns — two tubas, two bass clarinets and one French horn — have made a big difference in giving more playing opportunities for the students. “Now I’ve got a sixth grade class with eight tuba players, and each one of them is able to have a tuba in their hands,” Furilla says. “If it wasn’t for Yamaha and those two tubas that I got, I would have two students that would be playing on their mouthpieces and not have an instrument to play on.”

Playing a new instrument right out of the packaging has led to increased dedication from some of the benefitting students. “By creating a situation where we have new instruments in the hands of students that care deeply about music, it gave them a bigger sense of pride,” Furilla says. “It was great to see the students opening the cases, seeing their faces as they’re unwrapping the instruments from the cases. That whole process gave them more of a connection and a sense of pride not only to the instruments but also to our music program.”

Eventually Furilla hopes to have enough instruments, so that students in different class periods won’t have to share, and each student could take an instrument home to practice. The school needs to purchase at least 30 instruments.

“I’m still in the process of trying to create the funds to buy more instruments because I don’t have enough funds to have each tuba player have a tuba at home,” Furilla says. “We’re still working toward that.”

The Quest for Music Education 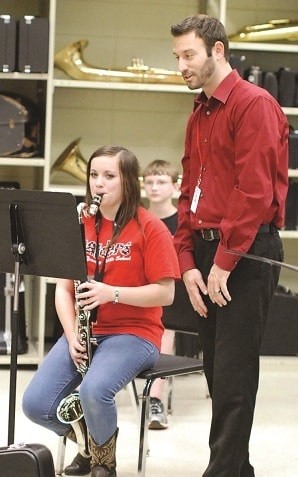 Teasley won the instruments in May 2014 through a Yamaha online contest, “The Quest for Music Education.”

Furilla had extensive experience performing with Yamaha instruments as a member of The Cadets Drum and Bugle Corps staff based in Allentown, Pennsylvania. He first heard about the contest from a fellow instructor at the Yamaha-sponsored drum corps.

“I can think of no better company for consistent high-quality instruments than the Yamaha Corporation,” Furilla says.

For the competition, bands recruited adults in their communities to complete online quests on a variety of topics, including Yamaha Artists, Yamaha internships and music advocacy. “Because the Quest was educationally charged, they got information on backgrounds of musical instruments, different families of musical instruments, composers,” Furilla says. “The Quest was more than just [an online voting contest].”

At Teasley, Furilla convinced the school to devote faculty meetings to participating. But beyond the staff, teachers and booster parents (both at the middle school and local high school), he also used his ties to small business owners in downtown Canton, where his wife runs a company.

“Every opportunity that I was at a microphone, I was mentioning the Quest and the difference it could make in getting instruments into the hands of our students,” Furilla says.

Under Furilla’s direction, the band students spread the word to families and neighbors across the small town. “The most important thing for me was to get as much of the community involved in it as possible,” Furilla says.

“What I went after were instruments that we were in great need of,” Furilla says. “Both of the tubas that we had were from the ’80s, and they were put together with duct tape.”

Winning the Quest has helped with some of the more difficult instruments to find. “I really went after the instruments that were more expensive and harder for people to donate,” Furilla says. “It’s easier for me to get clarinets, trumpets, saxophones and flutes … but much harder to get some of those unique instruments.”

The excitement and publicity that Furilla generated from the Quest led to even more support beyond participation in the contest. For example, the band’s prior winter concert attracted 1,200 audience members, and many generously donated money and instruments.

“Families, community leaders and local businesses have jumped on board in support of music education because they believe in its power to mold our children and change our world in a better way,” Furilla says. “It’s still a daily battle. Our program is still in an ongoing effort to provide instruments for students in need, but [this] lit a giant spark that propelled us forward with our mission.”

This article originally appeared in the 2016 Spring issue of Yamaha SupportED. To see more back issues, find out about Yamaha resources for music educators, or sign up to be notified when the next issue is available, click here.