Football and Band: A Match Made in Heaven?

Build teamwork and collaboration within your music program and throughout your campus community by working with athletic coaches and spirit team directors.

Use the relationship between your athletic and spirit organizations to strengthen your campus community. Look at football games as a chance to showcase your music program while supporting and enriching the school’s culture. Pep rallies, playoffs and athletic events are a fantastic time to show the band’s versatility.

Here are some of my strategies, suggestions and thoughts about creating a strong relationship between football and band, such as what music to play, how to build relationships with coaches, how to balance this with other events, the importance of being visible at community events, and how all of this can create a support structure for your program goals. 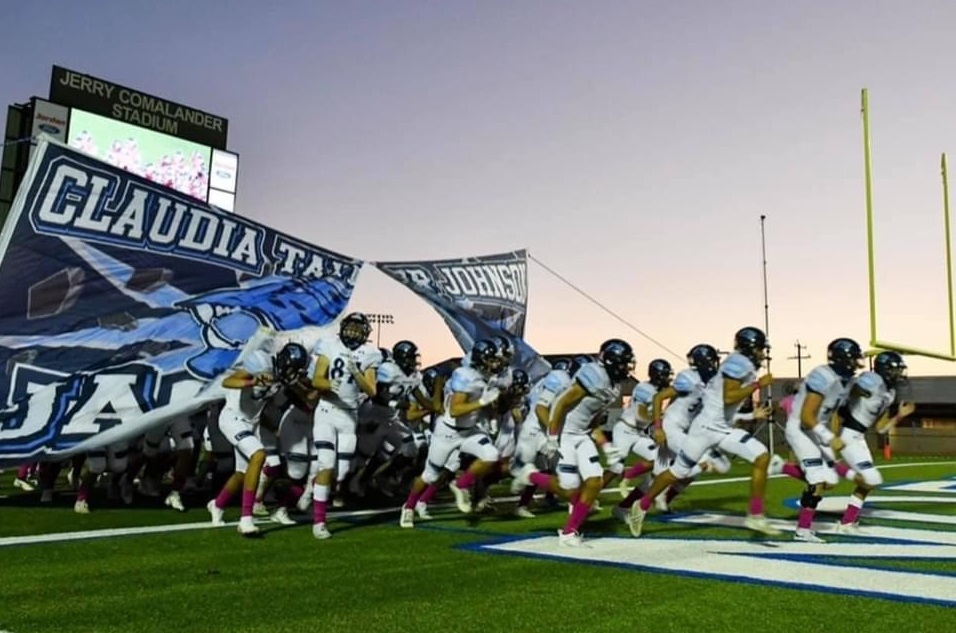 Texas is known for great football. And where there is great football, there is often a great band. Players, coaches and spectators appreciate the energy and presence of the marching band in the stands and on the field during halftime. The band brings more fans to games, increasing the crowd’s size and spirit.

Bringing together football, band and the spirit teams — the school’s largest organizations — can positively impact all aspects of campus life. The relationship between football and band fosters goodwill and mutual respect. Directors should create an environment where the band serves as the “connective tissue” between sports and the spirit groups. This takes effort and compromise.

I admit that I struggled with this for a long time. Only recently have I come to appreciate how these relationships can boost overall school spirit as well as morale within the spirit groups and each sport team.

You Get Out What You Put In

This best sums up my relationship with our athletic department since Claudia Taylor Johnson High School (CTJ) opened in 2008 in San Antonio. As a young teacher, I was driven toward a single mission: To build the best band possible. Anything that fell outside the spectrum of improving our marching and playing skills was deemed a distraction from that goal. 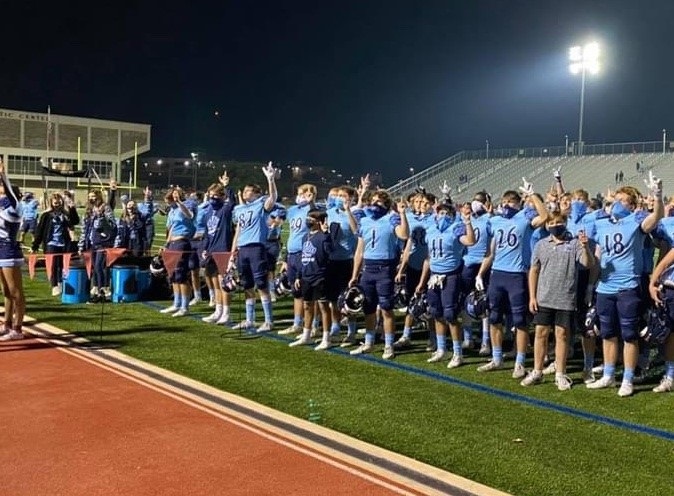 I resented the constant “drumbeat” from spirit and athletic organizations that always seemed to want a piece of our time. “Send us a drumline for this,” “Can we get a pep band for that,” “The band can’t miss that game for the biggest contest of the year.” There always seemed to be someone requesting the band at an event that took time away from rehearsals.

I wanted to practice, and I wanted my students to focus on what we were there to do — be great at marching band. I resented that football, basketball and dance were able to focus on their activities without being called to serve as a “jukebox” for every event on the calendar where someone thought that the band could add a little “ambiance.”

At games, we rotated between 12 or 13 stand tunes, plus the fight song and the school song. These tunes took a while for my young students to learn in the early years because of the complicated rhythms and syncopations. We received regular critiques from football parents that we didn’t play loud enough or didn’t play the “right kind of music.” It was, to say the least, a bit disheartening. It seemed that everything we did was under fire. At this time, our band was starting to do really well in competition, so I felt frustrated that the community seemed to focus on what we were not doing instead of what we were actually achieving.

Around my fifth or sixth year, I began to reflect on why the band’s relationship with spirit and athletics was not as strong as it should be. I remember talking to then-Principal John Mehlbrech, who encouraged me to take a step back and try to see the bigger picture. He was at every band event and worked so hard to support us. Even though I heard what he said, I don’t think I was really listening.

The band worked harder to be more energetic at pep rallies and play better music, but I still wasn’t “feeling the love” from or for my colleagues or the athletic community. Finally, in 2020, when the pandemic hit, things clicked for me — during my 13th year of teaching.

Unity through Adversity: Preparing for the “Pandemic Season” 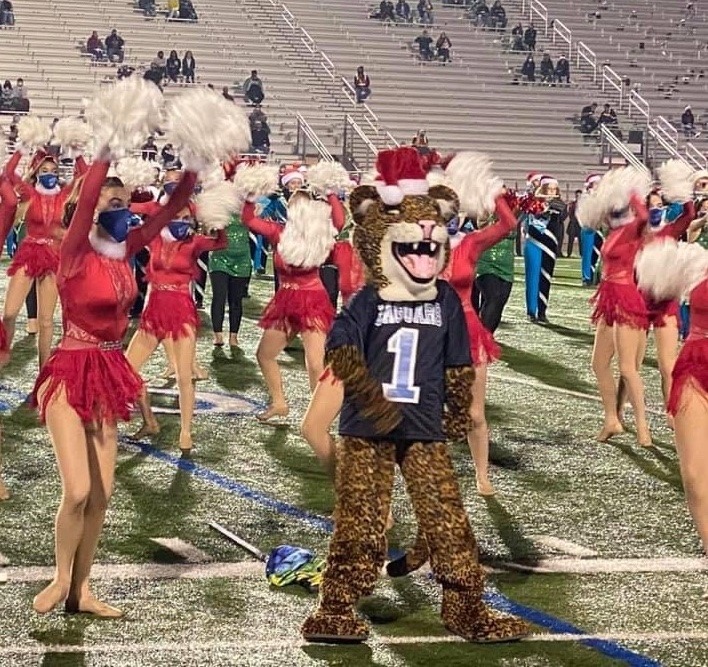 In June 2020, we started discussing the upcoming season and whether the football season and marching competitions would occur. I spoke weekly with Principal Gary Comalander, head football coach Mark Soto and dance team director Stephanie Trevino. My goal was to gain insight into the community outside of band to gauge the desire to participate in a season of some kind.

I learned that Coach Soto and Director Trevino were already working on plans of their own to move forward with a season. We hit a setback when the start of school and our season was delayed until after Labor Day, but thanks to the open communication among the four of us, we were able to navigate the challenges and eventually proceed with practices. The bond that we developed during the summer preparation only grew stronger as the season progressed, and our students and parent organizations began to emulate the relationship they saw among the campus leadership.

Our parent organizations helped each other with safety preparations, including hand-washing and bottle-filling stations. Our students encouraged one another to participate and stay healthy so that we could continue moving forward.

Through the weeks of preparing our groups for our initial performances, we were communicating so regularly that any time an issue came up, we leaned on one another for emotional support and guidance. Mr. Comalander’s steady guidance and leadership gave us the courage and strength to tackle the day’s challenges. The camaraderie that had evolved among spirit, athletics and band made it feel much less lonely.

A Successful Season and a Glimpse of the Future

Though socially distanced and in masks, the first pep rally with band and dance was an emotionally charged event. The spirit groups and band were pumping each other up in a way I had not experienced before. When it was time for the first football game, we were all a little nervous about how it would play out.

I watched the football team race to the band and spirit squads after defeating a rival team and start jumping and cheering. The band members were screaming and returning the energy back to the team. As the season evolved, this connection only grew stronger. The football team continued to win games, the band and spirit teams got closer, and we all looked forward to the end of the game when the football team would run over with joy to celebrate. We all worked harder to play louder and better and added some new stand tunes to our repertoire that would pump up the team and help them win. 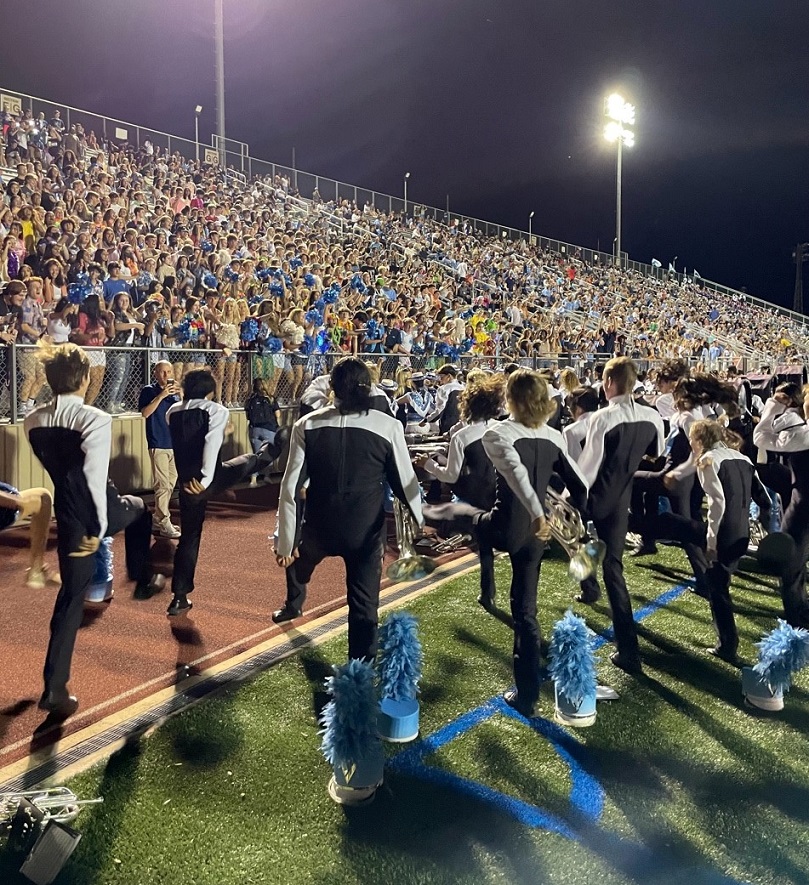 Our season in 2020 extended nearly to Christmas because of the schedule change, which allowed the spirit groups the opportunity to perform “Holly Jolly Holiday Parade” together at halftime in our “Holiday Extravaganza” show. This performance showcased the unity of our various teams and represented an entire season of working to support each other, overcome obstacles and keep our students safe. It was the culmination of sharing ideas and pursuing a common goal. This special energy and synergy provided a glimpse of what it could be going forward.

In 2021, I wondered if the energy of 2020 would repeat itself, and I was delighted to see that it did! With the return of the packed student section in the stands (called “the jungle”), the drumline and band members made it a tradition to energize the section during the third quarter by playing “Blinding Lights,” “Welcome to the Jungle” and “Bula!” (See photo to the right.)

The students in “the jungle” were gracious in a way I had not seen before. Their energy inspired the band members to give even more passion to the game and the players.

The shift in my attitude and the collaboration with the administration, football coach and dance director during the pandemic opened new doors for the team and our entire school community.

17 Ways to “Reach Across the Aisle”

This positive energy that is shared among the football, band and spirit teams is part of the culture at many other programs in San Antonio. Some great ones that have inspired us at CTJ include James Madison High School with Philip Flynn and Evan Berry, Brandeis High School with Richard Herrera, and Winston Churchill High School when our own Alan Sharps was leading the charge. These programs built strong relationships with their athletic departments and went out of their way to support their teams while maintaining incredibly competitive marching bands.

Things I have learned from watching these programs as well as my own experiences at CTJ include: