Mentoring in Action — From the Mentee’s Perspective

Music education students face a unique challenge: We spend nearly a decade mastering our instruments, then choose to make the art of music-making a career. Then we spend four years in the safe halls of our colleges and universities, studying instrumental pedagogy and child psychology (occasionally wandering out for practicums), as we prepare for a profession that many agree is unable to be prepared for! Like bracing for the impact of a cannonball into a lake that we know is freezing, music education students are told that we will not know what teaching music is like until we are actually “in it.”

That adage was a cloud that grew darker as I neared graduation and joined the job hunt. As a chronic worrier and vigilant planner, I did what I could — such as reading books, teaching lessons and marching bands where I could and listening to hours of podcasts during my drives to and from school. One that I particularly enjoyed was “The Bandmasters Podcast,” hosted by Don Stinson, a recipient of two citations of excellence from the National Band Association, a two-time GRAMMY® Music Educator quarterfinalist and current Director of Bands at Joliet Central High School.

A few weeks after a chance encounter at the Music for All Summer Symposium with Dr. Dave Gerhart, the assistant marketing manager of educator for Yamaha, I received the unbelievable opportunity to meet Don and have a chat about my worries — a literal dream come true!

The discussion between Don and me had a general topic: The typical worries, questions and fears of a soon-to-be first-year teacher, and the answers that a veteran teacher could provide.

Before the Summer Symposium, I was offered a position as Director of Bands at John F. Kennedy Middle School in Plainfield, Illinois. In this position, I would teach over 150 6th-, 7th- and 8th-grade band students, as well as an additional 80 6th-grade general music students. As my future career path became clearer, I was excited — and terrified! When I called my mother to deliver the good news, she was naturally happy and impressed, but she verbalized the thought that had been heading to the forefront of my mind: “Are you qualified for this?”

When Don and I sat down at a coffee house, I was (in typical fashion) nervous while he was (in even more typical fashion, I came to learn) as calm as could be. He congratulated me on “the new gig,” and we proceeded to discuss some of our shared connections and experiences. I pulled up the list of questions that I had drafted — remember, I’m a vigilant planner! — and I dove into my biggest worry. I had heard from dozens of teachers that the first year of teaching is, in a word, terrible.

Don smiled and told me how it wasn’t awful, how it did not need to be awful, but he added that I would make mistakes.

Don recalled that at one of his first concerts as a real band director he forgot to list a student’s name on the program. Not an uncommon band director error, and certainly not the worst one someone can make in their first few years of teaching (much better than the stories I’ve heard of accidentally leaving a student behind on the spring break trip), but it was an error that the student’s parent did not take kindly to. Don knew this because he received a scathing email, complete with bold text, capital letters, underlines and numerous exclamation marks. His knee-jerk reaction was understandably defensive: How dare this parent talk to me like this? Don’t they realize how busy I am? It isn’t even that big of a deal! 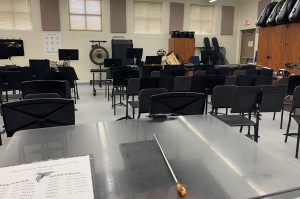 However, Don did the smart thing that many of us may have heard during our student-teaching: He waited. After taking some deep breaths and calming down, Don came to some realizations. Yes, he was busy, but the reality is that everyone’s busy! And this student was left off the program at a concert that he had worked hard for. The parent and child were upset, and nothing could change that. Don’s response was indicative of what I observed was at the core of his overall demeanor — honesty — and is one of the qualities that makes him a master educator.

A few hours later, a calmer Don wrote back to the parent. He didn’t bold or underline text, he didn’t use capital letters or a single exclamation mark. He was honest and communicative. He said that he felt terrible and that he would print another program that included the student’s name.

Don let the experience guide him — since that inadvertent omission, he always checks his programs with students — and became a better educator because of it.

As our conversation continued to flow naturally (no question sheet needed!), Don recounted more stories from his years of teaching that benefited from being honest with those around him. When he started a new job, he asked the students which traditions were meaningful to them. No drastic changes, just meeting the students where they were at and knowing what was important to them.

Or when he started feeling overwhelmed, he reached out to booster parents and asked for help. (Another Stinson lesson — if it doesn’t require a music degree, delegate!) Sure enough, they arrived in numbers, and he could focus on teaching music.

“But it’s not just the beginning of my career that I’m worried about.” I admitted to Don. “What if I end up burning out down the line? I’m seeing it everywhere!”

Don knew exactly what I was talking about — he had been there. While the “it’s okay to not be the last car in the parking lot” advice has become more common, it had more weight coming from Don. At the point when Don started feeling burnout, he had a family. Like most people, Don acknowledged that he needed to do more things outside of work, but he would never follow up.

His next two words caught me off guard: “Rock climbing.”

I wasn’t sure how to respond, so I just repeated those two words: “…rock climbing?”

Don explained that he would schedule an event in advance — whether it was rock climbing, going to the zoo with his children or taking a road trip — and would force himself to do it. He said that once you force yourself to simply do an activity instead of binge-watching a show, you end up enjoying it. He wanted to make a change to his work-life balance, so he added more “life” and stuck to it. He (and his family) have been happier because of it.

Too Blessed to be Stressed

As we reached the end of our time together, I asked Don the question that had been creeping into my mind based on what I had seen both in real life and on band director forums (he chuckled at that one): “Does your job stress you out?”

Without hesitation, Don said, “No.”

Admittedly, I was a bit surprised at his instant response, but he broke it down. Don had worked out what needed to be done at his job, how to prioritize it (he wrote this great article about) and when to go home. He recognized that he was teaching students he loved at the alma mater he cherished, and that he was glad to have the life he does. At that moment, I told him how much our talk had calmed me down. Throughout the numerous situations that Don recounted, he always remained honest, talked to people, asked for help and taken things one day at a time. We are all (or will be) music teachers, building meaningful connections through a medium we love. 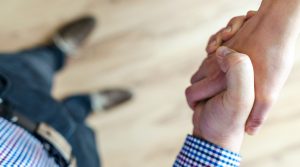 It’s easy to get caught up in the details, but Don Stinson’s practical advice and honesty made me feel better. Sure, right now I don’t know exactly how to do every aspect of my job, but there isn’t any podcast that can prepare me for that. I could only be sure that I would bring the openness and positive attitude that my students needed. At the Summer Symposium earlier that month, master teacher Alfred Watkins advised me that no matter what, students will come with joy in their hearts — it’s simply up to us to unleash it.

The last few weeks, I have attended countless induction and institute days. I’ve spent many hours in meetings preparing for things that don’t directly involve holding a baton and directing sound. As I learn about different assessment methods and new school rules, Don’s words — as well as words from the multitude of mentors that every young teacher needs — return to me when I begin to feel overwhelmed. I am able to remain calmer, even as the first day of school is days away.

From Don, I learned that there will eventually be a point where all of us young educators will feel confident and prepared. And while we may not be there yet, we can simply enjoy the moments we have, get to know our new students, and be ready to make mistakes and learn from them. In the meantime, while we’re still learning, we can focus on the things that matter — our students, the music, and, of course, double-checking our programs.

Read this article’s companion piece, Mentoring in Action — From the Mentor’s Perspective, by Don Stinson.