The Power of Words: The Enduring Effects of Arrows and Songs

A Longfellow poem and its moving message helped to reinforce the underlying foundation of the Forney High School band program.

“The Arrow and the Song” is a powerful poem that explores how we communicate with each other and the long-lasting effects these moments have on our lives. Longfellow’s poem resonates with me because it shows how some words stick with you and hurt you like the arrow, while other words build you up and are carried in your heart like a song. This message is so important and helpful to the daily operations of our program. Read further to see how much this simple poem impacted a group of students at Forney High School in Texas.

I shot an arrow into the air,
It fell to earth, I knew not where;
For, so swiftly it flew, the sight
Could not follow it in its flight.

I breathed a song into the air,
It fell to earth, I knew not where;
For who has sight so keen and strong,
That it can follow the flight of song?

Long, long afterward, in an oak
I found the arrow, still unbroke;
And the song, from beginning to end,
I found again in the heart of a friend.

— The Arrow and The Song (1845) by Henry Wadsworth Longfellow

Be Aware of Your Words 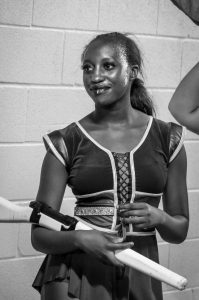 How do our words truly affect others? Each day, we take part in dozens of conversions with our students, coworkers, family members and others. As music educators, we are tasked with communicating with our students throughout the day, and for many of us, we have the opportunity to have a continuing conversation for years before our students graduate from our programs and head out into the world.

Now let us look more closely at the words themselves. Are our words, our daily instruction, truly building our students into the people we want them to be? It is vitally important to realize that each one of our students has a self-image that is being molded and shaped by the interactions they have each day, and most notably, the interactions they are having with you!

My great friend, author and Olympian, Lanny Bassham, describes the self-image of a person as the sum total of their habits, attitudes and beliefs. It’s why they are the way they are and oftentimes, why they do what they do. This self-image is shaped daily by the experiences and words of people around them.

As music educators, we are great at developing relationships with our students. Just attend a high school reunion and you will see all the music people on one side of the room reminiscing about the great times they had with their directors and friends. It’s an impactful profession we have!

Now let’s own the weight of our words and take ownership of the incredible power we have to shape the self-image of our students for the better. Here are some practical tools that you can employ TODAY to check your language that shapes your students’ self-image. For anyone who has played golf, consider this analogy: You are standing at the tee on the first hole looking down a beautiful green fairway, and down the right side of the fairway is a giant, glistening blue lake just calling to your golf ball. The last thing you think before you hit the shot is, of course, “DON’T hit it in the water!”

For example, you are working with a young clarinet player whose chin is moving while playing. Instead of saying, “Don’t move your chin,” tell the student, “Can you focus on keeping your chin very still?” Paint the image in the mind of the listener of the desired outcome instead of the result not desired!

Have you ever had anyone give you a compliment followed by the word “but” and then a criticism? If you are anything like me or my students, once the word “but” enters the equation, all the complimentary material before the “but” is erased and all you can think about is the criticism.

Erase that word from your vocabulary! Instead, replace it with action words like “now can you,” “will you,” “try this,” etc. These words paint a totally different picture in your students’ minds and creates a feeling of “I have been successful so far, now I can try this next step to be more successful!” Have you ever had a great performance? Of course — it feels wonderful to perform at your best!

Have you or your students had a poor performance? Of course — it’s part of being human.

You must always remember that your students desperately want to please you, their peers and the organization. After a subpar performance, it’s easy for them to immediately begin beating themselves up. We’ve all been there. In fact, it’s unfortunately a habit for many of us — as soon as things don’t go right, we beat ourselves up! This causes so much damage, and long-term negative effects will ensue.

Try this helpful strategy to help shape the self-image of your students immediately following a performance: Have a post-performance talk, emphasizing the things that went well, the things that we all learned together, and what we’re going to do about it as an organization. This conversation in and of itself is very helpful and will give you an opportunity as their educator to shape the direction of their minds going forward.

The next important step is to ask students to rate their individual execution/performance into a few categories:

Those who find themselves in the first two categories should focus on how much fun they had while performing and live in that moment with their friends.

Those who are in the “needs work” category are the focus in this whole exercise. Many of these students would have, had you not intervened, held that hurt inside and began beating themselves up focusing on their mistakes instead of the solutions. This internal battering often turns into more mistakes and further damage to their self-image.

Take an opportunity to meet with each of these students and coach them through their perceived shortcomings and provide them with a customized plan for improvement. Now the student is focused on the solution instead of the problem. They are focused on their own ability to improve instead of internally telling themselves they have failed. What a powerful tool this is! Employ this technique after your next performance.

It may take a few tries before the “needs-work” students have the courage to come to you, so I always tell the whole group that I am most proud of these students for their honesty and selflessness. After they do well in the next performance, I make sure to praise them in front of the group to continue building that self-image.

When Longfellow wrote “The Arrow and the Song,” I doubt he would have ever dreamed of the impact his poem would have on a marching band in Texas. In fact, it has impacted us so much, we created a marching show about it! Truly what better material to surround our students with than a realization that the words they say to each other can be either “arrows” that hurt people for years to come, or they can be “songs,” powerful words that build up the self-image of each other.

Longfellow put it most eloquently in the final lines of his poem: “And the song, from beginning to end / I found again in the heart of a friend.”

Use your words wisely — be the song!