Pedals, and how to use them.

Many years ago I was presenting a workshop entitled “The Power of Strings: Plugging In!” at a statewide music educators conference. The participants were all music teachers who had never played electric string instruments but were either planning to purchase some for their schools, were simply curious … or, in one case, outright skeptical.

I started off by displaying the chart below and described the setup I’d brought with me, which consisted of my 5-string electric Yamaha violin, plugged into several effects pedals, similar to those used by electric guitarists. I demonstrated plugging in to both a single instrument amp as well as going through a complete PA system with two speakers. 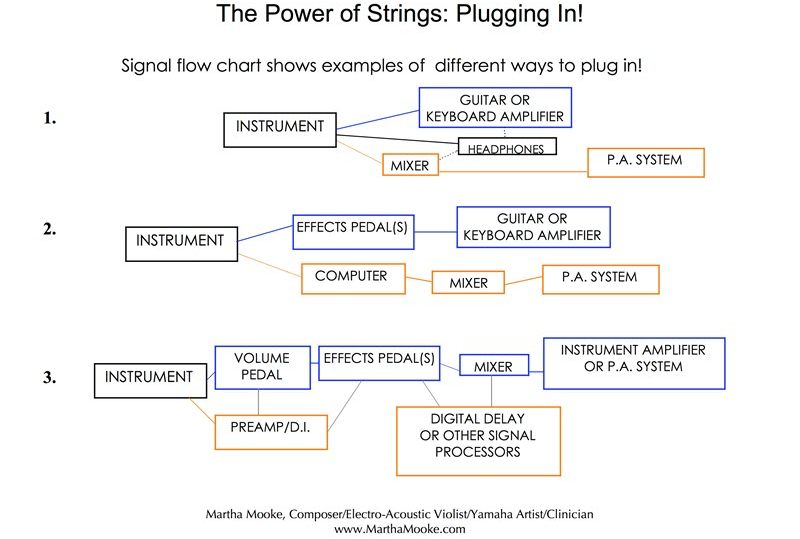 Then I played some of my original music (I started out as an improviser and eventually became a composer so I would have something to play on my electric viola!) while pointing out the different effects and techniques I use to achieve the sounds that make it seem like I have a whole ensemble playing with me.

Here’s some background, before I get to the fun part of the story:

There are many kinds of pedals, some of which have a single effect. Digital delay, for example, creates a delayed playback of your original note — kind of like an echo, only you can adjust the length and number of repeats. Reverb, which changes the ambience (from playing in your living room, for example, to playing in Carnegie Hall) is another common effect, as is a pitch shifter (which adds harmonies, changes octaves, etc.). Other effects, like flange, wah or chorus add a modified signal to the original, resulting in different textures; allowing you to do things like creating a “wah-wah” effect similar to a trumpet player using a mute to cover and uncover the bell.

What kind of effects you use and how you use them are a matter of personal (and practical) preference. For my composing and performing, I usually use several effects at the same time. For that reason, I employ what are called “multi-effects” pedals that allow me to control the different settings (parameters) of multiple effects. I also use a “looper” pedal that allows me to record a phrase or idea on the spot, play it back, add layers on top of the original “loop” and then continue playing over the loop and layers.

For those just starting out, I suggest getting a couple of single effect pedals. Plug your instrument into one, then into the other, then into an amp (this is called a signal chain). Experiment with the sounds, create rhythms, make up strange or exotic melodies and harmonies. Then switch the order of the pedals and see (or, more accurately, hear) what happens!

Okay, back to my story:

During my presentation, I demonstrated my setup using several electric instruments (including 4- and 5-string electric violins — the latter being my personal favorite), and explained how I use the different pedals to change sounds (adding delays, reverb, pitch, etc.) and to create rhythms, textures, harmonies and loops.

Some of the teachers asked questions such as: “What repertoire can the students play with this kind of setup?” Well, try playing Bach or Mozart through a distortion pedal with some digital delay and see what happens! In fact, any kind of music can be played through pedals. It’s also a great opportunity for the students to make things up (i.e., improvise) and create their own original music.

Towards the end of the workshop, I set up “playstations” in each corner of the room where the teachers could plug in (there were electric violins, a viola and a cello) and try it out for themselves. Each station had one effects pedal, and headphones were plugged into an amp or mixer, which kept the overall sound level down and also gave the players the freedom to try different things out without feeling self-conscious.

All but one of the teachers eagerly headed for a “playstation.” When I asked the lone holdout why she didn’t even want to try it out, she said she wasn’t “buying it,” that she didn’t see any purpose. After assuring her that she would not go deaf (tip: always start with the volume down on headphones or speakers and gradually turn up the knob) and that no one would know whether she stepped on a pedal or just played a Bach cello suite without any effects, she went and sat down and started playing. A minute or two later I went to check on her and saw that she had a big smile on her face as she swayed and tapped her feet. I don’t know which effect(s) she tried, but I’m pretty sure after that, she “bought it”!