This three-part series of articles will touch on topics that will help you achieve your goal of creating the perfect audio system — what we call “Ultra Hi-Fi.” The first of these is about tonearms. But before we get to that, let’s cover some turntable basics.

A turntable consists of the following components:

– A platter that rotates via a belt drive or direct drive.

– A slip mat that rests on top of the platter (which acts as the cushion between the record and platter). 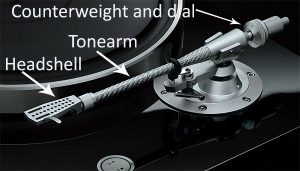 – A tonearm, which rests on a pivoting fulcrum, back-ended by a counterweight and front-ended by a headshell that houses the phono cartridge.

When a needle is dropped onto a record, it generates a tiny electrical signal that is equivalent to (i.e., an analog of) the dynamic content in the bottom of the grooves that represent recorded music. The cleaner the record, the better chance you have to capture every detail of the music. (Click here to learn more about how to clean your vinyl collection.)

If you’re a person who collect records to experience music as the artist intended, you need to pay particular attention to the tonearm you’re using. The main function of the tonearm is to keep the cartridge in a steady position as the record spins, at the same time allowing it to be flexible enough to move inward to the middle of the record while keeping the needle centered in the groove.

This is where the shape of the tonearm comes in. Here are the three standard types of tonearms and how they impact turntable performance:

There are short and long straight tonearms available. The longer ones rely on an anti-skate mechanism to counteract the inward frictional forces caused by the spiral on the disc. This adds complexity and mass to the tonearm mechanism itself.

A short straight tonearm has less mass and can respond nimbly to pull more musicality from the groove of the record. In addition, its geometry requires no anti-skate mechanism to counter the inward forces, as is utilized in longer straight tonearms. In theory, the shorter the arm, the less chance for vibration and thus the greater the stability. As an example, the Yamaha GT-5000 turntable features a short tonearm and an oversized platter.

Though nearly the same as a straight tonearm, this variation has the headshell jetting out to the right (towards the center of the record), giving it a characteristic “J” shape. The purpose of the angled headshell is to let a longer arm fit into a smaller space, which reduces the possibility of tracking errors as the record plays.

This kind of design also provides extra weight to the arm, which keeps vertical momentum to a minimum and prevents the stylus from bouncing out of the groove.

The S Type is designed to keep the tonearm balanced horizontally, adding more protection from the variables of a wobbly disk, a vibrating chassis and tracking errors. The intent is to create a fulcrum point in the middle of the tonearm, balancing the needle so it rests more in the center of the groove, which in turn allows it to capture as much audio as possible.

Having a tonearm that is the right amount of flexible and firm is paramount to a smooth audio performance. With so many different turntables on the market, from entry-level to luxury, some research may be required to determine the unit that will best suit your needs. Here’s a tip: Visiting stores in person will allow you to test out different tonearms and hear the sonic difference they make.

Read Part 2 of our Ultra Hi-Fi series of blog postings: The Difference Made by Speaker Driver Materials

Also check out these related postings:

How to Connect a Turntable to an AV Receiver

Appreciating Vinyl Records … and the Best Way to Enjoy Them

Back to Bassics: A Bassist’s Guide to Compression
Timpani Maintenance