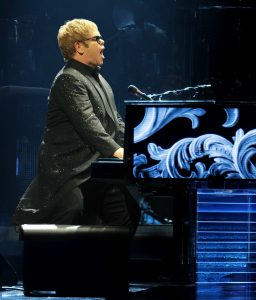 When the dust has settled and the history of 20th and 21st century pop music has been written, there’s no doubt that Yamaha Artist Elton John will go down as one of the most influential artists and composers of the era. His catalog of recordings spans fifty years and counting, and includes 33 studio albums, 120-plus singles, eight soundtracks, and more than a dozen compilations, combining for sales of more than 200 million units worldwide. More importantly, the man has given us some amazing songs. Here are my top ten picks, in chronological order.

A great story about an astronaut who’s homesick, “Rocket Man” features tasty instrumental and vocal contributions from Elton’s backing band of the era (guitarist Davey Johnstone, bassist Dee Murray and drummer Nigel Olsson), all wrapped in a stunning production by Gus Dudgeon. Check out the shimmering acoustic and slide guitars in the chorus, and the way the reverb on the lead vocal subtly grows in intensity as the song fades on “I think it’s gonna be a long, long time …” Listen here.

Elton’s performance is both understated and fragile in this atmospheric song about a returning Vietnam war veteran coping with a disability and seeking anonymity. It’s also one of the few EJ recordings in which he plays an electric piano as opposed to an acoustic piano. Listen here.

Imagine the nerve of a pop artist opening an album with an instrumental that’s almost six minutes long! With its spooky synth effects, it starts like the soundtrack to a horror movie, but just when you’re not sure where this epic track is headed, the band segues into the rocker “Love Lies Bleeding,” providing a hint of what’s to come on the masterpiece that is Goodbye Yellow Brick Road. Listen here.

If this song doesn’t get your adrenaline pumping, you might want to see a doctor. The band revs up pretty hard on this one, which has been a staple of FM radio since its release. Elton spits out the aggressive lyrics with a serious dose of attitude, accompanied by rapid-fire piano playing that might have left the keys smoldering. Listen here.

This may be one of the lesser-known EJ songs, but it kicks butt right from the count-off, with an uplifting chorus and a pumping bass that somehow never gets in the way of the piano. Listen here.

This iconic ballad begins with just piano and a ticking hi-hat supporting the heartfelt vocal. Tension builds through the first verse until the whole band kicks in on the chorus, with lush backing vocals that wouldn’t be out of place on a Beach Boys album — not surprising given that they’re supplied by, among others, Carl Wilson and Bruce Johnston. When Elton sings “These cuts I have, they need love to help them heal” in the last verse, there’s not a dry eye in the house. Listen here.

A heart-wrenching tale of a disturbed youth who goes off the rails, Elton’s exquisite rendering of this hidden gem alternates between quiet desperation and rage. The bare-bones arrangement consists almost entirely of voice and piano, supplemented by a touch of synth that builds to a powerful climax as the song ends. Listen here.

8. “Someone Saved My Life Tonight” from Captain Fantastic and The Brown Dirt Cowboy, 1975

When this nearly seven-minute track was released, the record company wanted to edit it down to a radio-friendly length, but EJ wasn’t having it. Good for him, because it became a hit anyway, and good for us since we all got to hear every emotional note of this amazing song. The slowly building dynamics and the desperation heard in Elton’s voice when he sings “Thank God my music’s still alive” still make the hairs on the back of my neck stand up every time I hear it. Listen here.

This song is heavy, not so much because of the instrumentation but because of the combination of the message — a testimony to the power of love — and Elton’s defiant performance. Yes, the snare sound may be a bit dated, but the rest of the production’s big-ness stands up well. Listen here.

This album may not have been EJ’s best-known, but there’s not a bad song in the bunch, with this one being the standout for me. It has the vibe of a track that could have been on his 1969 debut album Madman Across The Water, yet it still sounds contemporary. Listen here.

Put on a great pair of headphones or listen through a quality audio system to best appreciate these masterpieces. No doubt you’ll come up with some favorites of your own!

The Well-Rounded Keyboardist: The Basics Of Chordal Harmony
Top Ten Tips for Livestreaming Your Music