How to Shop for a Subwoofer

Get ready to rumble.

Subwoofers are speakers with a singular, but important job: to reproduce the ultra-low bass frequencies that standard speakers can’t handle. They’ve been around since the 1960s, but came into their own with the wide use of cinematic surround sound in the ’80s and ’90s. If you want to hear (or, more accurately, feel) the impact of sound effects while watching a big-budget action film at home the same way you experience them in a movie theater, you need a subwoofer. And if you listen to a lot of contemporary pop, hip-hop and EDM, a sub is essential to capture that music’s full club-shaking punch.

A Question of Size

Before making an investment in a subwoofer, it helps to have a sense of how much physical space you want it to take up. Don’t assume that bigger automatically means better. In fact, developments in speaker technology have made it possible for relatively tiny subwoofers to achieve powerful lows. Yes, a twelve-inch speaker cone can push more air than an 8-inch one, but that doesn’t matter so much if it isn’t pumping out the right frequencies (see below). 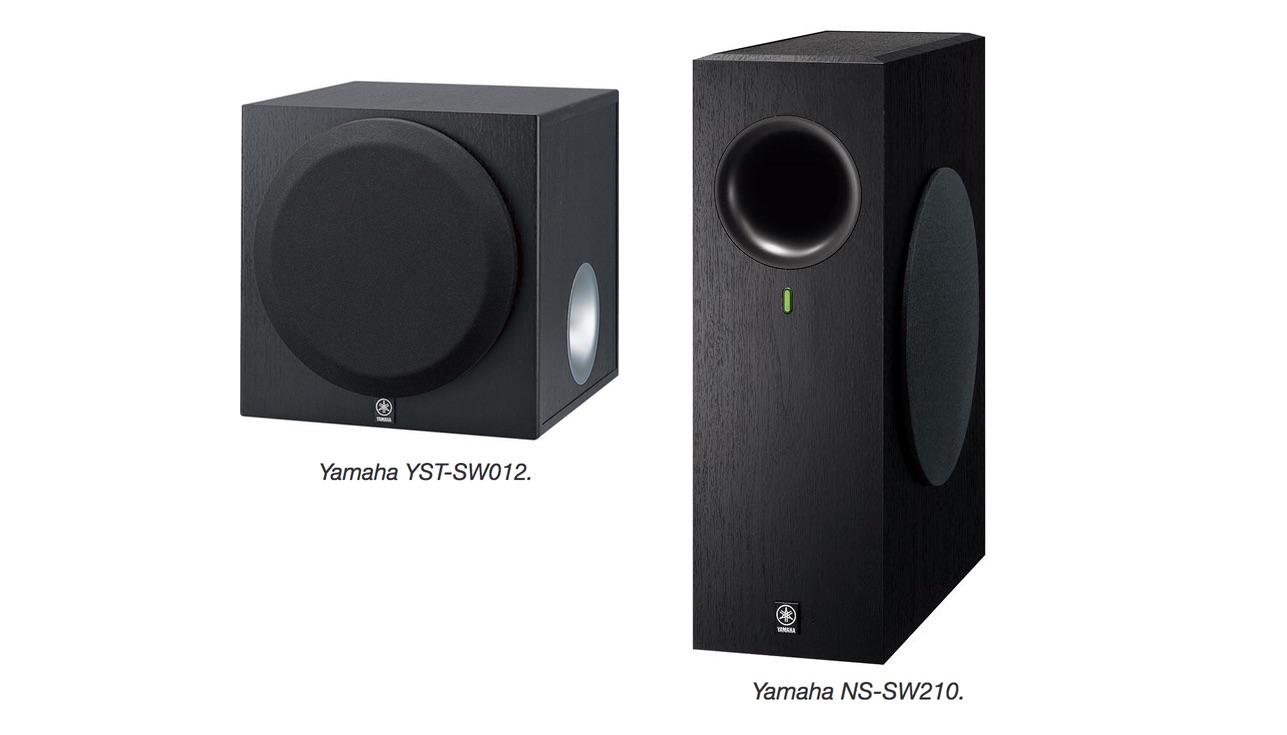 Most Yamaha subwoofers are either square or rectangular and horizontally, rather than vertically, oriented. One exception is the NS-SW210, which has a tall, thin profile (6½” wide by 17¾” high) that can match up well with certain types of flat screens.

Once you’ve gotten past size and shape issues, the biggest thing to consider when shopping for a sub is frequency response. A particularly important point to bear in mind is something called the crossover frequency — essentially, a kind of borderline that indicates where low frequencies stop being handled by your regular speakers and start being produced by the subwoofer. The most common crossover setting on an A/V receiver is 80 Hz, but generally speaking, the bigger the woofers are on your regular speakers, the lower the crossover point should be for your subwoofer. If you engage all your speakers (including the sub) and hear plenty of lows but can’t tell exactly where they’re coming from, you’ve got yourself a successful crossover.

Every Yamaha subwoofer has a broad enough frequency range to set the crossover wherever you feel most comfortable. The model with the widest range overall is the NS-SW050, which delivers frequencies from 28 Hz to 200 Hz. If you want your sub to hit absolute bottom, you may want to consider the NS-SW1000, which is powered by a 1,000-watt amplifier and can reach depths of 18 Hz, which is about as low as is possible for a human to hear.

One Sub or Two?

Some home theater receivers, including many made by Yamaha, allow for the use of two subwoofers. Depending on the amount of additional speakers you have, this would make your system 5.2 (the number after the decimal place indicates how many subs there are), 7.2, 9.2 or even 11.2.

Left/right separation isn’t really a factor when it comes to low frequencies, so there’s no specific need to have two subwoofers; in fact, both subs in a “.2” system will generally be putting out exactly the same signal. That said, sometimes more is more, and having one sub behind you and another one in front can make for a truly bone-rattling experience! Just make sure that the two subs are not firing directly at one another (which can cause phase cancellations that reduce their effectiveness) and that they are working with one another as well as they do with the other speakers in your system. If one sub sounds noticeably different from — or louder than — the other, it can spoil what you’re going for: that glorious feeling you get when you’ve been catapulted right into the middle of a whole world of sound.

It’s also worth considering any special features that a subwoofer may have. For instance, most subs on the market today have a port (a hole cut into the cabinet that helps increase the speaker’s ability to respond to low frequencies). But the Yamaha NS-SW series features a unique design called Twisted Flare Port, which — as its name suggests — has a gently twisting shape that creates a smooth air flow around the port edge, allowing those lows to ring out even clearer. (Rather counterintuitively, a standard circular port has a more turbulent air flow.)

In addition, all Yamaha subwoofers utilize something called Advanced YST II. YST stands for Yamaha Active Servo Technology, and at its heart are negative-impedance converters. Without getting too technical here, we’ll simply say that in certain electrical devices, negative impedance can amplify a signal. Obviously, this is an important trait for speakers, and Yamaha’s ANIC (Advanced Negative Impedance Converter) circuitry ensures that sub-bass frequencies are replicated with consistent accuracy.

Once you’ve purchased a subwoofer, where do you put it? First of all, subwoofers are commonly placed on the ground to help convey the feeling that those deep lows are emanating from your floor (and potentially rattling it as well — a good thing, assuming you don’t live in an apartment).

In terms of positioning, most people tend to put their subwoofer somewhere in the middle of the stereo soundstage — that is, in-between the front left and front right speakers (though you’ll get best results if it’s a little off-center). But this practice isn’t one you need to follow, since low frequencies are pretty much unidirectional, meaning that you generally can’t tell where they’re coming from. In fact, the optimum location for a subwoofer in any environment depends mostly upon the room dimensions. The key to its successful placement is that its location not be apparent. If you’re able to perceive the direction that the low frequencies are coming from, that’s a sure sign that the sub is not positioned correctly.

Last but not least, if the subwoofer provides a phase switch, experiment with different settings until the smoothest bass response is heard. If it does not have such a switch, try rotating the sub in 90-degree increments until it sounds best. In certain circumstances, you’ll find that not having it face directly at you yields the best sonic results.