Songwriting Without a Safety Net

Once lost, never to be found.

“What was that melody I just sang?” I ask myself in a panic. You know, that hooky little bit I can not repeat. Well, I can sort of repeat it … but not quite. And we all know it’s the “quite” that matters.

Like it says in the title of a song I once wrote (“Almost Doesn’t Count”), similar is not the same. It was something about that particular, peculiar bit — that je ne sais quoi — that shall never come again.

I have to face it. It’s — GONE! Headed for the great abyss to join all the other magical melodies, chord progressions and guitar licks that have escaped because:

THE MIC WASN’T ON.

I’ve made this mistake before. When will I learn? 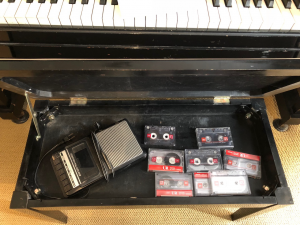 No getting around it: I’ll have to start from scratch. And that’s a shame because it didn’t have to be this way. I’d have a killer hook If Only: If only the mic was open, or the voice memo was activated or — for those of us with analog hearts — that portable cassette player was in Record. (Mine is hidden in my piano bench because I don’t want my younger collaborators to see it.) It’s a regrettable faux pas that might be the difference between an unmemorable writing session and a creative experience that could change my life … not to mention the size of my bank account.

So what’s my excuse for resisting this simple prerequisite to a productive writing session? I actually have three:

1. There’s a superstitious voice in my head that believes once I make a conscious decision to press Record, I’m signaling to the Universe that there’s an expectation that something remarkable could happen. The problem is, the Universe doesn’t like when I presume anything. It wants to surprise me — to be in control. It wants to give me a gift I don’t expect to receive. Apparently, that’s what brings the Universe joy. And power. So if it witnesses me taking steps to catch the magic, it won’t bestow me with any. 🙁

2. Knowing I’m being documented makes me self-conscious. I feel a pressure to be brilliant. To perform. To be on my game. I do not want to disappoint anyone in the room. So I play it safe, coloring within the lines. And we all know it’s stream-of-consciousness — that un-calculated, disorganized madness — from which magic descends.

3. Once I acknowledge there was something pretty special a ways back, then I have to locate it. But did it happen before I ordered lunch? After I Googled Lady Gaga? I could be rewinding and fast forwarding for days. And then I’m already down the rabbit hole — committed to retrieval and analysis. Sometimes I find the bit. Sometimes I don’t. Sometimes it wasn’t as good as I thought it was and now I’ve wasted a whole lot of time and taken myself out of the moment. And I might not be able to get back in. Ugh.

But the fact is that none of the above are good enough excuses, because there’s too much at stake. So I’ve been trying to embrace the idea that documentation is a responsibility — an automatic precursor to any creative endeavor. Just like seatbelts before driving, a napkin on a lap. It’s insurance — protection against loss or damage of something valuable. A necessary inconvenience. And once I make a habit of it, I’ll start forgetting that the computer or smartphone or cassette recorder is running, which is a good thing.

You might say, “But what about all those untitled new recordings cluttering up my voice memo queue?” Well, that’s what air travel is for. Get yourself a cocktail, pop in the ear buds and get busy. Delete. Delete. Delete. Or maybe you’ll hear something you forgot about completely — that cool little ditty you dictated at a red light. It’s a “start” you can bring to your session tomorrow. Awesome!

There’s a curious balance in life between the things we lose (lightning in a bottle, sunglasses, car keys) and the things we find (those earrings, a letter from my father, that long-forgotten voice memo). I’m trying to be more forgiving with myself when things disappear. After all, there’s a lot on our multi-tasking minds. That said, with a little more care, there are losses we can prevent. If we’re more mindful we will surely lose less.

Now go to it. And don’t forget to press Record!