How to Bore an Audience

Ready to turn those cheers into tears? Here are six ways to turn a lovefest into a snoozefest.

I recently attended a concert by a somewhat famous guitarist of the 60s/70s who shall not be named for reasons that will soon become obvious. I had never seen this particular musician in live performance before but have enjoyed many of his recordings over the years and appreciate his obvious mastery of the instrument, so I was looking forward to the evening.

It did not turn out well. And, judging from the smattering of applause coming from the audience after every song, I wasn’t alone in my assessment. 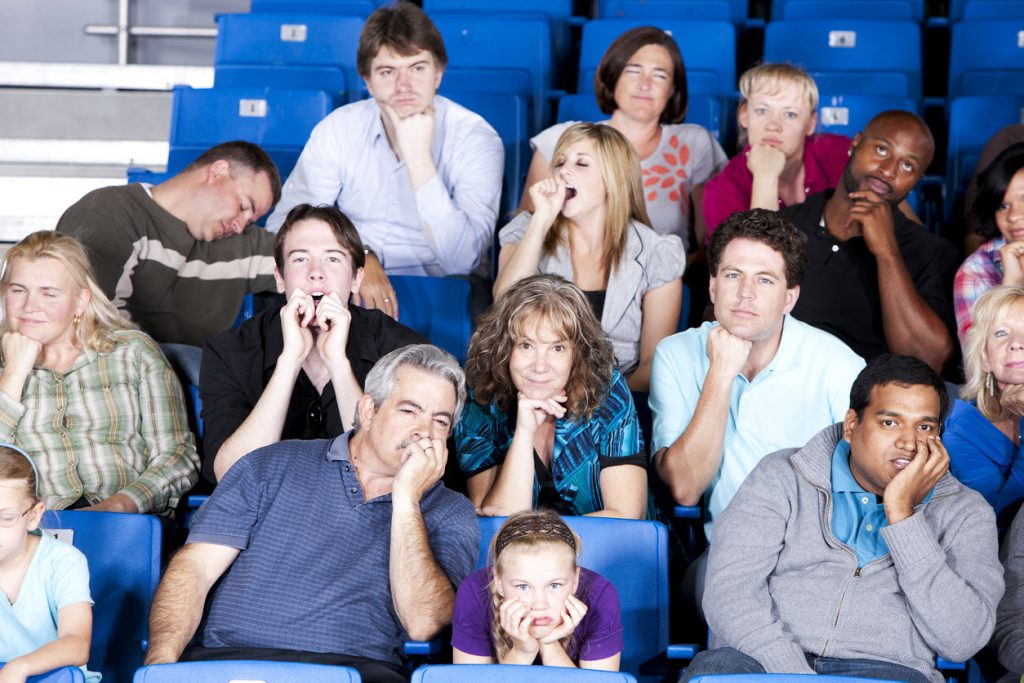 The reasons are almost too many to list, but I’ll try. Too loud. No stage presence. Self-indulgent. Uninteresting songs. Lack of tonal variety. Dreary tempos. A poor sound mix.

They say that every cloud has a silver lining, though, and I guess the upside of my having been there (three hours of my life down the drain, just like that!) is what I learned from the experience. So here now, without further ado, are Six Easy Steps to Boring Your Audience to Tears:

1.  Play for yourself, and no one else. Love that little lick you stumbled upon while tuning up backstage? Play it. Then play it again. And again. And again and again andagainandagainandagain, as many times as you like. Change a single note if you must. Try it an octave higher, or in a different key. But then go back to playing it again. And if you’re happy with your sound, keep using that sound. Use it all night long. Even if it’s too loud or too piercing or too overpowering or too whatever. Find your tone and stick with it, no matter what the song calls for. Who says variety is the spice of life?

2. Disengage. From your audience, from your backing band, your manager, your fiancée, whoever. Stage patter is for sissies. Maybe mumble a “thank you very much” into your mic every now and then like you don’t mean it. Rock-star grimaces (the “constipated duck” look) are allowable, but don’t ever smile, don’t ever look like you’re having any fun, and above all never exchange glances with your fellow musicians onstage — it will only encourage them.

3. Keep the music to a minimum. Hummable melodies are overrated. Ditto interesting chord changes. Go for monotone instead — it makes the jamming easier, and, after all, everyone is here to revel in your abilities to improvise over a basic I-IV-V blues progression, right? Wouldn’t want to confuse them with anything more than that.

4. Get loud. If that doesn’t work, get louder. Makes it easier to get your message across … if your message is “I couldn’t care less.” The crowd still not responding? Crank it up even more. Yeah, that’ll teach ’em.

5. Slow it down. Alternate the tempo of the songs in your set list between slow and funereal. Anything faster than that could cause the audience’s hearts to start pumping, which might, you know, wake them up or something.

6. Make sure your instrument is heard … even at the expense of everything else. Every note, every riff, every scrape of the pick against a string, every nudge of the whammy bar —  that’s all that counts. Vocals? Nah. (Who cares about lyrics, anyway?) Bass? Shouldn’t be anything more than a distant rumble. Drums? Just enough to pick up the backbeat. Keyboards? Horns? Fuggettaboudit. Instruct your sound guy carefully in these fundamentals; tell him to gaffer tape your fader up and the band’s faders down if necessary. After all, the punters in the seats came to hear you play, not those other guys.

Honestly, I mean no disrespect to this particular artist. He may be the nicest guy in the world (and I have it on good authority that he is indeed pleasant to work with), but at least at this one concert, he showed a distinct lack of regard for his audience. Worse yet, he exhibited no particular interest in entertaining them. To me, that’s a cardinal sin for any performer, regardless of genre.

So next time you hit the stage, keep these tips in mind … and do all you can to avoid repeating any of them.