The Benefits Of Collaboration

Sometimes one plus one can equal three.

It’s fun to sit down at your keyboard or strap on your guitar and create music by yourself, and it’s sometimes really important to work strictly on your own, especially when it comes to honing your craft. But one of the great things about music is that you it also allows you to collaborate with others in order to take your creations to a whole new place. 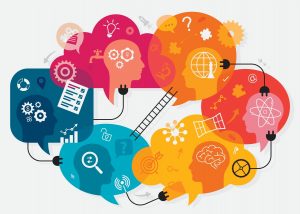 The word collaborate is defined by Merriam-Webster as “to work jointly with others, especially in an intellectual endeavor.” But this only touches the surface of what collaboration really is. Especially when it comes to music, collaboration is actually a healthy blend of skill, knowledge, psychology, personality, trust, talent, vision and the ability to envision what the end result could (and should) be.

In my line of work, I often collaborate with others. I do so for a variety of reasons, from the sheer fun of it to discovering something that might not have occurred to me if I were working alone. Along the way, I have found that one of the most important factors is being able to go into any collaboration with an open mind. You also must take into consideration the psyche of the person or people sitting across from you, and ascertain if they are taking the same approach as you, or a different one. Are they defensive when their ideas are questioned or changed? Do they welcome your ideas as much as you welcome theirs? Do they also have an end goal in mind that you should both be fighting for? These are all important clues as to whether the collaboration is working.

You also have to not be defensive or selfish about your own skills. I recently worked on a collection of emotive guitar cues with Ian Hatton — a well-seasoned guitarist who has worked with the likes of Robert Plant, Paul Rodgers and Jason Bonham. When I compose for TV, I normally do so on guitar, because that’s the foundation of my skill set. But I have an open enough mind to welcome working with another guitar player— someone who will bring to the table a variety of ideas, licks, phrases, parts and even instruments that I don’t have. So for this particular project I set my guitar playing aside and put on my other hats — that of composer, engineer, mixer and collaborator. Even though Ian handled all the guitar duties, I was able to create rhythmic loops as well as play bass, keys and percussion, in addition to using my mixing skills to pull it all together. Our open-minded collaboration yielded such great results that we are already working on several other projects together!

Collaboration can also be enhanced by a healthy sense of competition. In an article entitled How Lennon and McCartney Used Collaboration and Competition to Create Genius, author Dave Clark makes some interesting points. “[Lennon and McCartney’s] collaborative genius can be seen in what many consider to be The Beatles greatest song, A Day In The Life,” he writes, “where both members came to the table with parts of incomplete songs. While vastly different in musical composition, the pair fused these parts together to create an epic masterpiece that defines their greatness.”

Clark also refers to the writing of the psychedelic song Lucy in the Sky with Diamonds, where, he points out, the duo “volleyed” lines back and forth, “coming up with ideas with ease, creating the definition of a true collaboration.”

But, he adds, competition also drove the pair. “During The Beatles’ heyday, when everything the [pair] wrote became a hit,” he explains, “they began to write significant parts of songs, or even entire songs, on their own. When John appeared in the studio one day with Strawberry Fields Forever, a melancholy reflection of his childhood, Paul immediately answered with Penny Lane; an interpretation of his childhood. Always trying to “one-up” each other, the pair kept raising the stakes on what it meant to write a great song. Because of this, the songs kept getting better all the time.”

So approach any collaboration with an open mind, and be willing to consider all possible ideas that may result, regardless of where they may come from. Don’t immediately discard an idea coming from your collaborator even if you may not like it. Instead, ask yourself what you can combine with their idea to create something you might not have thought of on your own. Don’t worry about who writes this part or that, and don’t fret about how much each person contributes overall. Remember, it’s the music that counts, not anyone’s ego. Think big picture, and you’ll find that sometimes one plus one equals three!