If you’re just coming to this realization the hard way — i.e., you bought your loved one an electric guitar but neglected to get an amp to go along with it — don’t worry. You’re not the first person to make such an error, and it can be easily remedied. All you have to do is find a good amplifier to add to the equation.

Doing this may seem a little intimidating if you’re a newbie, but choosing a suitable amp is actually not all that difficult. The main reason is the rise of something called “digital modeling technology,” which convincingly imitates the tonal properties of a wide variety of amp types. In other words, these days, pretty much any guitar amp can sound like pretty much any other guitar amp.

So really, the main questions you need to ask yourself concern size and power output (the latter is measured in wattage). Your principal choice will be between smaller “desktop” amps and larger (but not necessarily huge) “traditional” models — though in many cases the most traditional thing about those will be their size and shape.

Just to be clear, a desktop amp has nothing to do with the virtual desktop on your computer; it’s not a piece of software and in fact there’s nothing virtual about it. These are actual amplifiers that are small enough to fit on an actual desktop. Take the Yamaha THR10II, for example. It’s just over 7 inches high, 14½ inches wide and 5½ inches deep. There are two different varieties of the THR10II (one has a built-in wireless receiver) but both come with dual 3-inch speakers and put out 20 watts of power — more than enough for learning purposes. Perhaps even more importantly, both have auxiliary inputs and Bluetooth® capability (so they can be used with smartphones, tablets and other music players) as well as headphone outputs so your child can practice to their favorite music in complete privacy … and without disturbing you, other family members, or the neighbors.

Obviously, desktop amps are perfect for practicing at home, but with the THR10II Wireless and larger, 30-watt THR30II Wireless models in particular, your child can practice pretty much anywhere, since they run both on AC power and on batteries. What’s more, their use of VCM (Virtual Circuitry Modeling) means that they can produce a range of sounds much bigger than they are. There are multiple amp tones to choose from, each offering a different amount and/or type of distortion — plus settings for bass, acoustic guitar and other instruments. Add two distinct effects circuits, one for modulation effects (chorus, flanging, etc.) and one for delays and reverbs, and you’ve got an amp that sounds great right out of the box. But if your child is not satisfied with the presets, he or she can download free THR Remote editor software (available for both iOS and Android® devices) which will allow them to tweak those amp tones and effects to their heart’s content.

Another nifty feature of THR-II amps is that they provide an integrated USB port and come with a bundled copy of Cubase AI software, making it easy to take the sound coming out of the amp and turn it into digital audio — going from an actual desktop to a virtual one. 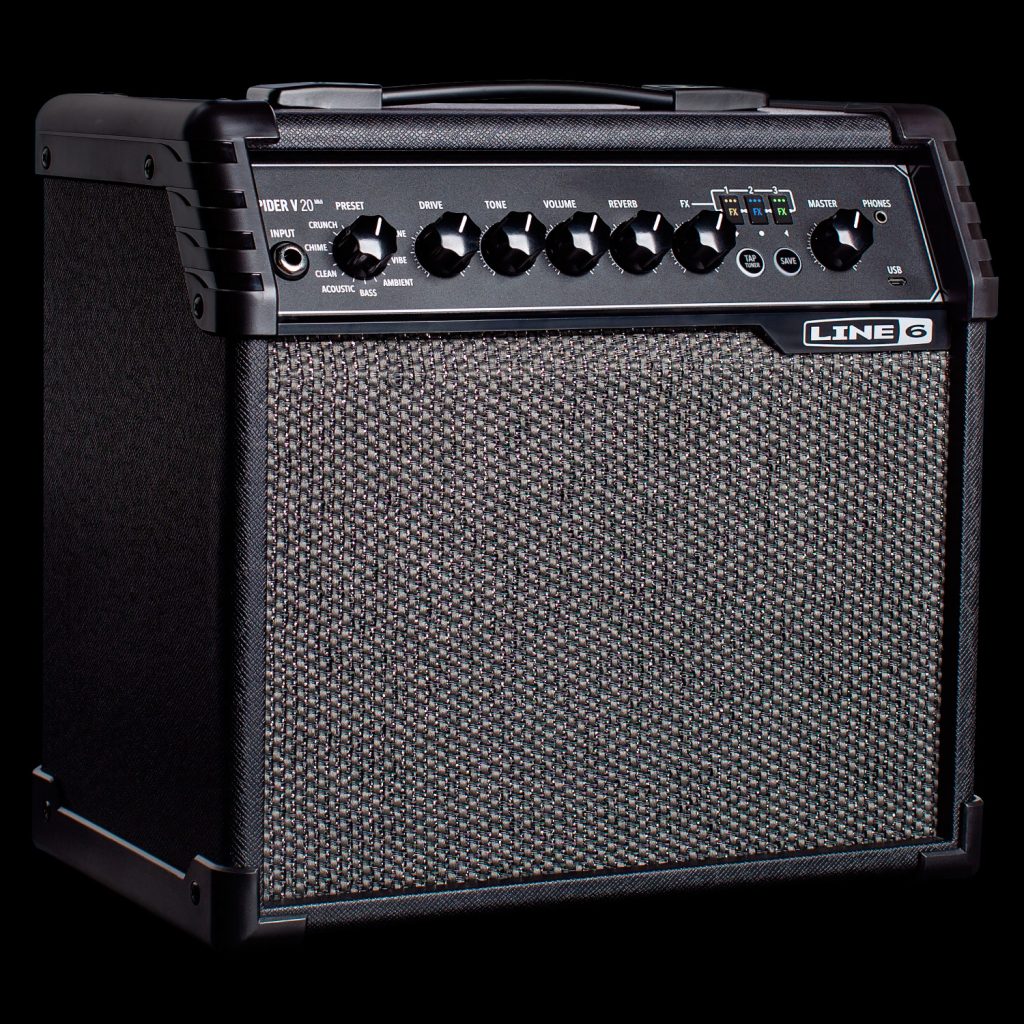 You wouldn’t want to try putting most traditional guitar amplifiers on a typical desktop, and none of them run on batteries. But just as modeling technology has raised the potential of desktop amps, it’s also made a huge difference in what the so-called “traditional” amp can do. Line 6 is a company that has long been a leader in the development of modeling amplifiers, and they’re continuing their pioneering ways with the Spider V MkII Series.

There are six amps in the Spider V MkII line, each classified principally by its wattage, from the 20-watt Spider V 20 MkII to the 240-watt Spider V 240 and 240HC MkII. As the wattage grows, so do the number of features that the amps offer. For example, the 30-watt V 30 MkII has 128 presets to the 16 in the V 20 MkII, while the V 60 MkII, V 120 MkII, and V 240 MkII all have a 60-second looping device built in, allowing users to play along with parts they’ve created themselves. But no matter which size and power level you choose, every Spider V Mk II model provides more than 200 types of modeled amplifiers, cabinets, and effects — meaning that your child can shift from a chiming, delay-heavy sound à la U2’s The Edge to a gritty Stevie Ray Vaughan-style blues tone with just a few button pushes. As a bonus, they also offer both a “classic” speaker mode for a traditional amp sound and a “full range” mode that lets the user plug in an acoustic-electric guitar or jam track playback.

Although desktop amps are more easily portable than traditional ones, the traditional style tends to work better in more professional settings, including the stage and recording studio. So if your loved one is planning on joining a band or is really taking his or her music seriously, you may be better off investing in a traditional amp right at the outset. That said, if you’re looking for a happy medium between the two styles, consider the Spider V 240HC MkII. It’s a 240-watt “head” (the part of an amplifier that does the actual amplifying) that, when plugged into a speaker cabinet, has enough power and punch for almost any venue. But the head doubles as a combo; in other words, it has speakers of its own built in as well. Two 4-inch speakers, to be exact, allowing for stereo sound reproduction with no cabinet required at all, and with physical dimensions that are comparable to the Yamaha THR-II amps.

Speaking of which, there are also separate head-and-cabinet configurations of THR amps. Like the desktop models, the 100-watt THR100H and THR100H Dual heads offer simulations of different tube and speaker types. The Dual model also has a function that can make it sound like you’re playing through two amps at once — a great feature for tone explorers. Matching cabinets are available with either single or dual 12″ speaker configurations; the latter can operate in either mono or stereo mode.

The bottom line is that today’s entry-level amps are way less cumbersome and far more versatile than ever before, making them adaptable to all kinds of uses … and good for years of enjoyment to come.

How to Record TransAcoustic Guitar Effects
Pianos Without Borders