The Making of a Drum Sound

It’s all about good vibrations … and proper tuning.

Ever wonder why a drum sounds the way it does, and how the sound itself is produced?

At its essence, it’s simple. Striking the head of a drum changes its shape and compresses the air inside the shell. In turn, the air presses on the bottom head and changes its shape. These changes are then transmitted to the drum shell and reflected back, and this action is repeated over and over again, creating vibrations of the top and bottom heads, which in turn create vibrations in the air, which we perceive as sound, until eventually, as the head vibrations die down in intensity, the sound diminishes and finally disappears.

But there’s more to it than just that simple explanation. For example, tuning plays a very important role.

Percussion instruments do not have the clarity of pitch found in wind and stringed instruments, but the more drums there are, the more important tuning is to creating a smooth, pleasing sound. So the term “drum tuning” does not mean tuning the drum to a pitch like “C” or “D” but rather to the drum’s resonant frequency — a certain tone preferred by the drummer. If the tightness of the head is not uniform, the tone of the drum will change depending on where the drum is struck, and it will be muddy at that. That’s why the drum head must be tightened so as to produce the same tone when struck in different places.

The top head and bottom heads are also tuned to different tensions. If both the top and bottom heads are given the same tension, the sustain of the tone is long, but the volume is low. If, however, they are given different tensions, the drum becomes louder. In addition, if the bottom head is tighter than the top head, the tone rings longer. However, if the bottom head is looser, the tone does not ring so long, and the tone is flatter. The greater the difference in tension between the two heads, the greater the change in tone.

Here are a couple of videos that demonstrate what we’re talking about:

It’s also important to tune drums to one another. For example, if the tom-toms are close in tone, the sound will be unclear — that’s why they’re generally tuned differently. Several tom-toms are sometimes tuned to a musical scale and used to play a melody.

The Relationship Between Diameter, Depth, and Tone

The tone, sustain and projection of a drum is affected by the shape of the shell. 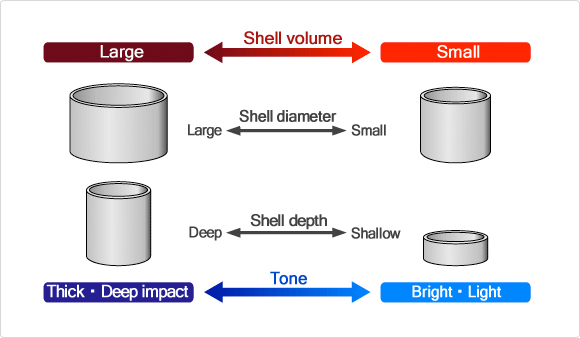 Drummers select drums with certain diameters or depths to match the style of music they perform, and they tune the drum heads to their liking to express a rainbow of tonal qualities in their music.

Now you know how drum sounds are produced, and how important tuning is to the sound you hear!