Madison Scouts and Yamaha – Marching Together Since 1985

With long nights on a bus driving to the next performance, early morning wake-up calls and humid days on the football field in rehearsal, the last thing a drum corps, high school band or any other musician needs to worry about is instrument reliability. Yamaha tests its percussion products extensively with numerous drum corps so that students and band directors have one less thing to worry about.

Take, for example, the famed Madison Scouts Drum and Bugle Corps, with whom the Band & Orchestral Division of Yamaha Corporation of America have been partners for over 30 years, marching in step to make great music. “May you never walk alone” is the apt creed that typifies the 67-year history of the Scouts, and anyone who has taken part in the intense camaraderie and creativity of such a group can understand just how deeply it runs.

Since first forging the partnership in 1985, the Madison Scouts have used Yamaha percussion instruments exclusively, but that is only the beginning. The Corps has also lent its expertise to the testing of many of our products in the rigors of an outdoor setting, and has contributed directly to the development of several landmark Yamaha instruments and accessories, including the sfz™ snare drum, stronger tenor and bass drum lug casings, deep cut tenors, the MTS snare drum, different types of Acoustalon™, outdoor keyboard frames such as the Multi-Frame I and Multi-Frame II, concert bass drum stands, stadium hardware, and drum covers and carriers.

An estimated 1,700 young Madison Scouts percussionists have used Yamaha instruments since that time, benefiting not only from the use of the equipment but from a constant supply of advice and support from the people who create it. “The kids in the corps throughout the years have always been grateful for Yamaha’s support, and it has really enhanced their experience performing on state-of-the-art instruments,” reports Jeff Moore, former Scouts percussion arranger and director, adding, “these young men have never taken it for granted.”

Relationships are at the core of our lives and everything we do each day. They are not something easily made, but with a lot of hard work can grow to become something wonderful and meaningful. The Madison Scouts and Yamaha have enjoyed such a relationship for over thirty years. We are looking forward to the next thirty! 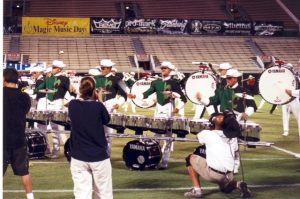