Welcome to a new feature here on the blog! In this series, Yamaha Artists will talk about different aspects of music and music-making that are important to them.

Someone recently said to me that true genius is defined as an artist who reaches their limitations. Ultimately, I do not think there are limitations. Actually, I believe that anything is possible. Whether that thing is worth working on may be up for debate, but I’ve seen players who work on some difficult piece, and it’s an amazing triumph when they finally can play it. That said, if you listen to someone play Bach on bass when it was written for harpsichord, it may not sound that good. It’s an incredible accomplishment, though.

The pursuit is what matters. I’ve learned a lot of pieces written for other instruments, and they always lead me to new, fertile ground on the bass. Sometimes it helps with composition and songwriting, other times with how I approach a transition or a voicing.

Limitations exist to be broken. Regardless of the instrument, if you look hard enough you’ll always find someone who has pushed beyond perceived limitations and blows everyone away. People heard Chuck Berry and thought it was the greatest electric guitar work they’d ever hear. Then, along came the Ventures. Then Hendrix. Then came Ritchie Blackmore, John McLaughlin, Eddie Van Halen, Yngwie Malmsteen, Alan Holdsworth … and then someone else and someone else and someone else — and it’s still happening today.

Again, anything is possible. It may take you a while, but if you climb up the mountain one step at a time you’ll eventually get to the top. I never considered anything out of my range, although a couple of times when I was confronted with an impossible piece I’d start second-guessing myself. But I’ve learned that if I stick with it, I’ll finally figure out a way to get those notes off that board of wood and strings. Don’t think in terms of limitations. If you hit a wall, you learn how to innovate, and you go around that wall on a path you didn’t know existed … and maybe no one else did, either.

Part of figuring out your own way is to play. And by play, I mean play a lot. I started out in an 11-piece band, and for our first paying gig, each member received $2.95 at the end of the night because the band was so big, we had to rent a U-Haul to get the gear there. Eventually, I joined a bar band that eventually turned into Talas. We played constantly. High school dances, weddings, store openings, clubs, every night of the week. We did 21 nights in a row at one point. All that experience onstage every night in front of people went into my bass playing. It didn’t come from spending my time in a bedroom with YouTube.

My generation, we played live constantly. I never saw Saturday Night Live because we always played every Saturday night. People always would talk about the jokes, and I’d say, “What is this show? I’ve never seen it.” Every band I know that became successful started as a cover band. The Beatles, Van Halen, AC/DC, Oasis – all those guys were out in clubs playing covers. That’s how you learn to play, and that’s what makes your writing chops great, because you know how to put a chorus after a verse and a bridge in-between. You learn how to write a song that will entertain people and keep them on their feet.

People often joke about the bass player being the tall guy in the back bobbing his head and not doing much. But this is show business, and I love to play, and I love being onstage. It was great when I finally joined a three-piece band with lots of space to move around. I wasn’t jammed in like I had been in the horn band I started out with, and that gave me space to express myself. Here’s how I looked at it: The first live show I ever saw was Jimi Hendrix — I didn’t think I wasn’t allowed to do that on bass. People were roaring, and I thought, “I want to do that too.” So I did.

It’s not just about fun. The stage isn’t for having fun. It’s for performing. I want to put on a great show, and when you do, you have fun. Put on an amazing show that people love and they will come back to see you again. When you’re up there, 3 – 4 sets a night, even on a Monday night, and there’s one table with two people, and there’s four waitresses, you still have to perform as though it was a packed house.

So when you see me having fun up on stage, it’s a result of evolution. I’m working hard, and through the years, by doing my thing, all that stuff is what comes out. I don’t have a “bass-face” that I put on to be showy. I can’t even dance. There’s no theatrics involved — it’s genuine and spontaneous. Practicing the look on your face, or the way you move, would be the equivalent of hearing a joke and thinking about how you should laugh —completely unnatural and against artistic expression.

Take David Lee Roth. Dave is a master showman, and he’s still my hero. The things he does are from his heart and soul. A lot of things he says are completely scripted, but what he does comes from 1940s entertainment. When you’re in front of a crowd, you don’t necessarily want to make stuff up, because you don’t know what’s going to work or not. When you go out to see a comedian one night and then see them the next night, it’s the same jokes. They modify them a little, but it’s the same. Once you’ve got a joke that works, you stick with it.

So, the first time Dave screamed, “Look at all the people here tonight!” the crowd went nuts. And it’s still hilarious. At the arena level, you can’t take the kind of chances you can at a club. When you play at a club, sometimes it’s your friends in the crowd. People are ordering drinks and not listening. You can get away with a lot of nonsense and foolishness, but if you tried it in an arena, it would be met with blank stares and silence.

Dave has got it down to an exact science. What you do and how you speak when you’re in front of 20,000 people matters: You never say anything that can’t be answered by a positive, uproarious “Yes!” from the audience. I remember one show where I was playing with someone else and the guy asked the audience, “Are we having a good time, or what?” No one knew how to answer “Or what?” There’s a lot to it, and Dave is the grand master. I learned so much from him — it was a free Ph.D. in Show Business.

After decades of gigs, I still love walking up those stairs to that insane cheering and roaring. It’s an incredible payoff for 50 years of hard work and playing, and I feel I’m being overpaid sometimes. It’s an incredible experience, and my plan is to do it for a long time to come!

Photos by Josh Withers and courtesy of Billy Sheehan.

For more information, go to billysheehan.com. 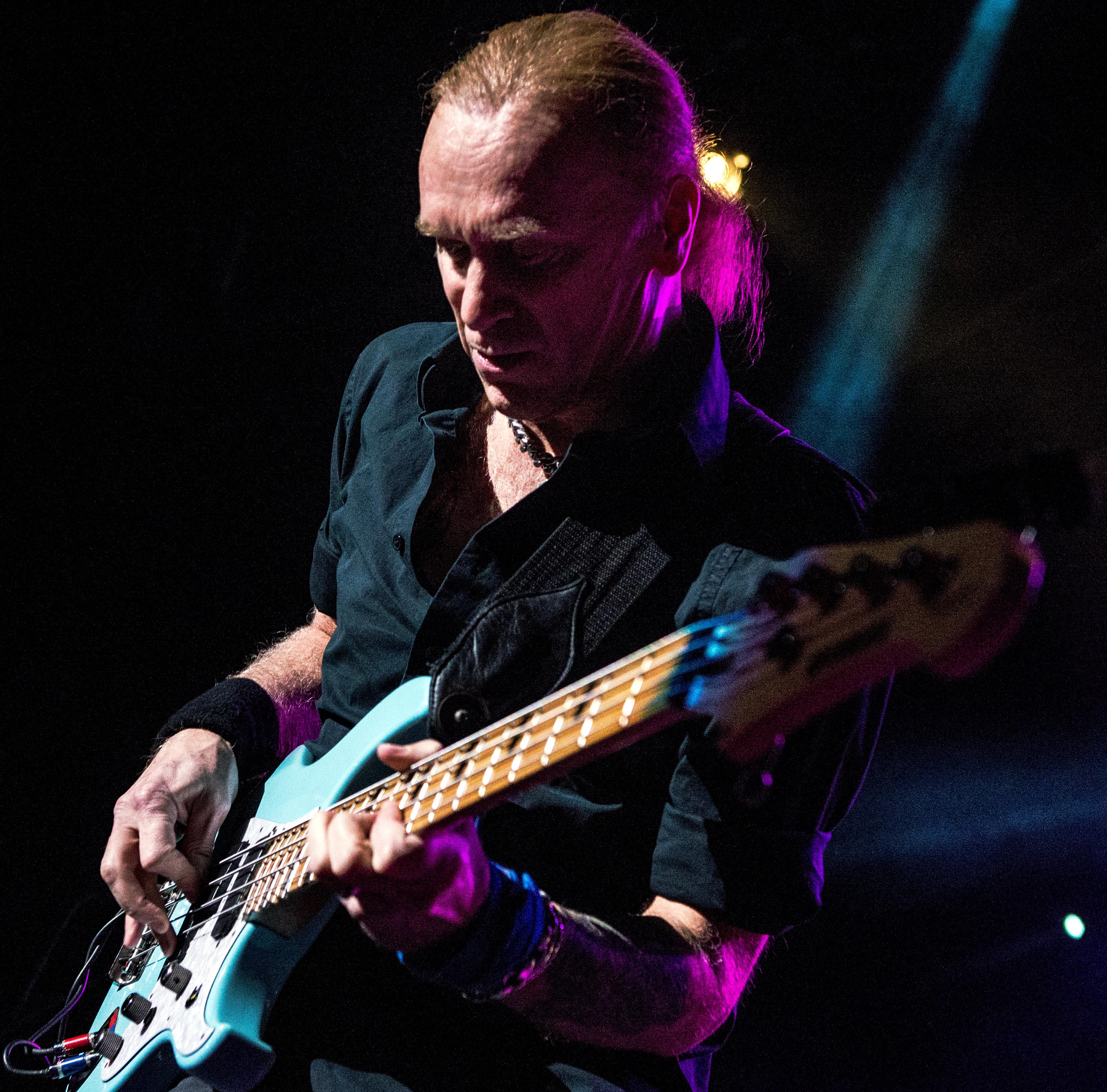 Billy Sheehan has played bass on dozens of records and toured all over the world for many decades, with a unique and original style of playing that has been widely celebrated and documented. Starting in his hometown of Buffalo, New York with the now legendary hard rock trio Talas, he went on to join former Van Halen singer David Lee Roth in 1985, along with guitarist Steve Vai and drummer Gregg Bissonette. In 1987, Billy left to start his own band, Mr. Big, and in 2002, he founded Niacin, a fusion/blues trio that featured drummer Dennis Chambers. More recently, Billy joined former Dream Theater drummer Mike Portnoy and guitarist Richie Kotzen to form The Winery Dogs. Billy Sheehan has had a huge and undeniable influence ...

The Modern Drum Set: Part 3: Toms
The Power of Music: A Musical Message of Healing