Here are five cool facts that even many clarinetists don’t know about their instrument:

1. It’s One of the Newer Orchestral Instruments

The clarinet is a relative newcomer among woodwind instruments. It is generally believed to have been invented by the Nuremberg instrument maker Johann Christoph Denner at the start of the eighteenth century. A similar instrument — the chalumeau — was already in existence at that time. However, the chalumeau only sounded good mainly at the lower registers, while the clarinet boasted rich sound quality at both low and high registers. Possibly for this reason, the name “clarinet” originally meant “small trumpet” (“clarino” means trumpet).

The clarinet produces sound by means of a single reed attached to the mouthpiece. A number of physical finger keys are attached to the cylindrical section (known as the body) and are used to vary the pitch. Up until the first half of the eighteenth century, the clarinet had only two finger keys. However, more were gradually added to the instrument to enable the clarinetist to play chromatic scales and clean notes more easily.

The configuration that is now standard was perfected by Klosé in the mid-nineteenth century, based on the ideas of Theobald Boehm. Since the instrument is based on Boehm’s system, it is called the Boehm clarinet.

2. It Has an Extensive Family Tree

The clarinet family is comprised of a number of similar instruments. It includes instruments of various sizes, such as the piccolo (or sopranino) clarinet and the alto clarinet, as well as instruments whose construction is slightly different, such as the basset horn. The basset horn, with its curved tube, was invented in the latter half of the eighteenth century and was chiefly used in works by classical composers. 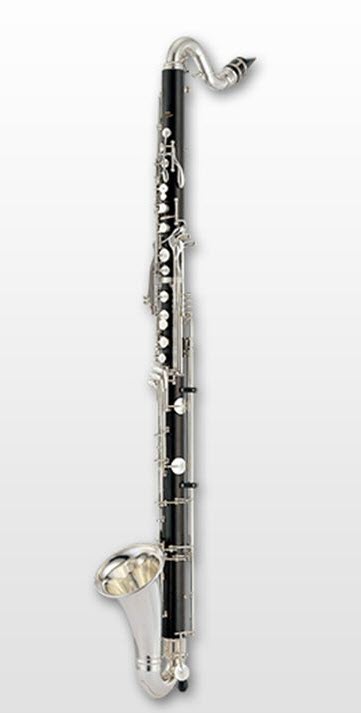 3. There’s a Bass (And Contrabass) Version Too

The first evidence of the existence of a bass clarinet comes from France toward the end of the eighteenth century, when a man named Gilles Lot created an instrument called the Basse-Tube. It did not enjoy much success at first.

The bass clarinet as we know it today, with its large keys and straight tubular body, was first made by Adolph Sax (inventor of the saxophone) in 1838. That’s when the instrument first took its current shape.

The first piece of music to feature the bass clarinet was Meyerbeer’s Les Huguenots, which contains a long solo for the instrument in the fifth act.

4. Clarinets Have Been Made from Various Materials

Most early clarinets were made of boxwood or ebony — the same materials that were also used to make recorders. In those days, the reed was secured in place by windings of string instead of being attached by a ligature.

Today, grenadilla is now the most commonly used material for clarinet making. It has a higher relative density than boxwood, giving the instrument a rich and beautiful tone. In addition, it provides a wider dynamic range — when playing quietly, the sound becomes soft and gentle instead of becoming weak.

5. It’s Been a Major Source of Inspiration to Composers

The distinctive richness of the clarinet’s timbre and the instrument’s expressive power has long stirred the emotions of composers.

Mozart, for example, wrote a magnificent work for clarinet, the Clarinet Concerto in A major, Köchel 622. It is said that he was greatly inspired by meeting the clarinetist Anton Stadler. In those days the clarinet had only just been invented, so Mozart must have been eagerly writing pieces for it in order to find out how best to employ this new instrument in performances.

In his later years, Brahms also wrote many works for the clarinet. As had been the case with Mozart, it was meeting an influential clarinetist — Richard Mühlfeld — that aroused his creative urge and gave rise to his Clarinet Quintet in B minor, considered a masterpiece among great classical works.

One of the most outstanding American composers of the twentieth century was also captivated by the instrument. Aaron Copland wrote his famed Clarinet Concerto for popular clarinetist Benny Goodman. Against the backdrop of a colorful orchestration, the work features virtuoso passages and is tinged with jazz elements to suit Goodman — the master of swing jazz. Incidentally, Goodman’s playing attracted many composers, with Bartók’s Contrasts and a Hindemith concerto dedicated to him as well.

This posting is adapted from the Yamaha Musical Instrument Guide. For more information about Yamaha clarinets, click here.