For the past few decades I’ve been writing songs for and collaborating with established recording artists. My job description has included helping them define themselves and offering a safe space to explore their feelings. I’ve been part Muse, part therapist, part fun hang. I’ve loved every minute of it and I’ve enjoyed some notable success. 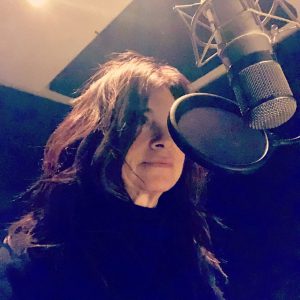 Me, taking that leap.

But now, as some of you may know, I’m taking a leap of faith as I attempt the difficult transition from songwriter to artist. For the first time in my career, I’m recording my own album — stepping out into the frontline, so to speak. I’ll be re-imagining some of my more familiar songs (“Bitch,” “What A Girl Wants,” “Almost Doesn’t Count”) and also debuting some of my personal favorites that never saw the light of day.

Up until now I’ve been the accommodator, privy to the goings-on inside the minds of artists while writing their records. And I assure you there’s a lot going on in there.

First and foremost, an artist wants to feel authentically connected to a song. (Of course, their A&R person’s opinion matters as well, since the label will ultimately decide what’s marketable.) In addition, they’re projecting what the critics might say, hoping their fans will dig the direction, and, if I’m brought into the picture, trying to navigate that annoying little voice in their head that tells them co-writing with a professional songwriter will diminish their cred. As you can see, there’s some calculation involved during the creative process.

That said, I always listen to their concerns and voice an opinion when I have one. But to be perfectly honest, sometimes I find their thought process neurotic. The suggestion that we write a song at a fast tempo because there are already too many ballads on the album is ridiculous. Or that we pen something non-relationship-centric because there are too many love songs. That’s just nuts. Write what’s on your mind!

Side note: In 2007, Sara Bareilles’ A&R people felt that a love song was what was missing from her album-in-the-making and they insisted she write one. Defiantly she went home, wrote “(I’m Not Gonna Write You A) Love Song” and ironically had a big fat hit.

Calculating is the worst thing an artist can do for their art.

But that’s easy for me to say. Because here I am, seven songs in the can and I’m internalizing the same way all artists do.

For instance, I’m listening back and wondering if I need more songs with faster tempo. (Left to my own device, I’d write a ballad every day.) I’m asking myself if the recordings we’ve done thus far are too love-heavy. Wouldn’t something in 6/8 break the monotony of all the 4/4? As if that wasn’t bad enough, I’ve come to realize that I default to the same strum every time I pick up a guitar, so many of my songs have identical heartbeats. Disaster! And I obsess that no two songs in a row on an album be in the same key — a pet peeve. My ears enjoy a tonal shift in between tracks. (Will that matter to my listeners? Who knows.)

But my main concern is that, in having written for so many artists from all different genres (Keith Urban to Britney, Jessie J. to Reba, The Pretenders to Xtina), I’m stylistically all over the place. It’s like a burrito, kale salad and a pizza all on one plate. I worry that this is going to be too much of an eclectic listening experience, as opposed to a consistent cuisine all throughout the meal.

Maybe I’m just as neurotic as my colleagues on the other side of the table. Maybe I’ve been overthinking with the best of them. Maybe it’s not as easy as I thought to simply write what you love and sing it.

So I say this to all those artists I judged: I’m sorry! I get it! Now I know how it feels. Making an album is a complicated and personal process.

To be fair, however, when I take a step back and ask myself what I would tell myself if I were my own best friend, it would be this:

It’s not your intention to be a new break-out Diva. You’re not vying for artist of the year. Your record doesn’t have to be one consistent vibe. It’s meant to be more of a collection … a celebration of songwriting. After all, songwriters are artists too. And I need to fly that flag.

I’d love to see performers take the opportunity to put themselves in the accommodator’s shoes every once in awhile — to step behind the curtain and let the other gal shine. Maybe more of us should swap creative roles as an exercise in life. We’d all understand each other a lot better.

I hope to start sharing the music with you soon. It will most likely be released in dribbles, as is the custom these days. One single at a time until bam! … the whole album drops.

But of course, no two songs in a row in the same key!

If you’ve made a similar transition, or are contemplating one, I’d love to hear about it. I look forward to reading your comments on my Facebook Page.

Shelly Peiken has been a behind-the-scenes force in the music business for more than two decades. She is best known for penning female-empowerment anthems such as Christina Aguilera’s Number One hit “What a Girl Wants” and Meredith Brooks’ “Bitch.” Her book “Confessions of a Serial Songwriter,” a memoir that chronicles her journey from a young girl falling under the spell of magical songs to writing hits of her own, earned her a second GRAMMY nomination for Best Spoken Word Album. (You can find her music at http://hyperurl.co/shellypeikenmusic) Shelly is a fierce advocate of creators’ rights with her grassroots organization, SONA (Songwriters of North America). She lives in Los Angeles with her husband, daughter and two cats.

Choosing the Right Brushes and Multi-Rod Drumsticks
The Power Of Music: Chasing Away The Holiday Blues