“Breaking Amish” With My Yamaha FG-TA

It’s all about creating a vibe.

I own a lot of guitars. As a guitar-centric TV composer, I need to have many different sounds at my fingertips and I rely on my instruments to provide a wide palette of sonic options for whatever show I’m working on.

The Yamaha FG-TA TransAcoustic guitar, with its unique built-in reverb and chorus, can literally do what no other guitar in my collection can do, making it an invaluable tool in my creative arsenal. Simply pressing a button on top of the FG-TA causes a small metal disk inside the body called an “actuator” to vibrate in response to the strings. Those vibrations are then conveyed to the guitar body and come out of the sound hole along with the natural sound of the instrument. To control the amount and depth of the resulting reverb and chorus, all you have to do is turn up the associated control knobs atop the guitar. In just seconds, you’ve got something special going: a vibe, something that is very important to my compositions.

I was recently asked to compose several cues for the TLC Network reality show “Breaking Amish.” Some of the scenes in the show are moody and unsettling, and so I reached for my FG-TA to elicit those feelings. 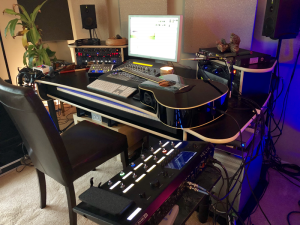 Since the guitar has a built-in pickup, I can output the signal to outboard effects as well, taking things a step further. For this cue, I started by plugging the FG-TA into my trusty Line 6 Helix® guitar processor, and connected the left and right outputs to my DAW. I then placed an omnidirectional microphone directly in front of the guitar to capture the natural sound of the instrument, for a total of three channels.

For the first pass, I engaged both the reverb and chorus effects on the FG-TA. These effects were not only picked up by the microphone (since they come out of the sound hole), but were also sent into the Helix via the guitar’s direct output. Using a patch that I modified with the unit’s onscreen editor (shown below), I added a bit of dynamic compression, as well as some delay (set to 69 beats per second, which was the tempo of the cue) and a little additional reverb. Using the Helix panner, I split the stereo signal hard left and right, giving me independent control over the effects coming from each side:

The combination of the Helix output and the microphone picking up the built-in FG-TA effects gave me the vibe I was looking for. Here’s what that first pass sounded like:

One of the techniques that I like to use to thicken guitar tracks is to double-track the first pass. Sure, I could just copy and paste the sound, but that’s just artificial stereo. I much prefer the natural sonics resulting from the inevitable imperfections of the second pass. In this case, I disabled the TA effect, keeping just the Helix effects enabled, to create a slightly different sound than the first pass:

To create even more of a mood, I did a third pass using an EBow, which is a hand-held, battery-powered electronic device you hold up against the strings to cause them to vibrate. For this pass, I played the FG-TA with a slide and used only the output of the Helix, adding a touch of modulation to the sound for some extra movement. This created a pad-like sound which added to the overall unsettling feel of the music:

For planning and layout in the mix, I had the first pass (the guitar with the TA effects) panned primarily to the right, with the microphone just right of center, one Helix channel far right, and the other at about 11 o’clock. For the second pass, I did the opposite, panning it primarily to the left. I then panned the third pass (the guitar/Helix effect with the EBow) at around 11 and 2 o’clock: 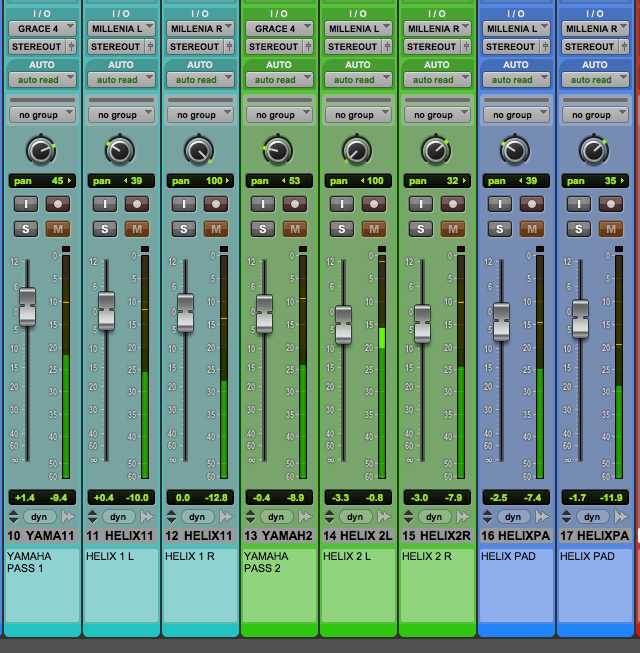 Here’s the full mix, including all three passes of the guitar, as well as some added bass and percussion:

Along with the percussive groove, they gave the cue just what was needed for the show: an emotional, slightly uncomfortable but cool-sounding vibe — all thanks to the built-in effects and overall great sound of the FG-TA.