Using a major sixth to enhance a minor mode.

In Part 1 of this two-part article, we discussed the major scale and the process of harmonization, focusing on Ionian mode, with definitions of each of those terms. This month, we’ll examine Dorian mode, which puts a completely different spin on the music you create.

The Dorian minor scale is built from the second scale degree (i.e., note) of the major scale. Playing a major scale from the second note to the same note an octave higher will give you the unique intervals of Dorian mode. (Intervals are the distances in pitch between notes.) A II mi7 chord is built by selecting consecutive 3rds from the tonic of Dorian mode. (The first note of a scale is called the “tonic” and the first note of a chord is referred to as the “root.”)

Dorian mode is often favored by rock and jazz-fusion players soloing over static or descending II mi7 – V7 chord progressions. The major sixth of the scale adds tension to the II mi7 chord, and a strong “release” and resolution of tension when it becomes the major 3rd of the V7 chord.

Moving from Ionian to Dorian Mode

Let’s start by doing a quick review of the harmony and theory presented in Part 1 for a reminder of the scale tones, chord harmony and the corresponding scale modality. We’ll continue to use the key of A major as an example.

The seven notes of the A major scale (A Ionian Mode) are:

The seven chords that are built by harmonizing the A major scale are:

If you take the same seven notes and chords, but start on the second degree of the A major scale (i.e. the note B), you create B Dorian mode:

By harmonizing these notes, we create the B Dorian mode chords as follows:

As you can see, none of the notes or chords have changed from the A major scale — we’ve simply shifted the focal point for harmonic and melodic variation within the same major scale intervals.

Obviously, playing the progression will be the ultimate test as to where our ear hears the resolution point, but in this case, it’s definitely the Bmi7 chord. Take a moment to play this progression a couple of times and end on the Bmi7. You’ll hear the chords naturally gravitate towards resolving at that point.

Melodic phrases don’t need to start on the tonic of the Dorian mode (in this case, B), but phrasing lines and licks towards the tonal center and its chord-tones will be the key to melodic soloing. The chord-tones of Bmi7 are B, D, F# and A. These are the four tones that will sound the most resolute when sustaining notes and ending your phrases.

It’s not compulsory to use the characteristic note within your melodies, but if you want to bring out the “flavor” of Dorian mode you may want to target and incorporate it into your phrases. Bear in mind, however, that the characteristic note may not be the best tone to sustain over a Dorian chord progression. Let your ears be the guiding factor into what works over any given series of chords.

Here’s an example of how to use Dorian mode from my “Master of Modes” series of video lessons available at RobbieCalvo.com:

This is the B Dorian chord progression I’m playing over:

The first note of the opening phrase in my solo is C#. I’m accentuating and sustaining this note for some time, and it works really well because it’s an additional chord tone that I added to Bmi7 to create a Bmi9 chord.

In addition to the 9th, my first two phrases resolve on F# (the 5th) and B (the root of Bmi9). It’s not until the third and fourth phrases of my solo that I really start to accentuate the Dorian characteristic note of G#.

Listen to the solo a couple of times to hear the effect that the characteristic note has on the mood of the composition. I’m also repeating melodic motifs and leaving lots of space between each phrase to let the melodies breathe and stand alone as independent musical statements. (Click here to view a transcription of my solo.) 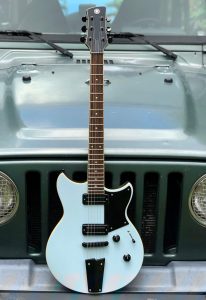 The Yamaha Design Concept guitar in this video is based on the standard Revstar RS502T model, with a few modifications to the hardware and finish. The “Ice Blue” color is standard on Revstar RS320 models, but here it serves as a striking backdrop to the black Rautia humbucking pickups, tailpiece and scratch plate. While filming, I was concerned that the gloss finish would create a reflective glare, but it was perfect on camera and stayed in focus the entire time.

The neck and back of the guitar are treated with a translucent eggshell finish that allows the auburn tone of the mahogany neck and body to glow through it. The “dry” feel of the finish also facilitates effortless position shifts on the fretboard.

The Rautia pickups retain a smooth clarity when overdriven and respond beautifully to personal dynamics and the subtle nuances of single-note lines. The guitar tones sit nicely in a busy mix, making it perfect for video projects and recording sessions.

The music we craft changes in terms of mood and emotional response when we alter the harmonic structures to resolve to the unique tonal centers found within the major scale. Even after decades of playing and teaching, I’m still amazed at how the Ionian and Dorian major scale modes can produce completely different content using the same seven notes.

NOTE: There are five more major scale modes to discover, each with their own unique flavor. If you’d like to continue your study of the major scale modes, my new video course “Master Of Modes” is available at http://www.robbiecalvo.com. The course contains eight video lessons and seven studio tracks, as well as tab, notation, scale/arpeggio diagrams and text for each of the modes.