Playing with a slide opens up expressive and unique sonic territory for guitarists. But even if you’re an experienced player, it isn’t something you can just pick up and start doing well. It requires adjustments in technique — and sometimes even to your guitar — not to mention plenty of practice.

In this article, we’ll look at the origins of slide guitar and cover slide types, guitar setup and suggested tunings. In Part 2 (coming next week), we’ll discuss basic playing techniques. Ready to begin? Let’s dive in …

Slide guitar has its origins in the blues of the Mississippi Delta, where slides were often used on metal-body resonator guitars. After the solid-body electric guitar arrived in the late 1940s, its additional sustain gave slide a whole new sound. Among the best known early electric slide players were Elmore James and Muddy Waters, both huge influences on Rolling Stones guitarist and co-founder Brian Jones, who helped spearhead the popularity of blues music in the 1960s.

Towards the end of his Beatles career and on his solo records, George Harrison frequently played slide guitar (most famously on the intro to his hit single “My Sweet Lord”), but it was Duane Allman of the Allman Brothers Band who truly revolutionized the technique, with a swooping, melodic style that helped bring the sound of slide guitar to a much wider audience, in turn influencing a whole new generation of musicians.

Slides come in a variety of materials, sizes and weights. Most are either metal (steel or brass), glass or ceramic. All have different tonal qualities. As a rule, metal slides tend to be heavier, which provides more sustain, and they have a more robust and brash tone. Glass slides are lighter and smoother sounding. Ceramic slides tend to split the difference in both weight and tone. 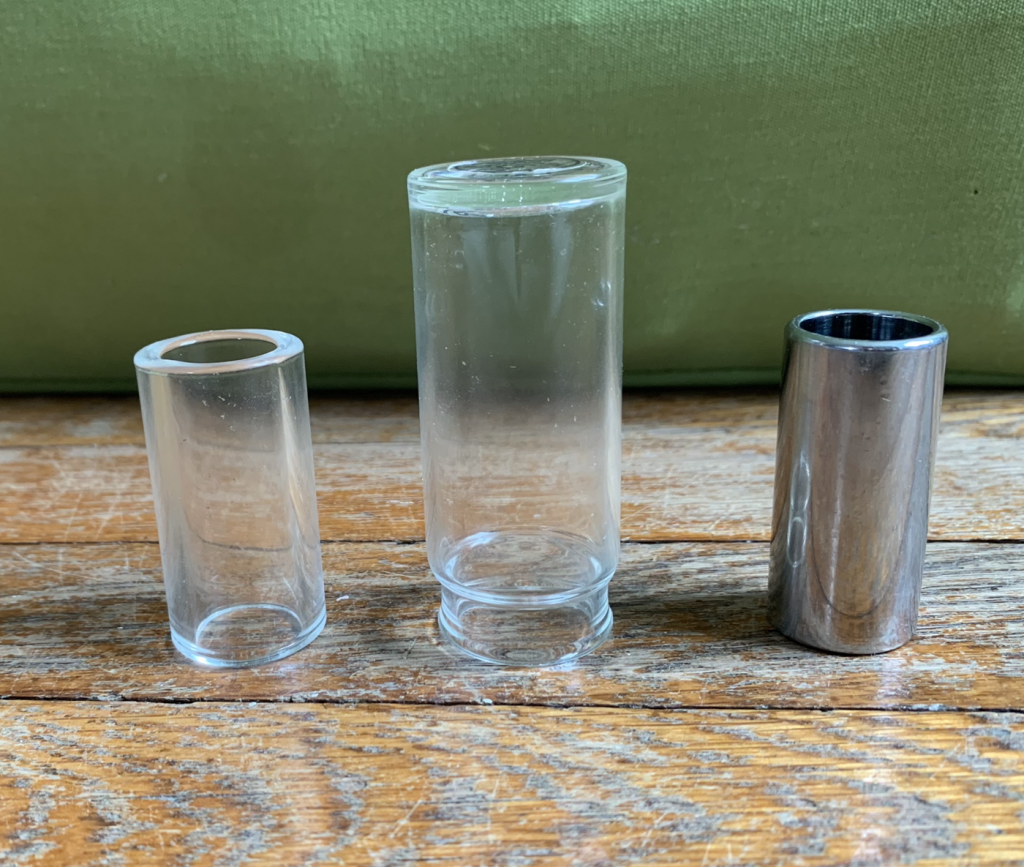 Some different slide types and sizes.

Of the three, metal slides are the least expensive and also the most durable (glass and ceramic slides can break when you drop them), so it probably makes sense to start with one of those. As you begin getting comfortable with slide playing, experiment with other types of slides to see which you like best.

Setting Up Your Guitar

To play slide effectively, you can’t have super-low action (string height) on your guitar. The slide will bump against the frets, and the notes won’t sustain fully. You may have to raise your guitar’s action a bit to get the best results. (If you’re not comfortable doing this yourself, hire a skilled luthier.) Adjust it so that it’s high enough for slide, but not so high that it hinders your standard playing. Using a lighter slide will mitigate the need for higher action to some degree, but probably won’t completely alleviate it.

Open tunings, such as open E (E-B-E-G#-B-E), open A (E-A-E-A-C#-E) and open G (D-G-D-G-B-D) are favored by many slide players, as are variations with the same string-to-string intervals, but tuned to a different root note.

Most slide open tunings are tuned to a major chord. So, as long as you put the slide on the fret corresponding to the chord being played at a given moment, you’ll have a chordal note readily available on every string, and other complementary tones, such as flatted 7ths, available nearby. This also allows you to play single-note lines, double stops and chords with your slide.

Slide playing in open tuning is more positional than standard lead guitar, and is not as focused on scales and arpeggios. To play against a minor chord, you have to avoid the major third or move the slide down a fret if you’re playing single-note lines.

Unlike open tunings, standard tuning only offers clusters of two or three major chord tones on a fret. This makes it more challenging in many ways than playing in open tuning. However, if you’ve already played guitar for a while, you should be familiar with notes and positions on the fretboard, which is an advantage.

Available note clusters for an E chord in standard tuning.

If you’re looking to play both rhythm and slide, standard tuning is worth considering, as is using a pinkie slide. I like to play in a modified standard tuning where I drop the high E string down to a D. This gives the first four strings the equivalent relationship of the first four in open A or open G tuning, and still leaves me with strings 2 through 6 (which I leave in standard tuning) for playing chords.

Go to Part 2, where we talk about slide playing technique.

Banner image by Maxim Fiyavchuk on Unsplash. All other photographs courtesy of the author.