In Part 1 of this series, we described how to add passing chords based on Dominant seventh chord resolutions. In this installment, we’ll dig a little deeper into this concept by creating longer sequences of those chords.

Let’s assume you want to add some more color to a chord progression, and finish up with the I chord (the root chord of the key you’re playing in). In the key of C, for example, you can set up that final chord by first playing the V7 chord, which is a fifth higher (7 half-steps) from C — in this case, a G7 chord.

You may find it easiest to understand how these chords function in relationship to each other if you read backwards from the C (the root tone) in the third bar:


The second half of the illustration above shows the same chords, this time displaying the scale tone number of each chord’s root tone, disregarding how those scale tone chords would occur in the key (i.e., major, minor, etc.).

This progression of functional chords is based on consecutive intervals of a fifth. In music theory, this is called the circle of fifths. Here’s the full cycle, including all key signatures and relative minor relationships: 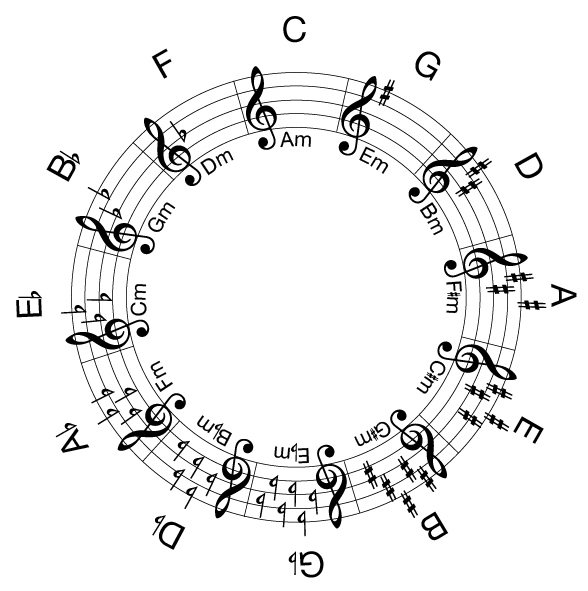 The circle of fifths allows you to easily create a longer series of chords to help connect any two chords. But you won’t always want all your chords to be Dominant sevenths. And, as we’ll soon see, they don’t have to be.

As we’ve shown, when you use the circle of fifths to set up your root tone chord in the key of C, you end up with a progression that goes from D to G to C — in other words, scale tone steps ii, V and then I. If you look at the scale tone chord qualities of a major key, you’ll see that the ii chord is a minor seventh, while in a minor key the ii chord is a minor seventh with a flatted fifth, also called a half-diminished chord, indicated by the red arrows in this illustration:

You can use these qualities to give your progressions a little more variety. As the following illustration shows, the two chords preceding any chord in this cycle can be a ii – V – I progression of some sort:

Let’s examine some of the possibilities this offers. For example, here’s a common chord progression with a ii – V – I movement applied:

Exactly how you choose to apply these harmonic devices has to take into account the melody notes of the song. In the following example, the melody notes allow the use of the progression outlined above:

But the melody of this next example presents some issues:

In the second bar, the sustained E in the melody doesn’t sound great against a Gm7 chord, so I chose to go right to the C7, which acts as a V7 to the coming Fmaj7 chord. To add a little more interest, I chose not to use the root in the bass of the chord, using the G note as a passing tone to bring me down to the coming Fmaj7 nicely. Then I got a little more advanced, and on the last beat I used a tri-tone substitution of the C7 chord to add a little more movement on the way down to the Fmaj7th. (At this point, you might want to refer to last month’s blog post to review the concept of tri-tone substitutions.) In the fourth bar, the G# note didn’t sound good against the B half-diminished chord, so I went right to the E7, and then brought back the ii – V for the last two beats of the bar.

An understanding of Dominant chord resolutions, the circle of fifths, and ii – V – I chord progressions will allow you to add variety and sophistication to your playing. Once you have a firm grasp of these concepts, the next step is to decide on voicings — that is, the assignment of the notes between your two hands — to sound your best. This will largely be based on the style of music you are playing, as we’ll be exploring in future columns. Stay tuned!