In previous installments, we’ve been practicing good voice-leading, where we move each note in our voicings to the nearest adjacent note when changing chords. In this, the final article in this three-part series, we’ll extend that concept by creating what are called passing tones within our chords. This will allow you to get more variety than just playing one voicing per chord change.

You can think of passing tones as small melodies that occur within your chordal playing. For each chord quality (major, minor etc.), there are commonly used notes and color tones (that is, notes beyond the 7th) that can be employed to create this type of internal movement. The most typical way to extend a major chord is by playing it as a suspended 4th resolving into the 3rd, as shown (and heard) in the first bar of this example:

In the next two bars, there’s even more movement, accomplished by using color tones from the C major scale to create melodic interest. (In bar 3, I simply change the inversion of the notes in the right hand.)

You can think of these as small inner melodies: the left hand plays A, G, F, G, while the right hands plays in parallel with it, but a sixth higher (D, F, E, D, E). At the same time, the lower notes in the right hand move down from D to C and then B. It sounds a bit like a church hymn, and hymns are in fact a great resource for learning good voice leading. Just add some colorful harmony and you’re moving in the right direction!

As an aside, many years ago I went to see the late, great jazz pianist Bill Evans at the Village Vanguard club in New York, and I had the opportunity to speak with him during his break, asking (more like begging!) him for lessons. He deferred, but told me that he learned his basics of good voice leading by studying and playing the Bach Chorales.

Another common, though perhaps clichéd movement on a major chord is to go from the 5th to the augmented 5th and then into the 6th, as demonstrated in the first bar of this example — a sound that always conjures up Broadway musical styles to me:

In bar 2, I move from the 5th up through the augmented 5th to the 6th, and then back down again. In bar 3, I make that movement the inner part of the voicing, and in bar 4, I use the concept to just move down chromatically with the inner voice from the 6th into the 5th.

Next, let’s explore common movement for a minor chord, with is usually done by going from the root to the major 7th, then into the flatted 7th, and sometimes the 6th:

In the first bar, I cycle through the root and 7th tones, similar to the augmented movement played in the previous example. In bar 2, I add the 9th to the voicing, and descend chromatically from the root down to the 6th. In bar 3, I move the descending line down into the left hand, and in bar 4, I vary the right hand voicing to create a minor 6th chord. Bars 5 and 6 show ways to make the movement ascend from the 5th up into the 6th, and in bars 7 through 9, I explore left hand chromatic movement between the 5th and 6th.

The Dominant 7th chord has the most possibilities, since there are so many choices for the color tones. The 9th can be natural (D), flatted (Db) or raised (D#/Eb); the 13th (same as the 6th) can be natural (A) or flatted (Ab which is the same as the augmented 5th G#); and you can also flat the 5th (also called a #11). 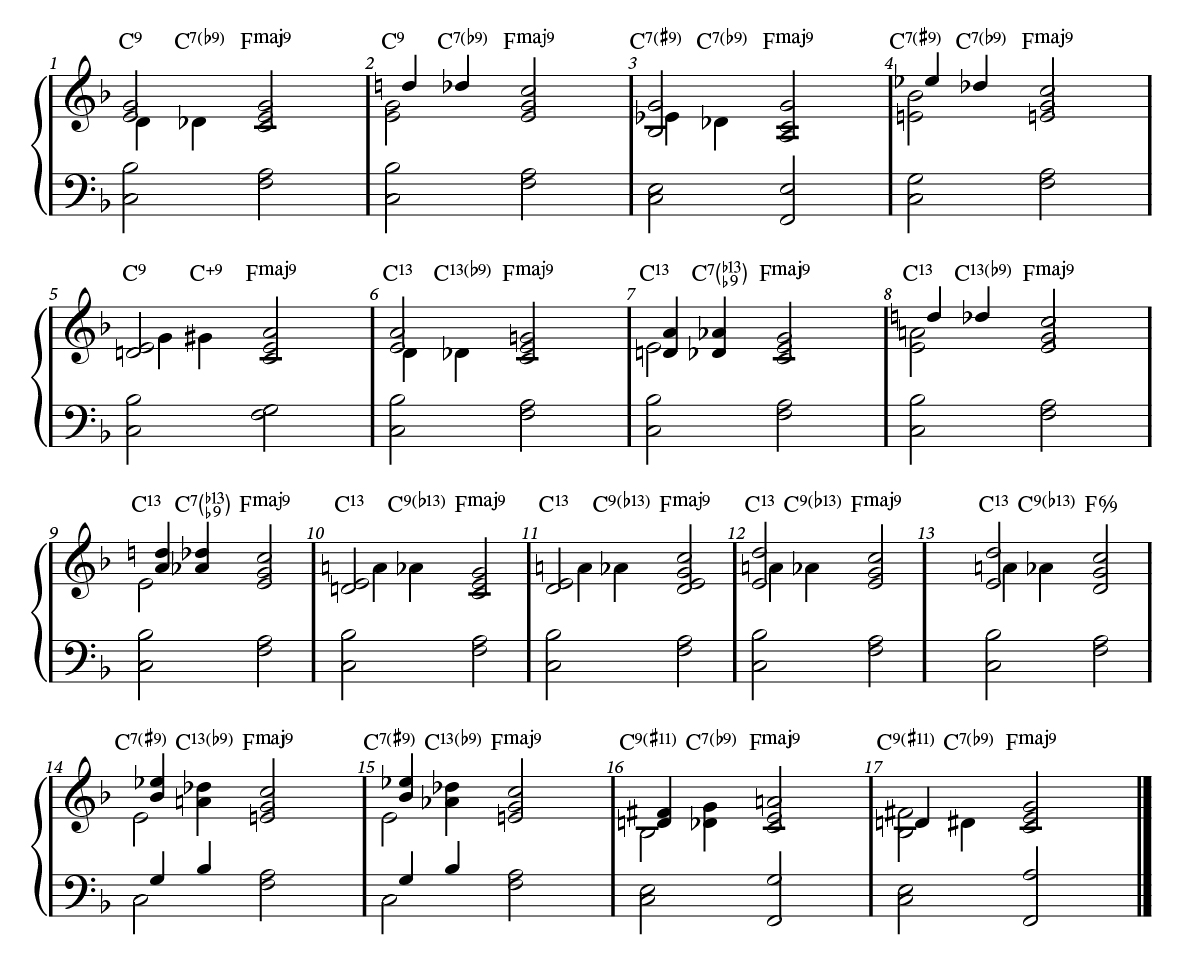 The first two bars demonstrate a 9th to flatted 9th movement, and the next two bars show sharp 9th to flatted 9th. Bar 5 goes from the 5th up through the augmented 5th into the 6th. From there, I explore a variety of mixed uses of 9ths and 13ths while varying the final chord as well.

Using the suspended 4th to 3rd movement also works well on dominant chords, so we can add that to our mix of possibilities:

A dominant chord also functions as the V7 chord in a minor key, so let’s finish up by exploring some possibilities for that scenario: 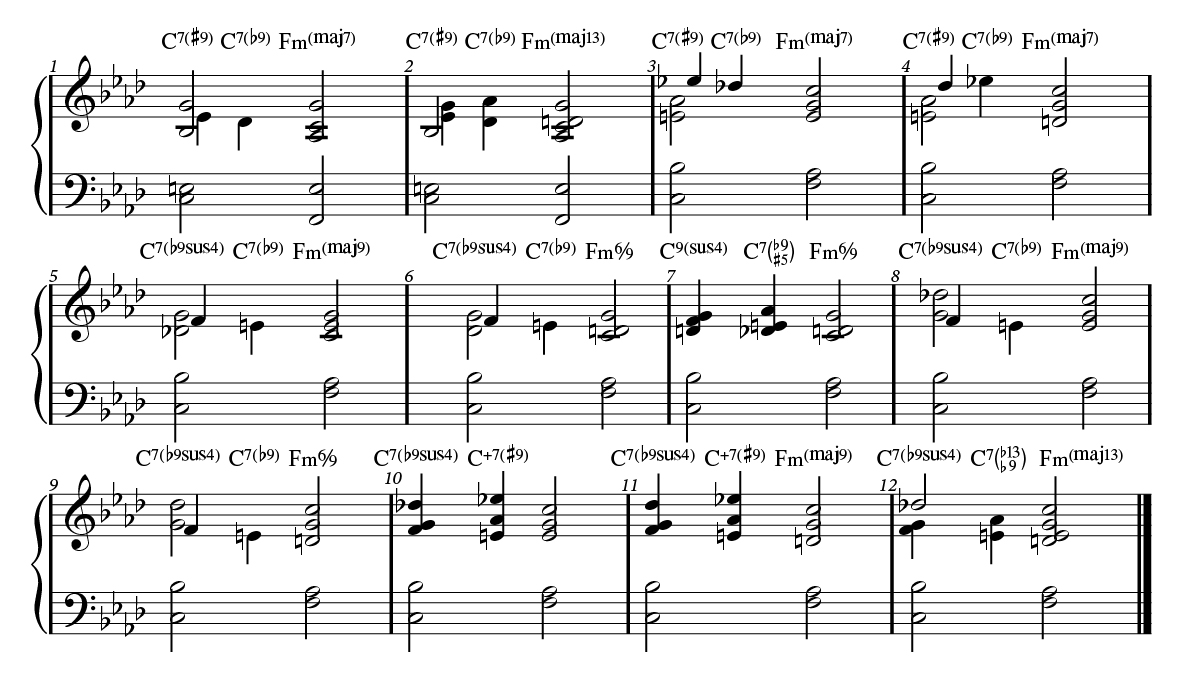 Putting These Concepts Into Practice

To show you how these inner lines can add a character to your playing, let’s revisit a tune we explored previously — a harmonization of the jazz standard “Autumn Leaves,” accompanied by some bass and drums:

As you can hear, there’s already a little bit of voice movement, specifically in bars 2 and 14, but here’s a revision with a lot more motion: 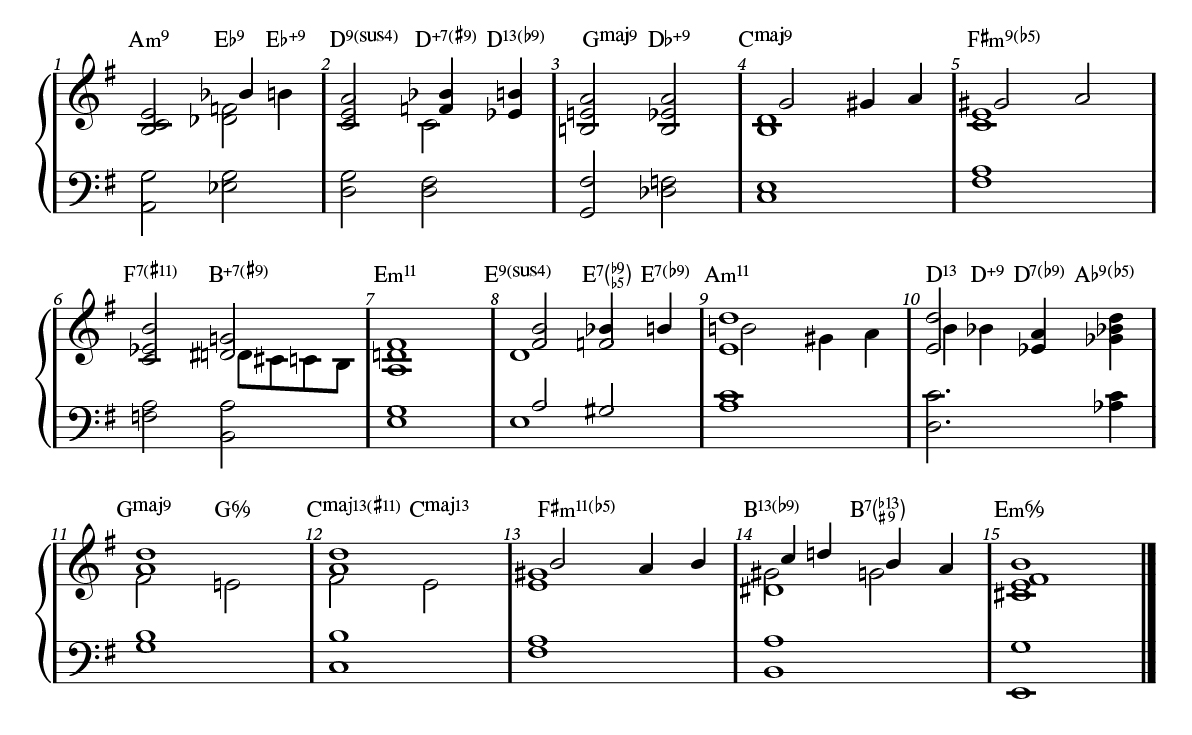 In bars 1-5, the movement has been added to the top of the voicings, but starting in bar 6 it happens in the middle of the chords. And then starting in bar 13, it goes back to the top. Notice how it adds more interest to the part?

For our last example, let’s move to a solo piano style, where I play the melody of the song — a small refrain from the classic “Over The Rainbow” that’s pretty advanced harmonically. Listen along to the audio clip and follow the inner voices to get a feel for how the voice-leading creates beautiful countermelodies against the main melody. 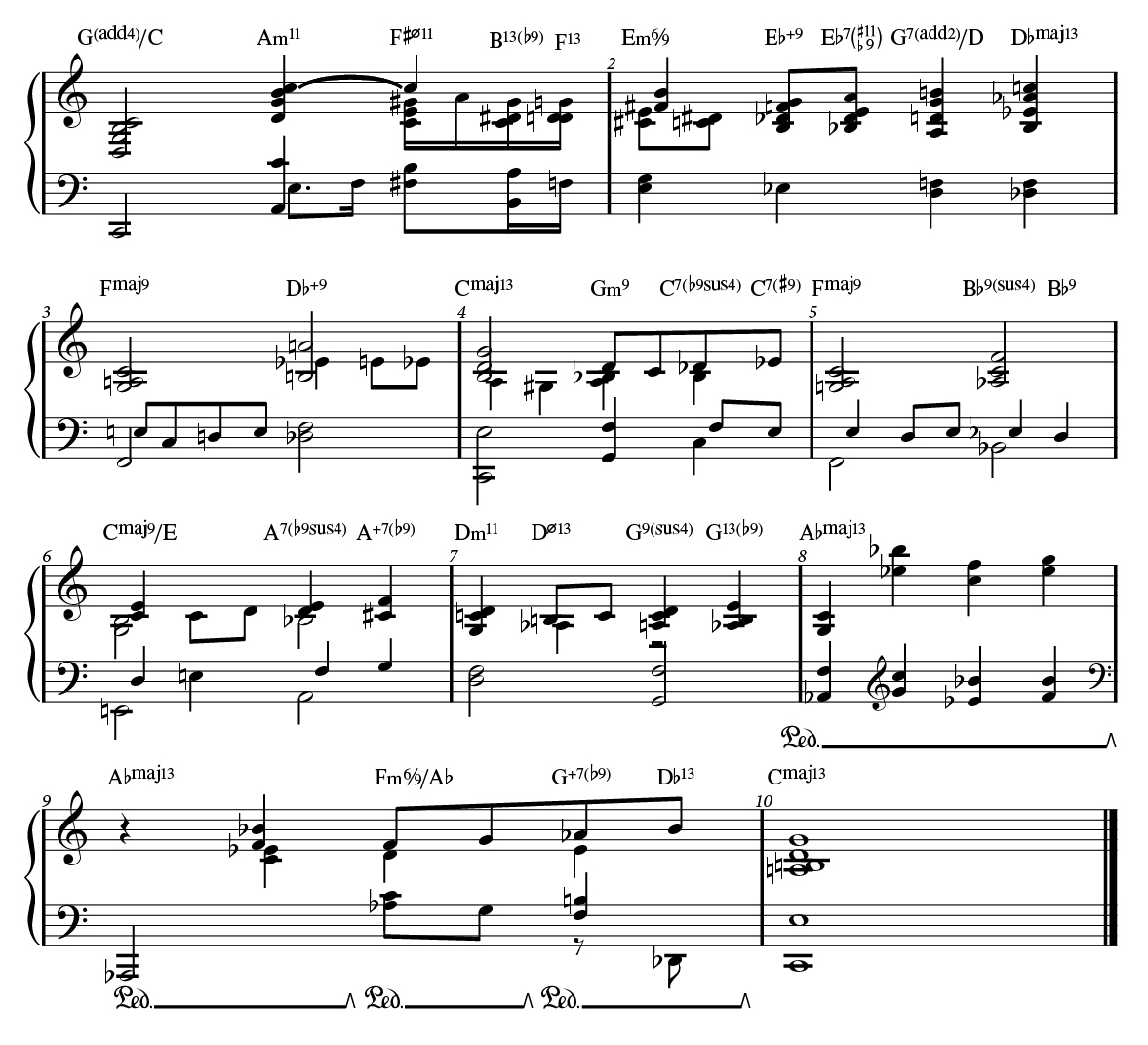 We’ll come back to this example in a future “Well-Rounded Keyboardist” to explain some of the harmonic ideas. For now, enjoy it and learn to play it.