Setting Up Jazz Figures on the Drum Set

How do you treat figures on the drum chart in big band and small group jazz? I want to provide some clarity for those of you who are jazz band educators who do not play the drum set. I also want to help folks who are interested in applying their drum set skills to big […]

How do you treat figures on the drum chart in big band and small group jazz? I want to provide some clarity for those of you who are jazz band educators who do not play the drum set. I also want to help folks who are interested in applying their drum set skills to big band or small group jazz playing.

The term “figures” simply refers to the written musical notes on the sheet music. For almost all instrumentalists, the task is to play exactly what is written on the sheet. For the drummer, a figure may mean one of three things: 1) play the exact figure, 2) do not play the figure or 3) play prior to the figure and then play the figure (more commonly referred to as “setting up” the figure). These scenarios can be daunting for inexperienced drummers because it can contradict much of their prior concert band training.

The decision to approach these figures in one of these three ways will differ depending on the director’s and the drummer’s tastes as well as the skill level and needs of the ensemble. Sometimes the figures should be played as written on the snare or bass drum; other times, the figures can be ignored altogether. Often, figures will be set up with fills.

Here are a few simple but effective mechanisms I have learned that have been helpful to both students and band directors when setting up jazz figures.

In Big Band for Figures Beginning on the Offbeat

To set up a figure beginning on the “&” (offbeat), I recommend playing the two eighth notes preceding the figure, and then the written note. (See Sample 1 below.)

With students, I begin teaching this concept using the “&” of beat 2 (4/4 time), as I find it is most accessible to the inexperienced jazz drummer. To set up a figure beginning on the “&” of 2, the drummer would play “(1) & 2 &,” which sets up and then plays the written figure. The two preceding eighth notes can be played on the snare drum, with the written figure accented with bass drum and cymbal.

If the desired musical effect is simply to accent the note without a setup, the time continues on the cymbal, and the note is played traditionally by the snare drum or bass drum.

I teach the “&” of beat 2 first, followed by the “&” of 3 and then the “&” of 4. I save the “&” of 1 for last because it requires starting the setup in the measure before the figure, potentially challenging for inexperienced drummers.

In Big Band for Figures Beginning on the Beat

To set up a figure starting on beat 2, stopping on beat 1 and leaving a space before playing beat 2 is a traditional approach. A drag, flam or even rolling into beat 2 can add some additional color, but stopping the beat before is very effective. (See Sample 2.)

In working with novice drummers, I have found that teaching beat 2 first is effective because stopping on beat 1 feels natural for many musicians. Once beat 2 becomes comfortable, I teach 3, then 4 — saving beat 1 for last. As with the offbeat figures, setting up beat 1 requires stopping in the bar before the figure, potentially tricky for some.

With small group jazz drumming, the figures are treated differently because, in general, the volume level of the group is lower than a full big band.

Many times, just lightly playing the exact figures with either the snare drum or bass drum gets the desired musical effect without setting them up. However, if the music calls for a figure to be set up, the same system I described for the big band works in a small group setting as well.

By playing the two eighth notes prior to an offbeat figure and stopping one quarter note before a figure on the beat, setting up and playing figures becomes an easy process. This system is also helpful when reading a chart for the first time as it provides a clear approach to playing the figures.

For those of you working with drummers, this system gives you a way to break down this skill into easy and repetitive tasks.

Ultimately, deciding how to approach figures in the drum chart is a collaborative process between the band leader and the drummer and should always be communicated openly. 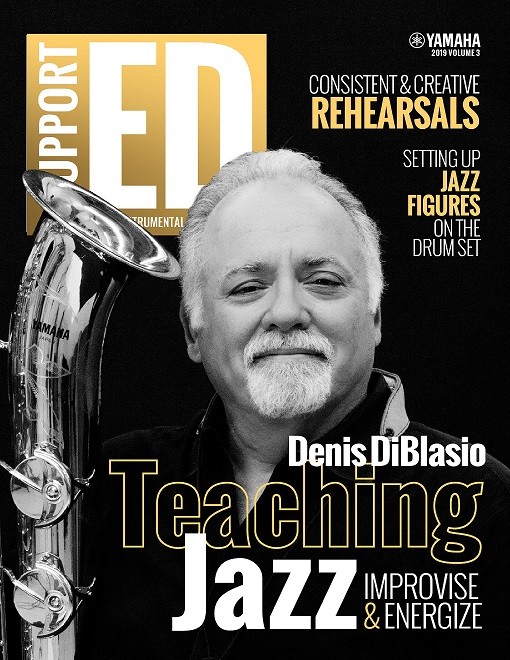