Pick the Right Drumsticks and Mallets

Percussionists have important factors to consider when choosing which sticks and mallets to include in their arsenal.

A percussionist’s gig bag brims with sticks, mallets, brushes, keys, heads and tape. When choosing the implements to include in their arsenal, drummers have important factors to consider.

The most important factor is a drumstick’s composition, says Dennis DeLucia, percussion instructor and member of the Drum Corps International, Percussive Arts Society and World Drum Corps halls of fame.

Players have a variety of options like wood, metal or synthetic compounds. Because drums are a  collection of metallic and skin surfaces, the implements used to strike those surfaces must be unbiased in their tactile feedback, says Tommy Igoe, drummer, educator and author.

Wooden sticks, long a favorite of most players, provide the neutral tactile feedback that drummers seek. By far the most popular wood choice is hickory, which allows the drumhead to respond at all dynamic levels, Igoe says.

Some drumstick manufacturers market and sell metal sticks. Igoe is not a fan. “Just cross them off your list,” he says. “Never use metal on a drum set or any drum.”

One school of thought suggests that metal sticks will improve a player’s strength, but that idea is a travesty, Igoe says. DeLucia agrees, saying he never considers them.

Although most players avoid metal sticks, there are some interesting wood stick made with a metal tip. “I’ve seen my students use this type of stick to go quickly from a snare drum to a cymbal and/or triangle in some multiple percussion and contemporary band literature,” says Sherry Rubins, senior lecturer and coordinator of the percussion program at the University of Texas at San Antonio.

Synthetic drumsticks last forever but are horrible to play with, Igoe says, because they do not offer a player the tactile feedback of a wooden stick.

Some sticks are fashioned out of wood, then chemically treated with a liquid plastic. This process renders a more durable stick but adds weight. “Most people, if they use them at all, use them as a warmup stick,” DeLucia says.

Drummers playing in wind and percussion ensembles need to fill their gig bags with a variety of sticks and mallets, Rubins says. Some literature requires percussionists to switch from one stick to another quickly during a performance, so sticks that perform double duty are invaluable. “There are some sticks that are a marimba mallet on one end [with] a round, wooden end on the other,” Rubins says.

No player should be without a good set of concert sticks and an implement with both a soft end and a beaded end. Players also need an implement for toms and one for intricate parts on the bass drum.

Variety is not limited to indoor ensembles. Marching snare drummers should also have a number of implements in their stick bags. They should carry two sets of marching sticks as well as a set of brushes. Some marchers like to carry a set of concert sticks, which are typically shorter and thinner than marching sticks, DeLucia says. 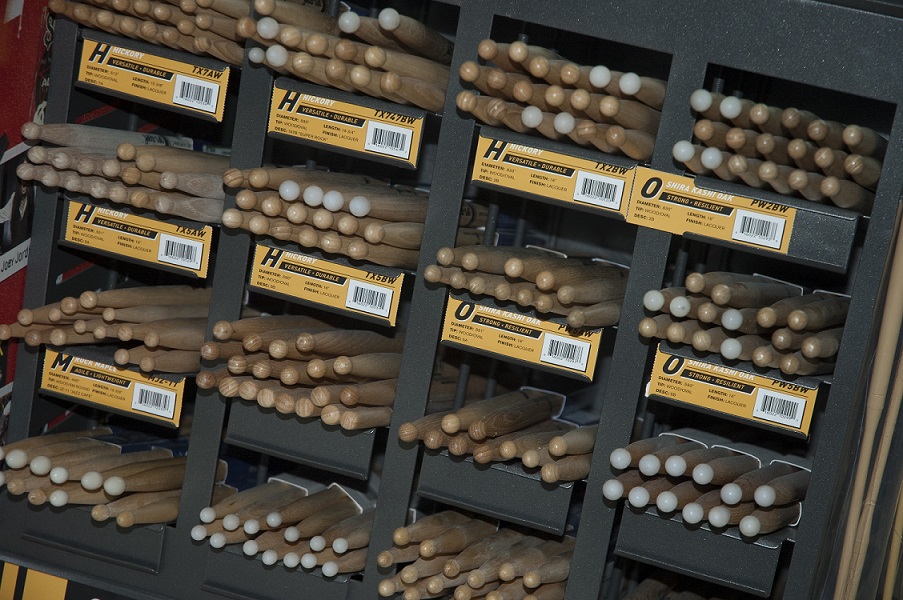 The Right Tool for Each Player

Drumsticks are typically categorized by a letter and a number, such as 7A or 5B, to indicate weight and diameter. Historically, “A” models were drum set sticks, “B” were concert sticks, and “S” were for street, or marching, use.

“While that nomenclature still exists with some manufacturers, there are also many variations and ‘artist models.’ You must read the description of the stick, so you can choose a pair that matches the style, student and instrument,” DeLucia says.

A common problem is when students use sticks that are too large for the context in which they’re performing, Igoe says. For middle schoolers and students with smaller hands, Igoe recommends a 7A stick, which is 15.5 inches long and has a diameter of .540 inches.

DeLucia agrees. Students ages 9 to 11 should use sticks that are short enough and light enough for them to handle. Players in the same drumline can vary in the size of their sticks. “You need to find a stick that works best for each individual player.”

Igoe encourages band directors to listen intently to the sound of the drums in an ensemble. If they’re not getting the sound they want, the students are using sticks that are too large, he adds.

“I want those band directors to feel empowered to recommend that 7A or 5A stick,” Igoe says. “They’ll notice a more pleasing sound immediately rather than what can be an ugly sound coming off the instrument when the implements are too large.”

This article originally appeared in the 2020N2 issue of Yamaha SupportED. To see more back issues, find out about Yamaha resources for music educators, or sign up to be notified when the next issue is available, click here.