Band directors for Denison High School and Middle School in Iowa noted the growing Hispanic population in the area and brought its culture and music into the classroom.

Every spring, Denison (Iowa) High School hosts a fiesta, including a taco truck, chips and salsa, and parents’ homemade desserts. But the main attraction is the Denison High School Mariachi Band.

Because half of Denison’s population is Latino, Denison High School band director Ruben Newell and Denison Middle School band director Patti Bekkerus decided that they needed a music program to embrace those students’ cultural backgrounds. “The Hispanic [students] in this town [have] always had a great passion for music,” Bekkerus says. “This was a way for us to extend a hand and say, ‘We want to share a part of your culture with everybody else.'” 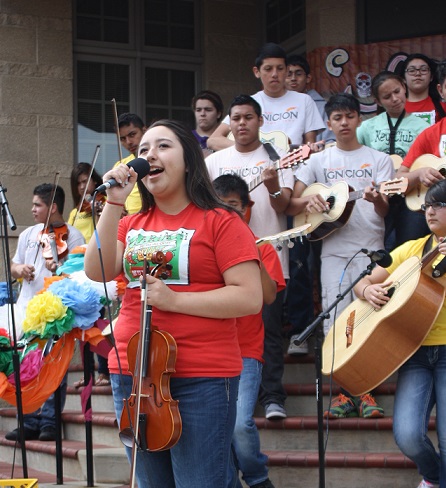 Newell, who became the band director in 2009, wanted to make sure his music program represented the diversity of his musicians. “I wanted to be proactive, so I started looking at schools in other states where diversity is more common,” he says.

Newell found that many of these schools had mariachi programs. At first, he was uncertain about his ability to start one himself. “I thought, ‘What other towns in the Midwest have a mariachi program?'” he says. “I kind of gave up on the idea. I didn’t know anything about mariachi, and there was no one I could talk to about it.

While at an Iowa Business Conference, Newell and Bekkerus attended a clinic about starting a mariachi group by Marcia Neel, president of Music Education Consultants and senior director of education for Yamaha. They soon learned that Neel was hosting the weeklong National Mariachi Worksops for Educators in Las Vegas later that year.

Newell and Bekkerus flew out for the event where they learned how serious and diverse the genre of mariachi can be.

When starting the mariachi program back home, Newell and Bekkerus soon encountered a new hurdle: Denison did not have a strings program, so very few students knew how to play violins, guitars and other instruments associated with mariachi — nor did the school own the instruments. Their superintendent Mike Pardun came to the rescue. “[He] said, ‘We are not going to let finances be a hurdle to them; that defeats the purpose,'” recalls Newell.

Pardun funded the purchase of six violins, five guitars, and a guitarrón, which is similar to a bass guitar. Newell and Bekkerus started the mariachi program with eighth graders to ensure that students would enter high school with some experience the following year.

After a successful first school year of mariachi in 2011-2012, the educators set their sights on a new goal: improving the skills of the string players, many of whom were primarily brass or woodwind musicians. They found a local violinist Claudia Rihner.

When Rihner joined the Denison mariachi family, she specifically worked with the students on their aural skills. The students warm up with scales, first in unison, then in rounds, so they can listen for the intonation. Rihner also tells students to hum their parts before playing on their instruments, then asks them if their instruments sound in tune with what they just sang.

“As far as reading notes, they had a strong foundation,” Rihner says. “The hard thing was the mechanics of the instrument.” 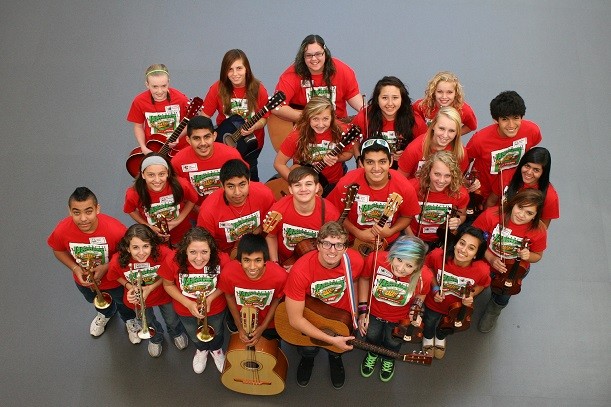 The larger high school group performs at local festivals and community celebrations. For the middle school program, the event of the year is Denison’s Fiesta Mariachi, the annual fundraiser where all three ensembles perform.

Starting in the program’s second year, Fiesta Mariachi raises money to buy instruments and trajes — traditional uniforms. The fundraiser has the added benefit of connecting family members. Parents attend an organizational meeting to plan the fundraiser, and the first year, Newell was surprised at the turnout. “There were a lot of families I had not met,” Newell says. “A lot of them didn’t speak English. I’d say something, and the students would translate. There was a lot of nervous energy there.”

To break the tension, Newell spoke in the one universal language other than music — food. After asking parents for food ideas to serve at the event, they began excitedly sharing suggestions. “It was incredible to see; it was something I had missed seeing in our district — families feeling comfortable in our school and excited about participating in events,” Newell says.

During the first year’s fundraiser, parents cooked all the food. Currently, a local Hispanic grocery store caters the event through a taco truck, but parents still bring in homemade desserts.

Newell remembers the first Fiesta Mariachi as one of his proudest moments with the music program. His parents even went to the event. “My mom took a bunch of pictures,” Newell says. “[She] said, ‘There was everybody there, all different kinds of people. All my pictures [show] everybody smiling.'”

Bekkerus and Rihner both cite the Fiesta Mariachi as one of the band’s most significant events of the year. “The mariachi program, in my eyes, has really bridged the gap between cultures,” Rihner says.

This article originally appeared in the 2018 V1 issue of Yamaha SupportED. To see more back issues, find out about Yamaha resources for music educators, or sign up to be notified when the next issue is available, click here.