Due to the pandemic, V.R. Eaton High School’s PASIC performance was first canceled, then was going to be virtual, then was postponed. But the percussion team finally performed at PASIC in 2021!

When V.R. Eaton High School in Haslet, Texas, opened its doors in 2015, director of percussion Matt Moore immediately started a percussion ensemble. In its inaugural year, the group of 11 went to the North Texas Percussion Festival and finished last.

Five years later in 2020, the then 40-member ensemble not only finished first at the same festival but was also invited to perform at the Percussive Arts Society International Convention (PASIC), held in Indianapolis most Novembers, after being named a winner in the organization’s International Percussion Ensemble Competition. Unfortunately, COVID-19 hit and shut down in-person schools in the United States. Since then, Moore and his co-teacher, Luke Vogt, have prepped — over and over again — for its PASIC appearance. 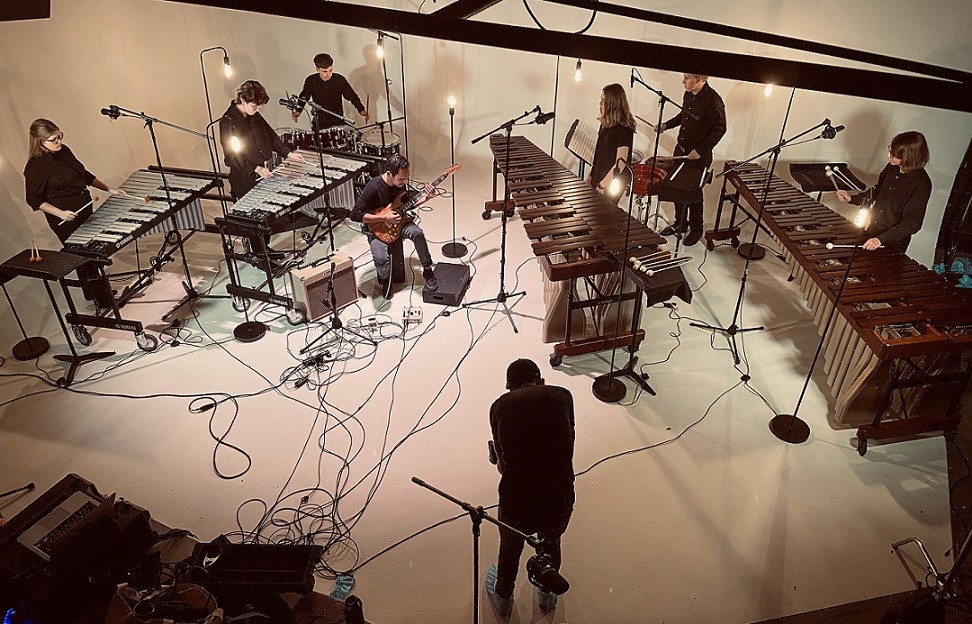 Moore feels passionate about percussion ensemble as a relatively new genre. “We’re in the golden age of concert percussion composition right now,” Moore says. “A lot of the best music written for the art form is coming out every year.”

In addition, Moore says that percussion ensemble complements the already competitive fall marching season, especially for Eaton High School, a 6A school in Texas with more than 200 participants. “Marching percussion is fun for the performers and fun to teach, and it’s very much art, but there’s also a heavy athletic side,” Moore says. “Percussion ensemble is just art. Coaching an athletic activity goes away, and we get to be only musicians. … I enjoy having both. … it’s an incredible thing to dive deep into the marching arts and then shift focus and just experience this pure musical art form and develop it with my students.”

The diversity of the genre allows Moore’s students to prep about 25 pieces for its spring concert without overwhelming the group. Often, upperclassmen are chosen to participate in smaller subsets and at festivals. Moore’s ensemble often collaborates with other departments, including strings, choir and dance.

Each student, often playing an individual part, must be confident and independent with “dynamically changing listening responsibilities around the group,” Moore says. “We enjoy developing that.” 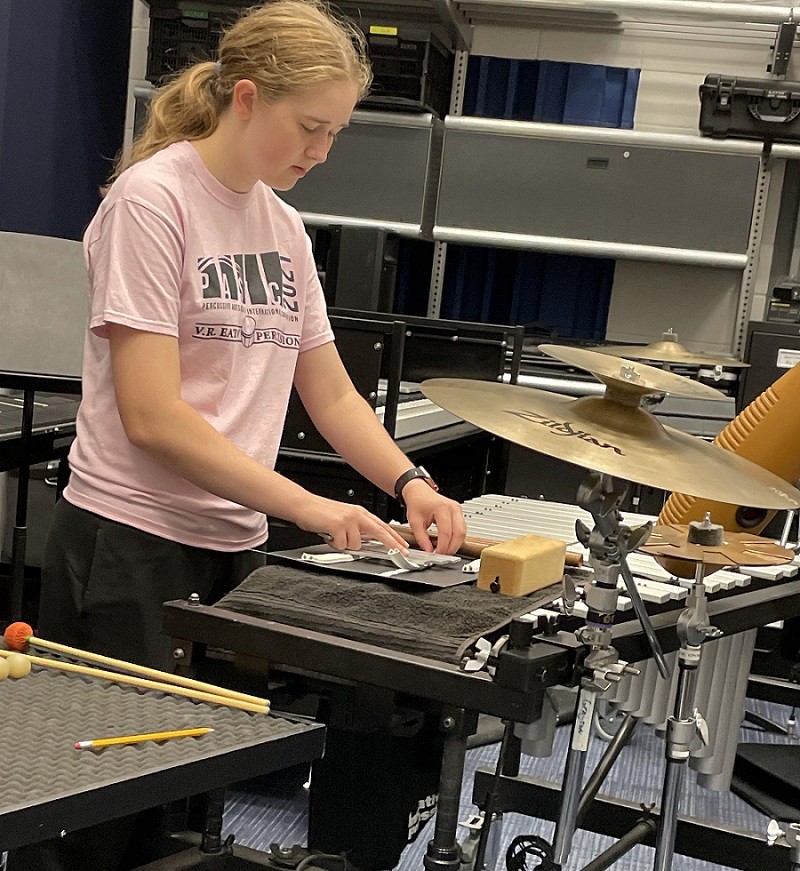 Moore grew Eaton’s percussion ensemble, which meets between the end of November to mid-March, partly from the organic expansion of the school. As the third high school in the Northwest Independent School District, Eaton began with only freshmen and sophomores and added higher grades as students moved up. As the program increased in size and the students improved in ability, Moore added more opportunities. In 2018 and 2019, Eaton hosted its own festival in addition to participating in the North Texas Percussion Festival. And in 2019, the group submitted a video to the Black Swamp Percussion (BSP) Ensemble Showcase.

Moore grounded his students on striving for musical excellence rather than specific achievements. “Competitive success is never our goal,” he says. “We’ve talked about that from the very first day in 2015, and we talk about that every school year. We are not a program that’s in it for trophies. We’re not trying to win stuff.”

Moore typically starts each season with a casual meeting to watch some videos of top high school groups. During the 2018-2019 school year, “I remember asking [the students]: ‘Do you want to play at this level? I think we can.’ The answer was a resounding ‘Yes!’”

That year, the percussion ensemble played upper-level collegiate literature and achieved second place in the high school large percussion ensemble division in the BSP Percussion Ensemble Showcase. “For us, that was our moment of discovering that maybe we can play these kinds of pieces in a way that is on level with the groups we’ve been looking up to,” Moore says.

In 2020, Eaton won the North Texas Percussion Festival for high school large group on the weekend that started spring break in early March. “This festival was the very last in-person thing that anybody did [before COVID shutdowns],” Moore says.

With song selections overall, Moore often focuses on how the sound matches his group and how the pieces can educationally help his students stretch their skills.

In June, Moore learned that his ensemble was named one of three high school winners. PASIC also selected three college groups and one junior high group. “We got all the kids together on a Zoom call and shared the news,” he says.

Moore’s team immediately began creating different scenarios for how they could make PASIC 2020 fit into the ensemble’s plans during the middle of a pandemic. But just a few weeks later, on July 1, 2020, the Percussive Arts Society (PAS) announced that PASIC would be fully virtual. Instead of being featured in a 50-minute performance, the group was asked to submit a recording. “Our plan last summer was to have this really cool experience and make the most of it without complex in-person demands from our kids.”

As a composer himself, Moore had written a marimba choir piece, titled “Together,” to help musicians get through the early days of the pandemic. Moore had posted the composition on social media and requested video submissions. With 111 submissions from middle school to adult performers, including some Eaton High School students, the song was produced into a compiled video by Cameron Sather and aired on YouTube on April 27, 2020.

For Eaton’s PASIC virtual performance, Moore planned to record and submit “Together.” Throughout the summer, Moore brought in groups of students — the soprano line, the alto line, tenor line, bass line — to rehearse and record in groups. “Because of COVID restrictions, we didn’t want to get all of our kids together physically in person.”

But Moore also decided to add something more — spoken word — so he commissioned poetry by Rosemerry Wahtola Trommer to match the emotional waves of the piece. The poem was then performed by a student from Eaton’s theater department. But the overall project was scratched and never fully produced when PAS canceled the winners’ virtual performances.

A group of directors from the winning groups appealed to PAS to postpone their performances to November 2021, and PAS agreed. So, Moore’s team went back to the drawing board.

“For a time, … we were planning on not [doing PASIC for 2021] …, especially coming out of such a weird year,” Moore says. “We wanted to just have a normal experience this fall.”

In addition, all except one student from the winning submission video had matriculated from the school. “I did have one freshman in ‘Crown of Thorns,’ and she’s the only one who will get to play at PASIC because everyone else graduated,” he says.

But seeing the resilience and strengths of his students persuaded Moore to push forward. In 2021, the group participated in indoor drumline competitions for the first time and became a finalist in the virtual WGI Sport of the Arts Scholastic A Class competition. “Since we didn’t have a proper fall marching season, we didn’t have any band competitions, and we didn’t put together a show. … None of our band kids had that ‘season’ experience that’s so engaging for the students and we felt we needed to add it in the winter. … What sealed the deal [to do PASIC] was how well the kids performed at indoor drumline. They did such a good job.” 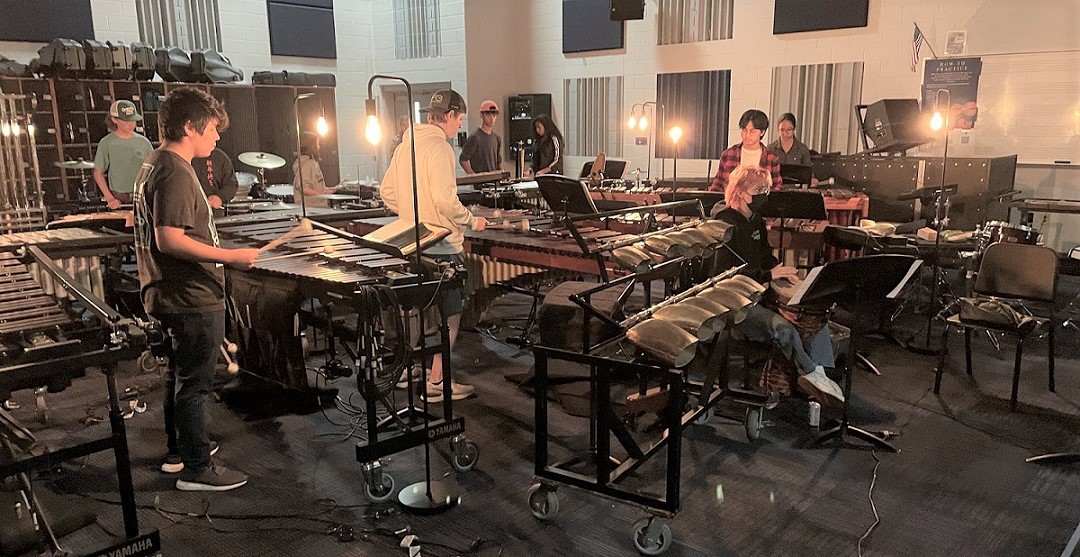 By April 2021, Moore accepted the invitation to perform at PASIC in November. Since groups typically don’t find out about PASIC performances until the summertime, he now felt ahead of the game. But Moore made a pact with himself and the other directors to maintain a work/life balance while preparing for the high-profile show in the percussion ensemble’s off-season.

“There’s a big problem with burnout in our profession,” Moore says. “I have a family — my wife and a 5-year-old daughter. I decided pretty early on that if we were going to do PASIC, [preparations] would be done during the hours we already have allocated to band.”

While Eaton normally focuses completely on marching band in the summer and fall, Moore simultaneously passed out percussion ensemble pieces for the PASIC performance in May. During its typical June percussion camp, then full summer band camp in August and during the regular season, he split the students’ time between marching rehearsal and percussion ensemble rehearsal. “The students have risen to the challenge nicely of balancing the workload,” Moore says. “We’re building a rehearsal schedule that does not go beyond what we normally do. But I’m pulling kids out of marching rehearsal all the time. I have a very supportive team.”

Moore and Vogt have crafted a 45-minute PASIC 2021 concert that he describes as “collaborative, flowing and fresh.” With a mix of smaller groupings to larger percussion orchestra, the program brings together all of Eaton’s 33 percussion ensemble members plus seven string players and five dance (color guard) students performing seven songs, each with a distinct sound and purpose.

“The history of our program has been highly collaborative, and I wanted our programming at PASIC to reflect us, to feel like us and to sound like us,” Moore says. “We’re bringing our entire program, which is atypical. Often groups will just bring their top students. Especially with the reduced opportunities that our kids have had over the past year and half, I wanted to find a way to bring everyone.”

The students will finally get to perform Moore’s piece “Together,” including the spoken word recording, plus another of Moore’s songs, “Vector,” that leans heavily on electronic instruments. The piece is fitting, considering that in 2020, Moore and Vogt co-founded Waveform Percussion, which brings electronic media into percussion education.

Several other pieces are existing repertoire from other composers that have been performed by prominent professional percussion ensembles, such as Third Coast Percussion.

In addition, Eaton commissioned a song by percussionist Ivan Trevino titled “A Spiral Made of Wires,” which has a pop/post-rock influence and includes electric guitar. Though the two didn’t know each other previously, Trevino accepted Moore’s invitation to meet the group at PASIC to premiere the piece as a guest performer on his electric guitar. 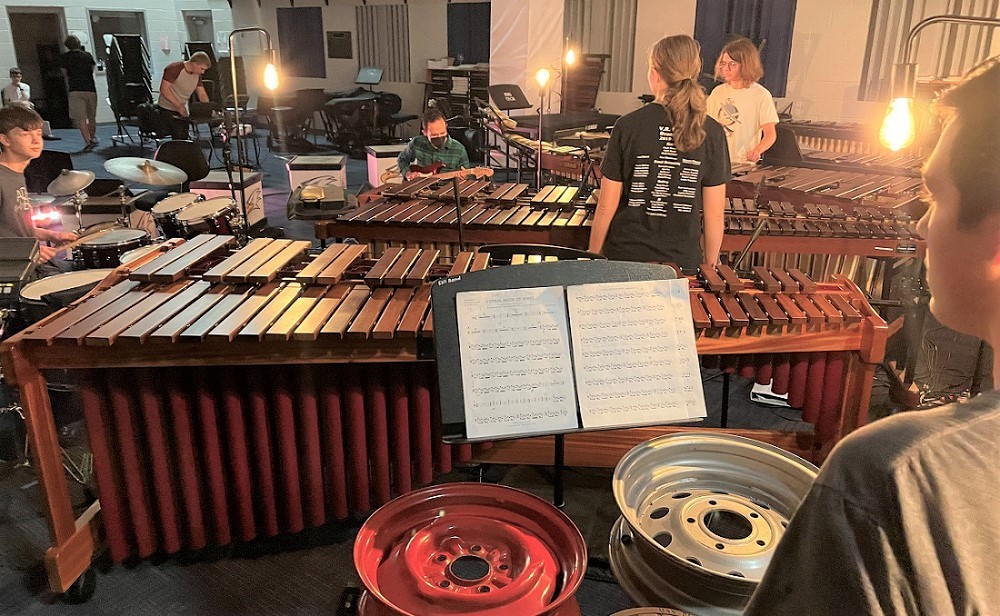 “It’s common to commission new works,” Moore says. “In fact, PAS encourages it. … There’s a name that probably every high school percussionists in the country knows, and that’s Ivan Trevino. As soon as I knew that we had won PASIC, Ivan was my first reach-out. … He writes this amazing, very listenable music that’s at a perfect ability level for our kids. It’s the kind of music where you listen to it one time and you think it’s amazing. But it has this musical depth where you rehearse it for months and still find new layers.”

As far as travel, percussion ensembles by nature involve a lot of logistics and gear with students often having their own setup that is different for each piece. With PASIC providing a specific stage size, Moore has taped off an area in the percussion room to accommodate the space that they will be given. “We started with the music and not thinking about logistics at all,” Moore says. “Now we are to the part of the year that we’re trying to consolidate our setups …, so the audience doesn’t have to watch kids awkwardly move instruments around.” 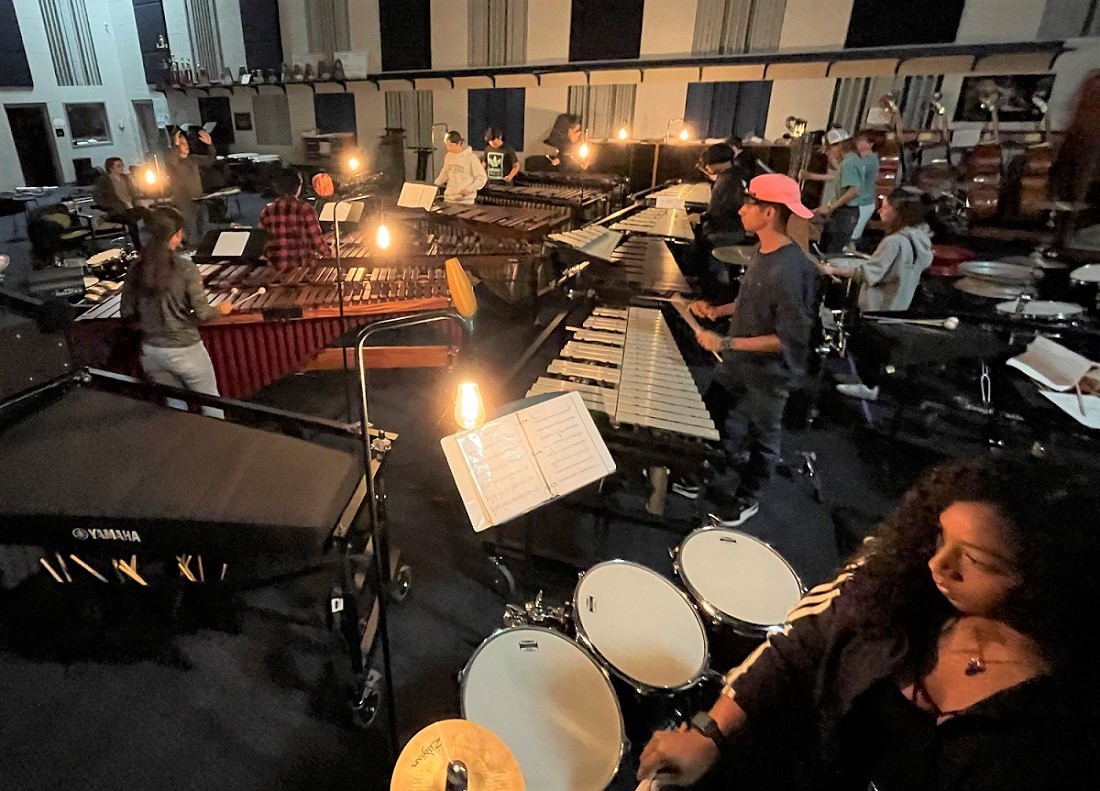