40 Under 40
Bryson Finney
We Are Nashville Festival

Case Study: The Growth of the We Are Nashville Festival

An idea between local music teachers turned into music festival that brings together students, performing artists and arts organizations.

Hundreds of elementary, middle and high school musicians eagerly look out over the crowd of the Schermerhorn Symphony Center, home of the Nashville Symphony. These students have spent months preparing for this day and their hard work is about to pay off.

Choral performers climb to the loft, while instrumental musicians find their places onstage. The crowd murmurs excitedly; it’s packed with proud families and members of the community.

This is the We Are Nashville Festival, and the person behind the curtain, making sure everything goes as smoothly as possible, is Bryson Finney — artistic director of the festival. 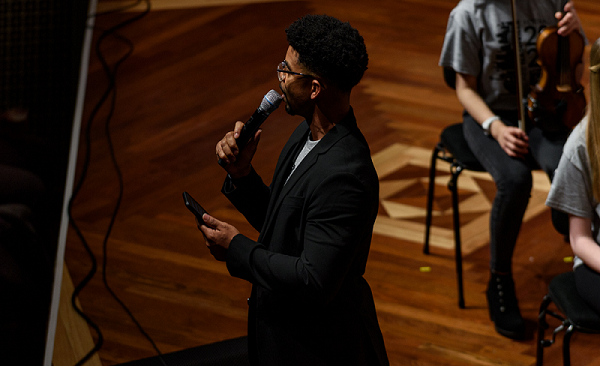 The We Are Nashville Festival just celebrated its fifth year, and while today, it’s made up of hundreds of students, as well as partnering artists and arts organizations from around the city, the festival looked very different just five years ago.

The festival began as an idea between Finney and other local music teachers. Finney’s school administration at Cole Elementary where he served as the music educator, had connected him with Dr. Kevin Stacy, the current director of the English language learners department, and Dr. Nola Jones, the director of the visual and performing arts department, for Metro Nashville Public Schools. These educators were interested in finding a way to highlight diversity through music within the district. At the time, Finney was working with a widely diverse student population and had just put out a CD showcasing his elementary choir, and they were interested in his thoughts.

Finney left the meeting excited to find a way to make it happen. It took months of brainstorming between Finney and five of his fellow music educators — Christopher Blackmon, Franklin Willis, Ann Marie Morris, Kathryn Affainie and Nita Smith — before the idea of the festival took form. 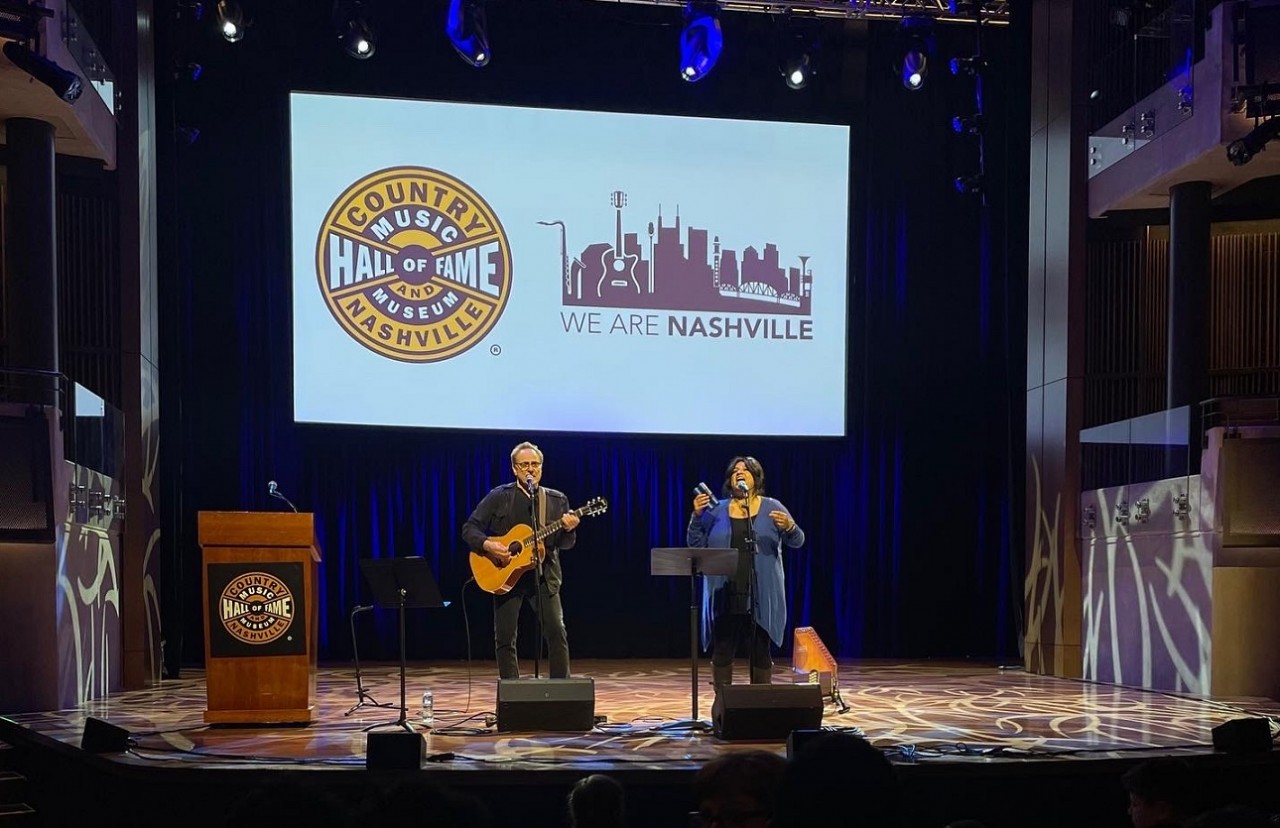 The first We Are Nashville Festival took place in 2018 at Christ Church Nashville and consisted of students from three elementary schools and one middle school. The group sang “We Are Nashville,” a song Finney had written two months earlier. “That song caught the ear of the community and that’s the reason it grew,” Finney says. “I just knew we had to do the festival again.”

The following year, the number of interested schools jumped to nine, and Finney needed a larger performance area. Finney went on a hunt to find a venue that could house the event, but he was having trouble finding a space. After searching all around Nashville, he approached organizers at Blair School of Music located on the campus of Vanderbilt University, who loved the idea of the festival. They gave him full use of the building, and through a budding partnership with the Country Music Hall of Fame a plan was developed to support by bringing over artists to teach and perform at the festival. This festival structure — a large performance venue and local artists leading workshops — solidified the future of what the festival would look like.

Changes During the Pandemic

In 2020, the festival became a program of Choral Arts Link, an arts and community focused non-profit in the Nashville area. This move and partnership with non-profit director Margaret Campbelle-Holmon was vital for the festival as it continued to grow. During this same year, the festival was planned for March 3, but Nashville was faced with a major tornado, so Finney moved the date to March 28, but he then had to cancel the event due to COVID-19.

After the cancellation, Titus Underwood, the principal oboist for the Nashville Symphony, reached out to Finney with an idea to make a video of “We Are Nashville,” the song Finney had written for the 2018 festival. The song was previously performed in 2019 and 2020 by the Nashville Symphony during the annual Let Freedom Sing Concert. Finney asked the music teachers who were scheduled to go to the festival to provide as many videos of their students performing the song as possible. Other community-based groups were excited about the idea and wanted to join in as well. The resulting video was a collaboration between the Metro Nashville Public Schools, Nashville Symphony, the Nashville Symphony’s Accelerando students, Nashville Ballet and the Voices of Vision Community Choir. The video would go on to win the 2021 Midsouth Regional Emmy® award and further propel the We Are Nashville Festival into the community’s consciousness.

With the pandemic still raging in 2021, Finney knew that the festival would need to be all digital, which he was excited to explore. Finney works as a Learning Technology Specialist for Metro Nashville Public Schools and assists educators with successfully integrating technology into their instruction. So, he interviewed local artists and music directors and provided digital resources for students and teachers.

In 2022, the festival was back to being in-person and accomplished its biggest show yet. Finney had built strong relationships with members of the Nashville Symphony and thanks to the valued partnership with Kimbery McLemore, vice president of education and community engagment, the show took place at the symphony’s home, the Schermerhorn Symphony Center. Students from 11 schools participated, along with Vanderbilt University’s Philharmonia Youth Orchestra and Nashville Symphony’s Accelerando Program. In total, there were more than 300 orchestral and choral musicians participating in the festival. “I think we definitely met our goal, building community through music,” Finney says.

The We Are Nashville Festival may take place over the course of a single day in March, but the preparation and planning begins much earlier. Finney spends months organizing and preparing for the day, with some festival planning beginning just a few weeks after the previous festival has ended.

Finney wants “everything to be concrete by August” because educators can apply to be part of the festival beginning in September. For the next few months, Finney meets with interested educators to go over the meaning behind the festival and what will be expected of them. Finney and his team finalize the roster of schools in December and distribute the music that will be played at the festival. The next three months are nonstop for Finney, with logistical operations being finalized, including sending in the stage layout. The morning of the festival in March is the culmination of a year’s worth of time, dedication and planning. And the day is just getting started.

The Day of the Festival

Student arrivals at the festival are staggered with elementary school students arriving first. “Their day begins with rehearsals, and then they’re immersed into a general music experience,” Finney says, with students being introduced to different types of music, dance and even exploring music through visual arts and crafts. Finney recruits local Nashville artists to lead these workshops, further driving home his message of community and togetherness. Finney thinks that it’s crucial to introduce elementary school students to different paths that they can take in music. 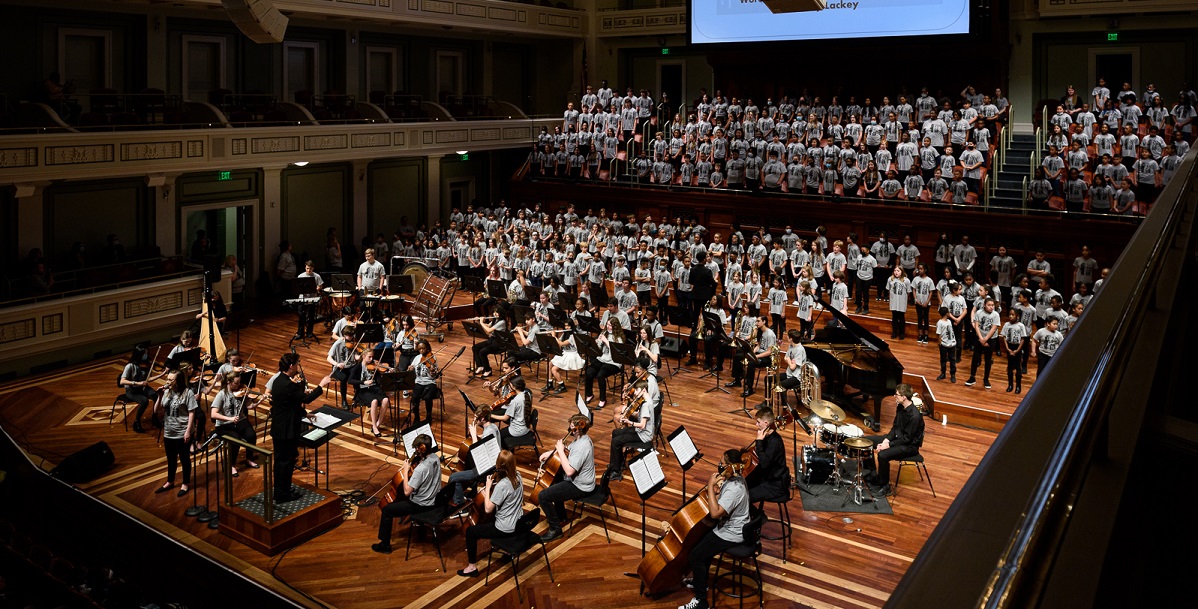 While elementary school students are in their general music experience, middle school and high school students arrive to practice and take workshops of their own. Then, they break apart and begin practicing their music in sectionals and tier-based rehearsals before coming back together for dinner. During dinner, the We Are Nashville student orchestra made-up of high school students from all over the Nashville area, begin their final run-through of music before the final dress rehearsal and show.

Finney is quick to acknowledge that the success of the festival is due, in large part, to the hard work of the teachers. “The music educators run this show,” he says. “They’re conducting. They’re even writing the songs, and 40% of the music was original this year.” Finney says his goal is to have that growth continue. “I want as much original music as possible, highlighting the talent of music educator in this city” he says.

The Heart of the Festival

Finney, a 2022 Yamaha “40 Under 40” music educator,  is passionate about making sure that even as the festival grows, the core of the festival remains the same — through community showing students what’s possible with music and what they can do.

“The festival is definitely centered around exposure,” Finney says. “Children need to be exposed before they can dream of what they can become.”

In the spirit of that goal, Finney believes that there are three elements that the festival offers to help students envision their futures in music — see, identify and participate.

First, Finney wants students to be able to see where music can take them. He says it’s important for students to meet local Nashville artists and the Nashville Symphony musicians and know that there are paths open to them in music.

Next, Finney wants that exposure to turn into identification. “I want students to be able to build some type of relationship with what they’ve seen,” he says. 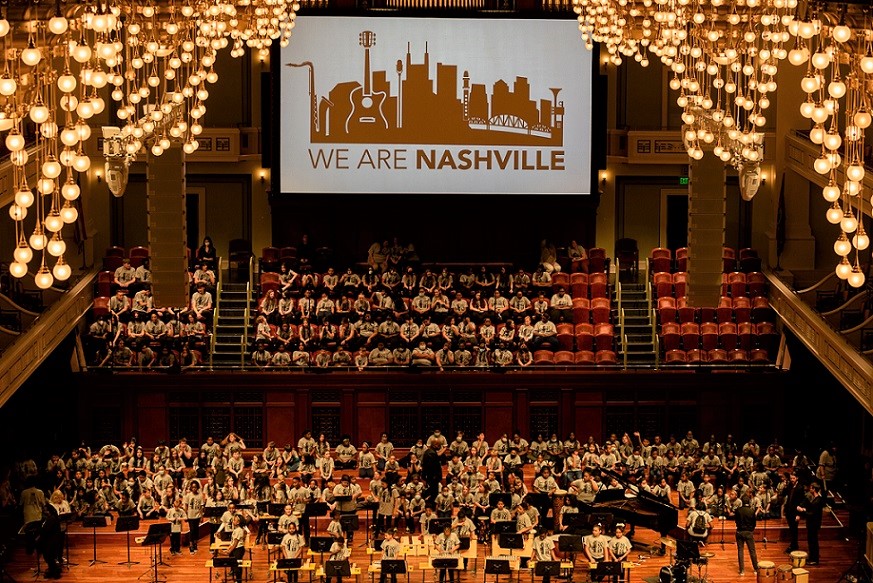 He hopes that the elementary school students can look at the middle and high school students and envision themselves in their positions. Finney says that he receives feedback from teachers who say that their students want to join the middle school or high school orchestra or choir because they saw them perform at the festival. For Finney, that is what the festival is all about. He says it’s important for students to realize that “they’re just like me, or they look just like me, and they’re doing something I would love to do,” he says.

Lastly, Finney wants students to feel like they are participating in something unique, which they might not have a chance to do otherwise. Being able to perform at the festival in “this big, beautiful performance hall with local Nashville artists, as well as your peers, is key to the success of the festival,” he says.

This exposure and participation make up the heart of the festival. “After those three elements — I’ve seen it, I can identify with it and I’ve participated —kids can dream and have the ingredients to know that this is what they really want to do,” Finney says.

Looking to the Future

Finney is thrilled with the success the festival has had since its inception, but he still sees room for growth.

“I would love for it to become a week-long event where the festival is the launch, but resources are available all week,” Finney says. He envisions the week including local musicians visiting schools for workshops and performing for students and their families as a way of encouraging the community to come together through music.

Regardless of how big the festival grows, Finney says that it’s important to keep community and exposure at the festival’s core. He says one of the most impactful parts of the festival is when teachers see their former students performing with the middle or high school groups. That desire to reconnect solidifies the community-based nature of the festival. Or, in the words of Finney’s award-winning song: “Hand in hand, together we will stand, we are Nashville.”