Imagine a director asking, “Can you make your sound move the same way you moved your arms?” 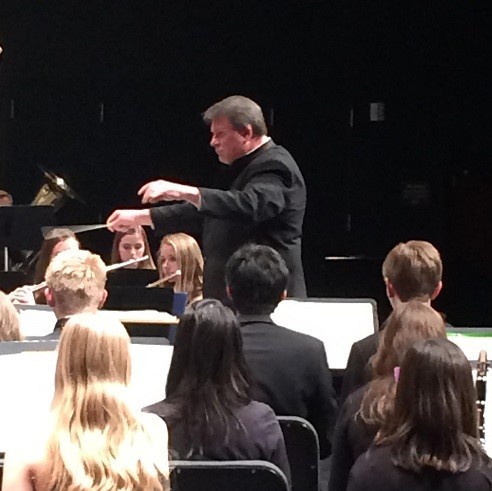 Earlier in the rehearsal, the director showed students how to indicate the dynamics of forte with wide, sweeping motions and piano with smaller, more nuanced wrist flicks.

Most students never get to experience the musical and personal development that results from conducting an ensemble. Conducting is a skill often reserved for student leaders, particularly drum majors, or postponed until college. However, teaching conducting techniques within high school and even middle school music ensembles can improve students’ general musicality.

“[Conducting] can give an opportunity for them to see outside themselves a bit more,” says Montclair (New Jersey) State University Director of Bands Dr. Thomas McCauley. “That’s the goal of every teacher of every large ensemble — [doing] an activity that would help [students] realize that there are things going on beyond them playing notes.”

Giving students the opportunity to conduct the ensemble helps them develop confidence and leadership abilities that can be applied to everyday life. “This kind of exposure to what it takes to be a leader, the passionate commitment and the ability to communicate, not just word to brain but heart to heart, is truly effective,” McCauley says.

Stick to the Basics

Start students with the basic movements of conducting: large arm movements, posture and dynamic indications. “The basics of conducting are not complicated,” says McCauley, who taught high school for nine years prior to taking on several university positions. “There are a few simple patterns that one must memorize.”

Although conducting styles go further than marching band, simple two-handed drum major conducting in familiar time signatures such as 4/4 can help students understand the foundation. Do not delve too deeply into the details of conducting technique, McCauley advises; instead, the lessons should be more introductory. “The teaching of actual conducting to high schoolers is more like giving them a taste of what it’s like,” he says. “You’re exposing them to what a conductor does and what it’s like to do it.”

Move with the Music

In addition to conducting, teaching students to move with the music can help them develop musicality. “What we’re really trying to do is take the intricacies out of playing for a moment and have [students] engage with the music using large muscle groups,” says McCauley, who founded the University of Indianapolis Orchestra Festival and Festival of Winds for high school students.

Because both instrumental and vocal music require finely tuned, small muscle movements, using a broader spectrum of body movement — such as shoulder swaying and head nodding — helps students better understand the “shape” of the music and communicate nonverbally with the musicians around them. For example, chamber musicians use body motions to play together, even without a conductor.

Conducting lessons can be made relevant to the general ensemble rehearsal by integrating them into the curriculum. “It’s another tool, another avenue, another pathway to help students understand not just intellectually but also physically, emotionally [and] spiritually what it is we’re trying to accomplish with a phrase or a dynamic marking,” McCauley says.

He recommends using conducting lessons to break up rehearsals. “When the students might need a break anyway, and you’re trying to make a point, it’s time to truly engage them and have them try to replicate what you’re doing on the podium,” he says. “It’s something physical you can refer to for the rest of rehearsal [and] use as a way to develop the music.”

Think of the Future

Learning conducting techniques will help students not only in their high school music careers but also in their college educations and career pursuits, regardless of whether conducting is an active aspect of their journeys.

“Obviously, if they’re going to be teachers, it’s a good way to introduce them to the idea of listening and being aware and movement,” McCauley says. “It’ll certainly give them a bit of a leg up before they show up to the first day of basic conducting. Even if they’re going into music therapy or composition or jazz or performance, these kinds of tools can only help them, even if they don’t use them every day.”