Hard to believe another year has flown by, but it’s NAMM time once again! Every January, the entire musical instruments industry — manufacturers, dealers, artists, fans and the merely curious — convenes in Anaheim, California for the annual event.

If you aren’t able to make it to this year’s show, here are some of the hottest new offerings from Yamaha.

Reproducing authentic organ sound, control and expressiveness in a mobile package has long been a Holy Grail for keyboard players. The YC61 Stage Keyboard summons this spirit into the 21st century, with a newly developed Virtual Circuitry Modeling (VCM) tone generator that models the behavior of vintage electronics for an authentic tonewheel organ sound, along with a new VCM Rotary Speaker effect that replicates the two-speed spinning speaker typically used to amplify these organs. Organists will appreciate familiar controls such as drawbars and percussion switches, as well as the ability to customize “under the hood” parameters such as drawbar leakage, key click and rotor speed for an expressive and unique sound.

But the YC61 goes beyond organ sounds. Two comprehensive “Keys” sections offer authentic acoustic pianos, soulful electric pianos, realistic strings and brass, analog-style synths and more, plus dedicated effects like delay, chorus and distortion. And thanks to its aluminum construction, the YC61 is as rugged and roadworthy as it is light in weight — under 16 pounds! 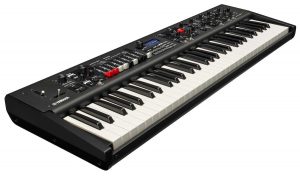 The SLB300SK Silent Bass leads the next generation of electric upright basses, with advancements that allow the bassist to control their sound with the press of a button. The original design of the Silent Bass gave players a true ergonomic feel by including all the touch points of an acoustic upright bass. Newly incorporated Studio Response Technology (SRT) allows the SLB300SK to model an acoustic bass played through different high-end acoustic microphones, ranging from the clear, warm sound of a dynamic microphone to the well-balanced rich timbre of classic vintage vacuum-tube microphones.

The SLB300SK can be broken down into an easily transportable “subway friendly” instrument that can be packed into a TSA case without fear of being damaged en route. It also allows the player to perform in places where they may have previously feared to bring an expensive acoustic instrument, such as an outdoor gig on a hot, humid day.

NAMM saw the debut of the NX Series of nylon-string acoustic-electric guitars. The three NTX models (NTX1, NTX3 and NTX5) are designed to make it easy for electric and steel-string acoustic guitar players to add the warmth and beauty of nylon-string sounds to their tonal palettes. They have slimmer bodies, shallower neck profiles, narrower fingerboards and longer necks than most classical guitars, providing a more familiar playing experience. The three NCX models (NCX1, NCX3, and NCX5) have classical-style neck profiles and fingerboards and are designed for experienced nylon-string players in search of superior amplified sound. 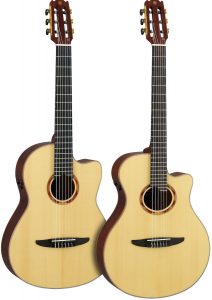 The new SBP0F4H Stage Custom Hip drum set is a compact version of the Yamaha Stage Custom Birch, one of the most popular venue backline kits the world over. Designed for use in multiple genres and by a wide variety of drummers (such as street performers, educators, hybrid players using DJ/electronic gear and home recording studio musicians), this set is also a great at-home practice solution with low volume setups. 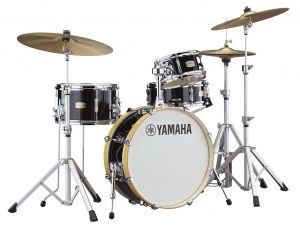 NAMM saw an announcement from Yamaha about several innovative upgrades to the company’s venerable P22 Upright Piano, which has been widely used by schools and music educators for nearly half a century. For one thing, a redesigned music rack area allows the entire width of the P22 to support sheet music — vital when an instructor or student is juggling multiple pieces. In addition, the fallboard now incorporates a soft-close mechanism to prevent dropping; instead, it slowly glides to the closed position even if someone attempts to slam it on purpose, thus protecting both errant fingers and the piano itself.

In addition, the P22 can now be fitted with optional Yamaha SC2 SILENT Piano technology, ideal for quiet practice or in a lab where multiple pianos are located in the same room. When activated, the sound no longer comes from the strings being struck but instead comes from a high-quality digital tone generator featuring the voices of the world-class Yamaha CFX and legendary Bösendorfer Imperial concert grand pianos, with accurate reproduction of all internal resonances, ensuring realism. The SC2 SILENT Piano system can also record performances internally or onto a USB thumb drive — a perfect way to evaluate students’ progress — and can interface to computers as well as the Yamaha Smart Pianist app. Dual headphone jacks make side-by-side practice possible, and the P22 SC2 can also output audio to a music lab system such as the Yamaha MLC-200. Incorporating both content and powerful features from the flagship Yamaha Genos Digital Workstation keyboard, the new PSR-SX700 and PSR-SX900 Arranger Workstation keyboards are affordable all-in-one instruments ideal for composing, arranging and performing. They offer a brilliant 7-inch color touchscreen, along with six assignable buttons and a joystick controller for maximum expressive possibilities. There’s instant access to a huge variety of international content, as well as new Voices and effects inherited from Genos. Arrangements created with the built-in 16-track sequencer can be output as studio-quality audio files that can be played back on smart devices or computers.

Yamaha intermediate baritone saxophones are used by thousands of schools in the United States and around the world. They have earned a stellar reputation for their outstanding playing characteristics, intonation and durability, and are sought after by scholastic marching, jazz and concert band programs. The YBS-480 Intermediate Baritone Saxophone unveiled at NAMM is the company’s first new baritone saxophone in 35 years.

The YBS-480 offers updated ergonomics to make it easier to hold. Also added is the ability to use a detachable peg, making the instrument more accessible to players of all sizes. The redesigned bore and neck are modeled after YBS-62 professional model Yamaha saxophones, which improve the intonation of the horn.

Intended to meet the critical demands of today’s top trumpet players, these instruments are celebrated for their responsive playing feel, nuanced sound characteristics and accurate, even intonation. The new Generation III models feature a redesigned two-piece construction valve casing, along with unified parts such as the water-key set-up and tuning slide radius. These design alterations create an improved upper register and sound throughout the range, and more stable intonation for players at all levels, especially those performing in the most critical situations. There are two Bb and three C models to choose from — the YTR-9335CHS III, YTR-9335NYS III, YTR-9445CHS III, YTR-9445NYS-YS III and YTR-9445NYS-YM III — making them ideal for a large variety of players, from those looking for a more modern style to those who prefer a more traditional feel and resistance.

These three new Yamaha THR-II desktop amplifiers provide guitarists with a perfect combination of professional-quality tones, convenient wireless operation, and stylish good looks — whether they are practicing, recording, or playing along with their favorite music. 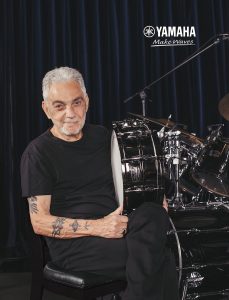 To celebrate this milestone, Yamaha and Gadd worked together to release a signature snare drum with a 14″ x 5.5″ steel shell and a new Steve Gadd 10-strand wire, which enhances the snare articulation. Limited to only 200 to be sold in the U.S., the drum’s steel shell exterior and aluminum die cast hoops are set in a distinctive black nickel. Additional features include a Steve Gadd signature badge that accompanies the shell, a black tuning key and a special certification card.

Yamaha also announced at NAMM that it is adding a white finish version for its powered DZR/DXS-XLF and passive CZR/CXS-XLF professional loudspeakers and subwoofers. These cabinets fit a broader range of sound system requirements, especially in spaces where aesthetics and design are equally important as sound coverage and performance, such as churches, museums and upscale environments like high-end retail or hospitality venues.

The DZR line of powered speakers, along with the DXS-XLF powered subwoofers, use high-performance components and the latest DSP to provide superior audio quality, with minimal latency and phase distortion. Both lines are available with optional Dante integration for flexible routing and easier system configuration and setup. The CZR series of passive speakers are ideal for installations using remote power amplifiers. Adding the companion CXS-XLF subwoofers extends a sound system’s bottom end down to 29Hz for bass-heavy content. All models are housed in a lightweight, durable, 15mm-thick plywood cabinet, coated with military-grade polyurea to withstand the rigors of travel, handling and weather.

See you at next year’s NAMM — and remember, if you can’t make the show in person, you can always catch the highlights here!

Click here to learn more about the full line of Yamaha products introduced at NAMM 2020.

Advice from Yamaha Master Educators: Remembering the Passion and Enthusiasm of a Beginning Trombone Player
The Sonic Experiment: Part 1