Play the CVP Clavinova the way that works for you.

One could make a very good case that a CVP Clavinova can be played in two basic ways: “like a piano” or “like an organ or keyboard.” Both methods are differentiated primarily by how the left hand is notated on the music score, and how the musician determines which notes the left hand will play. Your skills, playing style and musical genre will influence the approach you take. In this article, we’ll talk about how to best use the CVP Clavinova for your particular style of playing.

When a CVP Clavinova is played “like a piano,” both the right hand and left hands are often written out “note-for-note” in the music, as shown below. Each and every note is meticulously arranged for certain hands and fingers to play and is separated into treble and bass clefs – usually one clef for each hand. Notes can be played anywhere on the keyboard. 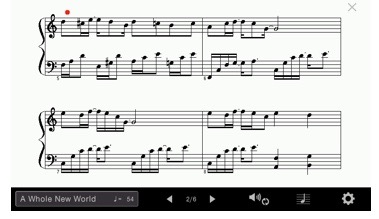 However, when the CVP Clavinova is played “like an organ or keyboard,” only the right hand is spelled out “note-for-note” and designated to play the melody. The left hand is only represented by a symbol. This symbol is called a “chord” and indicates a harmonic structure for the left hand to play. This method is often popular with hobbyists and jazz players, and is often in used in books called “fake books” where players are “faking” left hand by simply fingering a chord suggested in the music. People who “play by ear” usually don’t read music, but often play the piano in this fashion. Here is the same music notated with chord symbols for the left hand. 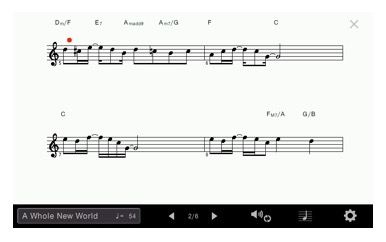 The CVP Clavinova enhances this method of playing by bringing those left-hand chords to life, using the chords to generate the sound of a full band or orchestra. These built-in patterns are called “Styles” (e.g. Big Band, Boss Nova or Swing), and are quite sophisticated. Many of the Styles are created by professional musicians familiar with that particular genre of music, often in other parts of the world. 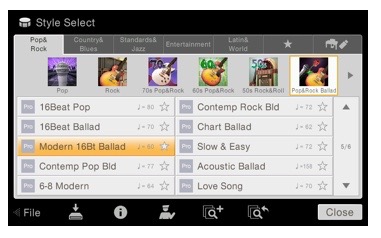 This “backing band” function is activated by turning on the ACMP button on the furthest point left on the panel, as shown in the photograph below.

When this button is activated, often a single LED light appears above one of the notes on the keyboard, somewhere near the center of the keyboard. This is referred to as the “split point.” The right hand (or melody) is intended to be played above this light on the keyboard, and the left-hand chords are intended to be played below this light. (Note that this split point may be moved if you find yourself running out of room on either side of the light.)

In the real world, there are many who play their instrument “like a piano,” but would like to take advantage of the amazing styles on a CVP Clavinova. These players are not necessarily familiar with reading those short-hand symbols or chords for the left hand (Cm7, G13, F#maj7, etc.). Furthermore, these types of players often don’t separate the hands in their minds as “melody in the right hand” and “chords in the left hand.” They simply play and create their music with BOTH hands, often over the entire range of the keyboard. The good news is that these types of players can still take advantage of Style play on a CVP Clavinova if they switch the ACMP mode to a special mode made just for them called “Full Keyboard” mode.

“Full keyboard” mode eliminates the single LED split point, indicating that the player is no longer required to separate the hands with right hand played above the light and the left hand below the light. Players are now able (and encouraged) to play ANYWHERE on the piano keyboard. As they play, the Clavinova figures out what harmonies they are playing using BOTH hands as input, and generates a chord from the notes being played to activate the Style section. (If you want to see what harmonies the Clavinova assumes you are playing, press the HOME button to view the various chords that appear in the Style area located on the left-hand portion of the HOME screen.) 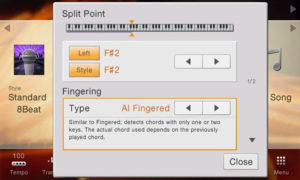 You will note that there is also a second choice for Full Keyboard mode called Full Keyboard AI. AI stands for “Artificial Intelligence,” which allows for different styles of playing. The regular “Full Keyboard” mode requires you to play a minimum of three notes for the chord detection to change chords, while the AI version does not require three notes to make a change.

Try both versions of Full Keyboard modes to see which one works best for your style of playing!