For parents and educators alike, there is a great deal of interest in how learning to play an instrument such as piano benefits a child. One benefit can simply be feeling the joy of making music and developing an appreciation of music. Another could be fostering a habit of practice and mastery that might transfer to other aspects of life. In some cases, playing an instrument can lead to other experiences, such as playing in an orchestra or even a career in music.

And then there’s the possibility that musical experience enhances the mind and brain of a child in ways that extend beyond music. This interest promoted a widely known misunderstanding called the “Mozart effect.” In 1993, three researchers reported in the prominent journal Nature that listening to a piece from Mozart — as opposed to relaxation or mere silence — temporarily enhanced the performance of one of several spatial reasoning tasks. Such was the public eagerness for musical experience to have benefits beyond music that popular accounts suggested that listening to classical music made people smarter, but the original finding was highly limited, and most researchers have been unable to replicate even those limited findings.

More careful science has asked whether adults with many years of experience in playing an instrument have enjoyed psychological benefits beyond music. At Stanford University, Dr. Nadine Gaab and I compared the ability of people with at least nine years of experience in playing an instrument (musicians) to people with little or no instrumental experience (non-musicians). Of course, the musicians knew a lot more about music, but we wanted to determine whether they also had superior abilities in hearing the sounds of spoken language by asking them to make challenging judgements about speech sounds like “ba” or “wa.” What we found was that musicians performed better than non-musicians only for speech sounds that demanded precise timing or temporal judgments. (Further, the more years that musicians had practiced their instruments, the greater the advantage relative to non-musicians.) But the musicians had no advantage in making other kinds of judgments about language sounds. We interpreted these findings as indicating that musical training may enhance precision in auditory temporal acuity that spontaneously generalizes from music to spoken language.

These and other similar findings indicate that playing an instrument may enhance specific abilities beyond music. But there was a catch related to the usual issue that correlation does not mean causation: Maybe it was not the experience of playing an instrument that made musicians more accurate at certain aspects of language, but instead it was something about the nature of people who played musical instruments that also made them better at certain aspects of language.

Consider a sports analogy. Being taller is helpful in being a good basketball player, but playing a lot of basketball does not make you taller. Maybe children with a better sense of timing are more likely to enjoy playing an instrument and therefore have additional motivation to continue to play an instrument. Maybe children with a better sense of timing play their instruments better, and therefore receive more positive encouragement from teachers and parents. Maybe parents who encourage their children to play instruments also tend to talk more with their children, or are more supportive in other ways, and thus foster timing skills in both music and language for entirely separate reasons. 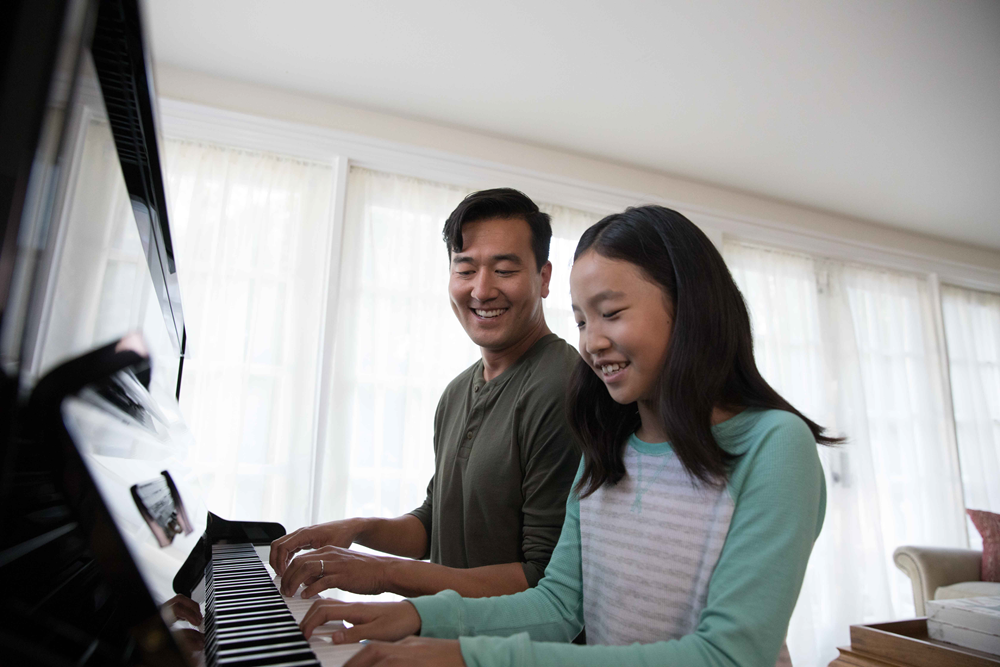 The only way to scientifically prove causality — to prove that it is the experience of playing an instrument that makes children better at certain aspects of hearing language — is a training study in which children without prior instrumental experience are randomly chosen to either be trained or not trained on playing an instrument. Any difference after the training must be caused by the experience of playing the instrument (a design known as a randomized controlled trial or RCT) because this design has eliminated any differences in initial talents or parenting.

Yun Nan, Robert Desimone, Chen Chen Gong, Eveline Geiser, and I (from the McGovern Institutes at MIT and Beijing Normal University) designed such a study, of 74 four-to-five year-old Mandarin-speaking children in China. The children in the musical group received six months of piano training, in a curriculum developed by Chen Chen Gong. The children in the reading group received an equal amount of reading instruction. For both groups, two experienced teachers taught 45-minute sessions, three times a week, delivered to small groups of four to six children. There was no extra practice outside of class. A third group received neither kind of instruction and served as a baseline group to demonstrate what happens without either extra piano or reading instruction. At the outset, the groups had similar scores on many measures of cognitive abilities (such as IQ scores) and came from similar socioeconomic backgrounds. Therefore, any differences after training were unlikely to reflect initial differences in talents or parenting.

Extra education — both piano and reading — improved accuracy in both hearing words and hearing vowels, relative to children who received neither instruction. This is already interesting, because the benefits from music (which has no direct relation to language) were similar to those from reading (which relates directly to language). But music provided an additional boost in language beyond reading. Children who practiced the piano outperformed the other groups of children on judgements about words when those judgements had to be made on the basis of consonants.

What was special about consonants (versus vowels)?  Probably it was all about timing (and thus similar to the findings from Stanford). Speech sounds (the small sounds within words) fly by rapidly as we hear spoken language. With every sound, we have to quickly judge what sound we heard, and whether we heard one sound versus another sound; the correct recognition of sounds empowers us to correctly know what word we have just heard. In this high-speed world, vowels have relatively longer durations, and this gives us a bit more time to judge whether we just heard an “a” or an “e” or “i”, etc. But consonants are merciless and give us almost no time at all. The difference between a “b” and a “d”, for example, depends on tiny fractions of a second of auditory information. As a result, consonants demand remarkable temporal precision to be heard correctly. And practice with the piano enhanced the discriminating of one word from another specifically on the basis of consonants.

The perceptual advantage from piano training was mirrored by a brain difference. Brain functions were indexed by “event related potentials” (or ERPs), which are electrical signals from the brain measured by electrodes placed on the skull. ERPs can measure brain responses to sounds (and other things) in milliseconds. After piano training, children who showed the greatest improvement on consonant-based word discrimination also showed the greatest enhancement of the brain ERP to musical pitches, thus linking expected brain gains from musical experience to gains in consonant perception in words:

These findings bring scientific precision to the question as to whether piano training provides benefits beyond musical experience. It appears that some of the auditory skills learned from piano playing enhance specific aspects of the perception of spoken language, even beyond that gained from additional experience in reading. At the same time, these benefits from piano instruction are quite specific, at least for the six months of training, since all three groups of children showed similar developmental growth on tests of IQ, working memory, and attention.