In Part 1 of this three-part article, we explored using inversions to connect your chords, as well as the use of some basic passing chords when playing in a pop or rock style of music. Now let’s add some interesting colors and movement to those concepts.

Adding a note a whole step above the root sounds great on most chords, and since that note is the second tone in both major and minor scales, it’s called a second:

You can add a second to a full triad, or replace the root with it:

Note: The last two measures show the inversions of both root position voicings.

This works well for many of the scale tone chords, but not all. Basically, if the added second note (called an “add2 voicing”) occurs in that particular key or scale, it will sound good, so it will work for all the scale tone chords except the third and seventh scale tone chords (E minor and B diminished in the key of C). Here’s an example that creates a nice melodic movement for each of those chords by moving from the added 2nd back to the root for each chord:

This next example gets a little more fancy with the movement between the root, the second and the third. Pay close attention to keeping the right hand notes sustained as notated — it’s a bit like a Hanon exercise in that regard:

A variant of the add2 voicing is to leave out the 3rd of the chord, and just play the root, 2nd and the 5th. This is called a sus2 chord, and it provides a really nice color. In the example below, it’s used to move into the major key triads, where it works best:

Another good tone for adding color to a triad is the 6th — a whole step above the fifth step of the scale. Anywhere that a song calls for a major triad, you can opt to make it a major sixth chord instead. But you can also use it to create movement, by switching between the fifth and the sixth in your chord voicings (see bars 3 – 8 in the example below):

If this next example sounds familiar, it’s because this is a common way to voice chords when playing classic rock and roll tunes from the ’50s and ’60s: 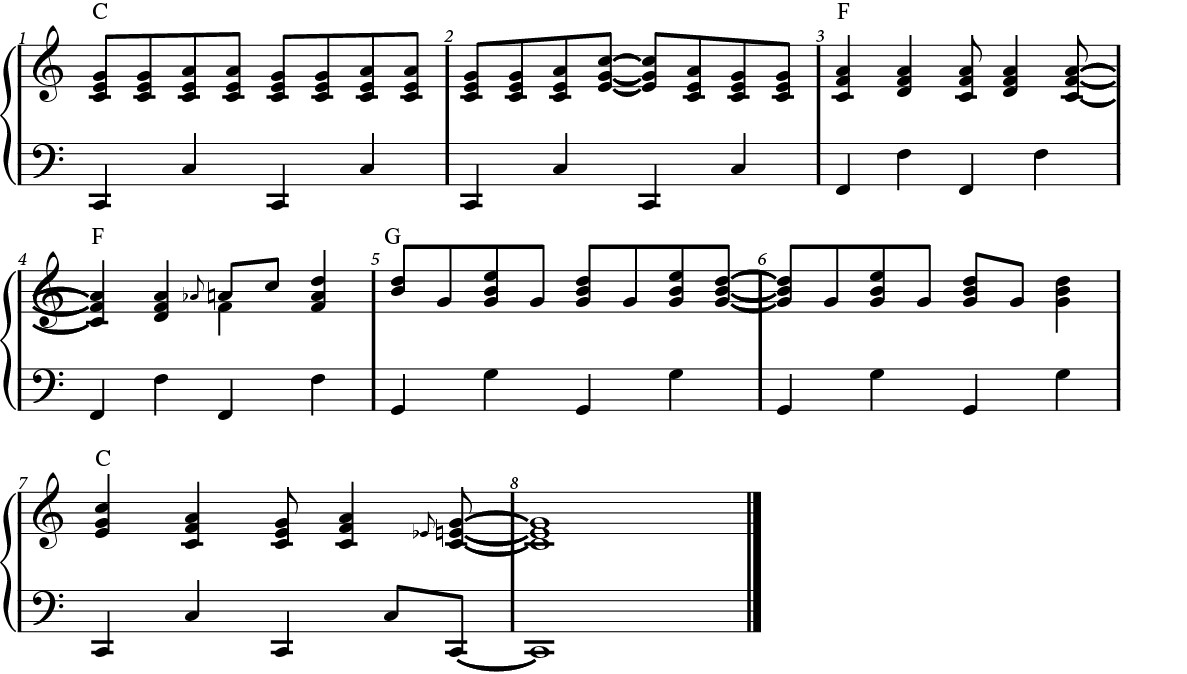 The sixth tone also works well within a major seventh chord. And let’s not forget about the suspended chord (i.e., the suspended 4th) as a way of adding movement. Here’s a comping figure that makes use of all these concepts:

And here’s an example that keeps moving the C, D and E notes across the changing chords:

Putting the third in your left hand creates a nice open-sounding voicing for the Sus2 chord. This can be done whether your bass player plays the root or uses the third instead:

Here’s that technique applied — perfect for a pop ballad approach:

This example employs the same type of voicings as before, but with a few cool twists. In bar 2, the moving figure uses both the 2nd and the 6th, and in the second half of bar 4, the chord is arpeggiated downward. Rolling through a chord voicing is a great way to add movement without being too busy: I do it again in the next bar with the inversion of the sus2 voicing, adding the B note for more color. Bar 6 has an especially effective chord voicing: Instead of just playing a G over an F bass, I add the C above, which creates a little tension that resolves when the triad moves down to the F major. This came from playing the same notes I had just arpeggiated, giving the performance good continuity and structure.

Starting in bar 7, I wanted a little more power, so I added the octaves in the bass, and then doubled the G in the Csus2 voicing on beat 4 so my right hand chords could get a little bigger, and have good voice leading throughout bars 8 – 9.

As we saw earlier when we inverted the Csus2 voicing, you can attain a nice open sound by building your chords with 4ths in your right hand. Here’s an example of how you can move things around using a mixture of 4ths and some triads. Note that I finish each chord’s climb with a colorful voicing that adds a little “crunch” on top:

I wouldn’t go too crazy using this idea in pop and rock settings, but used tastefully it can add some sophistication and color to your playing.

Coming next month: Putting It All Together – Pop/Rock Playing